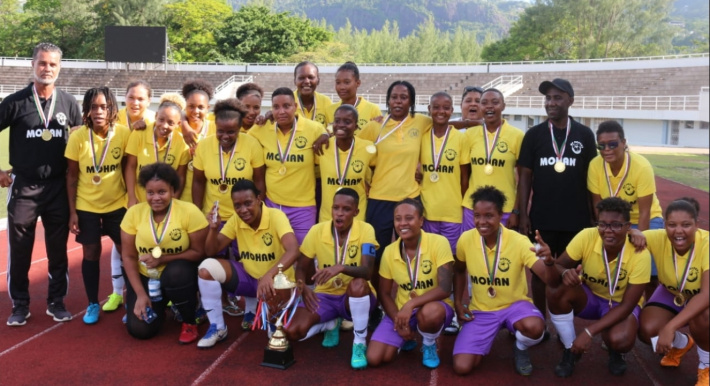 After years of absence, women’s football has made its comeback on the local sports scene with Mont Fleuri Rovers winning the first competition hosted in the new sporting era.

The six-team league was the latest move by the local football governing body to boost female participation in sports, precisely football.

Mont Fleuri Rovers, under the guidance of coach Gerald Gonthier, won all their five matches, scoring 51 goals and conceding only two, earning them a maximum 15 points.

Team manager Damien Jean thanked his players for their outstanding performances and equally thanked coach Gonthier for his knowhow and great contributions towards the team’s success.

He noted that the competition was a good start towards the reintroduction of women’s football, even if it was not that exciting due to the difference in the level of the six teams.

Mr Jean equally thanked the SFF for the initiative, while encouraging all registered clubs to consider having a women’s team as part of their camp.

Marine Maintenance concluded the league in second spot overall on 12 points, following four wins and a loss in five matches.

Their goals statistic is 17 for and two against.

Mont Fleuri and Anse Royale each played only four matches, registering losses in as many games. The former ended the league one spot above on goal difference.

The last time Seychelles’ women’s football was in action was last year at the Council of Southern African Football Associations (Cosafa) Under-17 tournament where the girls put up a brave performance, despite conceding a huge number of goals, exiting the competition after the first round.

After losing to South Africa and Madagascar in their first two matches, our young girls managed to find the back of the net for the first time in their third match, despite losing to Botswana.

The Seychelles’ selection lost 1-14, with Kimberly Chang-Ta-Hue scoring the country’s first and only goal at the tournament from long range.

Out of the tournament after three losses, Seychelles conceded 59 goals – 28 against South Africa, 16 against Madagascar and 14 against Botswana – while scoring only one.