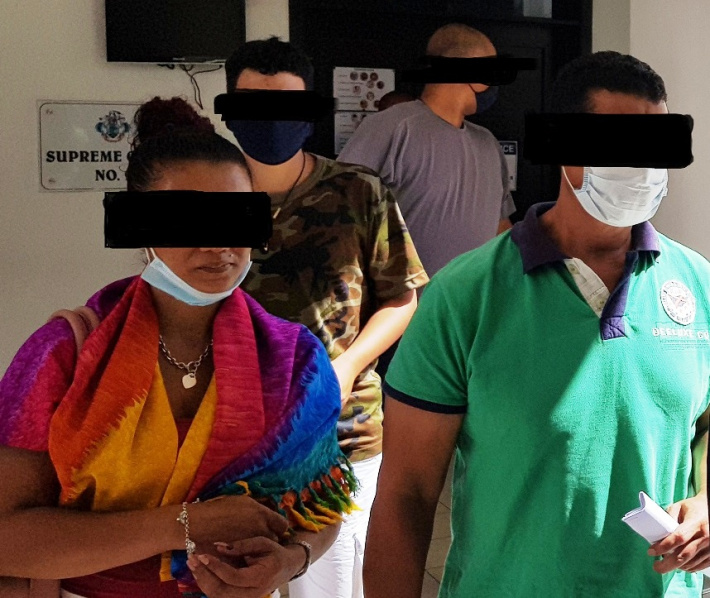 The suspect, accompanied by members of his family, after his appearance before the court yesterday (Photo: Patrick Joubert)

The incident happened in December 2018 when the suspect from Anse Royale who was involved with an international drug trafficking network, did not pay for drugs imported in the country and that resulted in a 39-year-old man being held captive abroad as guarantee until the money is paid.

The two cases which amount to 25 years imprisonment or a R800,000 fine or both, were put forward by state counsel Steven Powels. In his presentation, he stated that the police received information that a man whom his family had declared missing, was probably being used as a guarantor in a drug payment transaction in a foreign country. He claimed that the 39-year-old man who was presumably working for the suspect, was sent by the suspect to that foreign country. The missing man, on his part, had told his brother that he was going to work on the outer islands but after not hearing from him for a number of days, his brother learned from their mother that he (the missing man) was not on the outer islands but was rather in Dubai.

When they tried to call him on the same number, a foreigner answered the call and told them that when money is paid for drug dealing, only then he will be able to return to Seychelles.

Still according to the prosecution, four people were involved in the drug transaction and two have already paid their shares of the deal while the two have not yet paid theirs.

It is believed that the 39-year-old is being held hostage either in Iran or in Pakistan and other Seychellois have also been sent abroad on such transactions in the past by the same particular local criminal group, involving the suspect.

The suspect, who did not have a legal aid to represent him, denied all allegations against him. Until he (the suspect) finds a legal advisor to defend him, Mr Powel demanded that taking into account the gravity of the offence and to prevent him from interfering with future suspects in the case or leave the country, he be remanded in custody. He will reappear before the court on November 13, 2020.