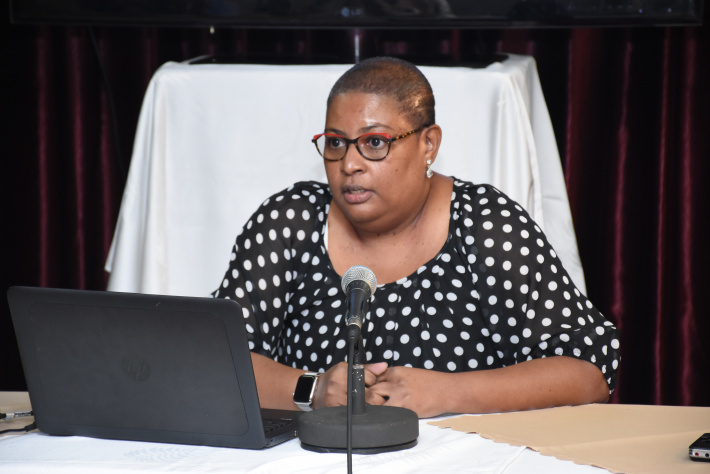 Central Bank governor Caroline Abel yesterday once again called on each one of us to be responsible in our behaviour as the economic situation is not getting any better.

She called for “collective responsibility, accountability and sharing of losses for a new sustainable economic landscape”.

Speaking at a press update held at ICCS, Governor Abel noted that the demand for foreign exchange remains persistently high, cautioning that if demand is not stabilised, there is a risk of further depreciation in the rate, as was the case in April when both supply and demand of foreign exchange fell sharply.

“It does sound like an old record that we keep on playing, but unfortunately the community is not yet aware of the gravity of the situation. We have to keep reminding ourselves that the situation in the world such as lockdowns in our key tourism markets have direct consequences for our economy. At this point a shift in individual and collective behaviour is critical,” stressed Ms Abel.

She also talked about a collective responsibility, accountability and sharing of losses for a new sustainable economic landscape. “Our tourism sector is being affected a second time and we might not see a limited number of visitors in the months ahead. The call of the CBS is that the economy remains extremely fragile and it is extremely important that the behaviour across the economy is changed such that we can maximise the resources available to us and that the government takes note of the policy orientation for 2021 in light of the uncertain impact that this will have on revenue generation which will affect its expenditure.”

As of October 28, 2020, the Foreign Exchange Reserves stands at US $569 million of which US $431 million can be used as Net International Reserves.

The governor noted that due to persistently high demand for foreign exchange CBS has over the month of October 2020 sold US $2 million and had a bilateral sales of US $700,000 to STC, bringing the total to $22 million sold through auction between the period of April to October, while STC has over the same timeframe acquired US $8.5 million (STC), and the Seychelles Petroleum Company (Seypec) US $7.2 million, through bilateral sales.

Governor Abel warned that the situation is steadily worsening on account of low foreign exchange revenues.

Being aware of the situation and the downturn of the local economy, newly elected President Wavel Ramkalawan has met with CBS twice within three days, for serious dialogues about how to move forward and revitalise the domestic economy.

“When we met with the President, he asked us to be very open and frank and as I meet with the press every week to update them on the situation, I also updated the President in the same manner, with more details and information. He is aware of the present reality and the dialogue between him and us will continue,” Governor Abel stated.

As from next week, CBS will engage in further discussions with the government, as well as stakeholders from trade and commerce.

On account that the situation does not look as though it can be addressed or rectified in the immediate, Governor Abel noted that it will be unsustainable for the economy to make provisions for the 13-month salary and other such bonuses. Furthermore, she advised that the private sector has already implemented salary cuts, and that the same should be applied to public service, especially on account of the downturn of 19 percent in the domestic economy, a significant loss for the country.

On concluding, Governor Abel also denied rumours about her leaving the Central Bank. “Let me be clear to the public, I signed a six-year contract in 2018 and I have full intention of fulfilling my contract as long as I can.”