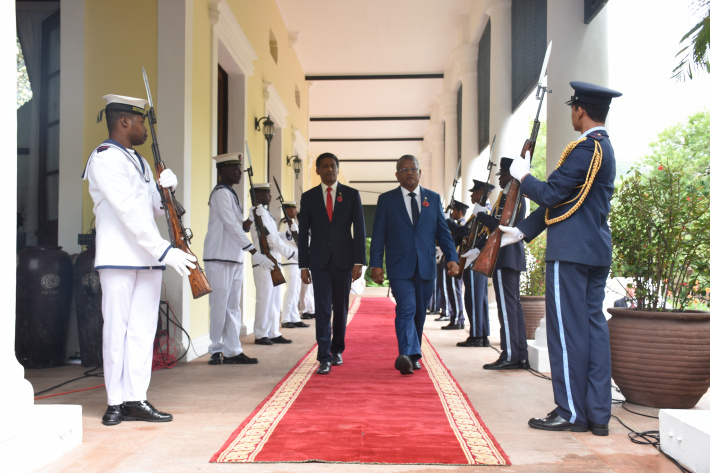 After last week’s public take on the election and swearing-in of President Wavel Ramkalawan, the public once again shared its views on yesterday’s ceremony at State House.

In the limelight were 11 of the 13 handpicked new ministers who were officially sworn in, to start discharging their duties immediately.

The most talked about however was the farewell of former President Danny Faure from the State House, an emotional and unprecedented departure.

Twenty-five-year-old Marcus Hoareau, a young professional who has been pushing for a better and more inclusive system for the youths, noted Mr Faure received a “spectacular send-off”.

“President Ramkalawan echoed words of patriotism and national unity in his speech, actions and in his conduct throughout the ceremony. Really impressed by this one!”

Asked on his point of view of the new cabinet, Hoareau said “it would seem that most of the proposed and now approved ministers have some sort of financial know-how, which I believe should be a plus in them delivering as ministers. In the sense that they would better handle the cash flow in their ministry. Let us be honest, mismanagement of public funds was apparent in some of our ministries.

“Also, we have a good line-up of technocrats as ministers and regardless of what certain politicians believe, I do not believe that once a technocrat takes office as a minister he becomes a politician. If we keep politics out of our ministries, I see the new ministers as qualified professionals delivering in their field of expertise for the good of the whole country and not for political party mileage!"

Rachel Lionnet, 32, said: “I was touched by the gift to former President Faure. This shows the true friendship that both men share with one another despite political opinions. I admire and respect the former president for bowing out with grace and honour and I have so much admiration for our current President in the manner he handled this whole ceremony. His speech was one that called on unity and he stressed that we are all Seychellois who should be working for the betterment of our beloved Seychelles. President Ramkalawan has been impressive so far!”

“As for the new ministers, I am so happy to see that we have the young Miss Devika Vidot. A breath of fresh air! To see others who are specialists in their respective fields as well means that we finally have ministers who will know how to lead. It is also nice to see a balance of men and women. I have high hopes for this new cabinet!”

A sentiment it would seem that was shared by our other respondents such as Lina Havelock, who is hoping to see some real change in government offices.

“We have competent men and women, and I hope that they serve the people of Seychelles as anticipated,” stated Havelock.

“It was a very emotional send-off for our former president, so thoughtful of President Ramkalawan. Meanwhile, the swearing-in ceremony of ministers was very diplomatic and well organised, and Mr President did a very good speech that was really encouraging and aspiring also.”

Amanda Albert, 30: “I am touched by the way he (President Ramkalawan) addressed former President Danny Faure. Real patriotism, a true leader with a heart for forgiveness and under his eyes we are all equal. Let us all work together for a better Seychelles without division.”

She noted that she is satisfied with the cabinet of ministers, adding that Seychellois should give the newly sworn in ministers a chance to prove themselves.