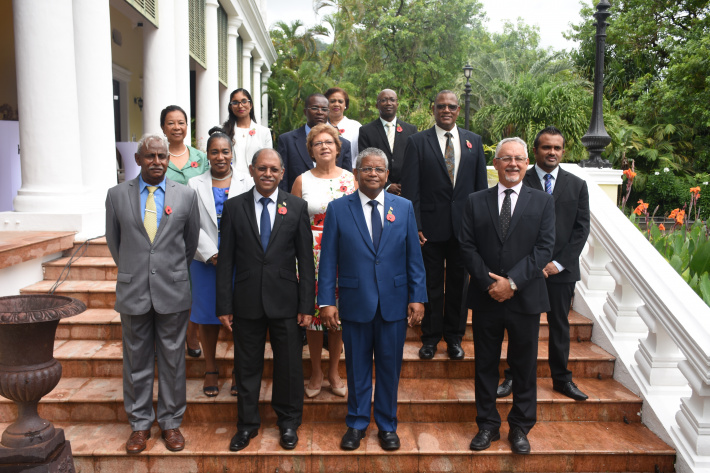 Eleven out of the 13 new ministers forming President Wavel Ramkalawan’s new cabinet were sworn in at State House yesterday morning.

The two remaining ones – Sylvestre Radegonde and Billy Rangasamy, who recently returned to the country – were still in quarantine and will be sworn in due course.

After the arrival of President Ramkalawan and First Lady Linda Ramkalawan, all those present joined in for the National Anthem, after which the ministers took their oath of allegiance, official oath and oath of secrecy in order of their ministerial ranking (as listed above).

Following this important ceremony, President Ramkalawan addressed the ministers with these encouraging words: “I congratulate all the men and women who took on this responsibility to work as a team for the country. Through your examples, you will instill the spirit of working hard and also raise the moral standard in our society. It is important to give our children the energy required to carry on. We already started the work and I urge all the ministers to go back in your ministry and encourage those who are weak to garner courage to work in a spirit of love. This will give the youth hope for the future. This is what I expect from you all. Seychelles depends on us and depend on you all ministers. Already when you presented yourselves in the National Assembly, people acknowledged your capacity and we are here to work as a team to give the country what is best.”

Following the swearing in ceremony, the new ministers including President Ramkalawan and his wife Linda, Vice-President Ahmed Afif and his wife Patricia were blessed by the Anglican Bishop French Chang-Him.

Addressing President Faure, President Ramkalawan thanked him on behalf of the Seychellois nation. “You are a child of Seychelles who served your country in the highest position. You did it with competence, loyalty and love. Under your presidency, we both were able to talk a lot on how to unite our people and how to make our people move forward. Today marks the closing of this transition and as you are leaving this office where you worked, I want to thank you from the bottom of my heart.”

Knowing his love for children, President Ramkalawan presented a painting of Danny Faure with three children as a departure gift.

Former President Faure was then invited to greet the new cabinet and President Ramkalawan accompanied him to his car amid full military honours.

First reactions from the Ministers

Designated Minister Jean François Ferrari: “It is a great responsibility and my role is to keep the team together. I have more a political role than others and I will have to make sure that the programme we have been elected upon is fulfilled and will keep working for all the people.”

Minister Naadir Hassan: “I feel a sense of responsibility and there is a lot of expectations out there. With the new reality of Covid-19, the Governor of the Central Bank has already told us the reality of our economy and from day one we have to see how to tackle the situation.”

Minister Errol Fonseka: “First of all it has been a long awaited moment for me. I always wanted an opportunity to do something for my country and I think there are more Seychellois out there who have sometimes been marginalised. The fact that I am a minister is a great privilege and I am looking forward to that. The atmosphere in the country is that the expectations are too high now.”

Minister Antony Derjacques: “I am very happy and excited because for a very long time we have been working on what changes we need and wish also to do. After 30 years of struggle, we have an opportunity to do so.”

Minister Peggy Vidot: “Today is a very good feeling. Obviously we are very aware of the amount of work that there is out there to do, but I think there is generally good feelings around and people want to be part of the change.”

Minister Rose Marie Hoareau: “I am very honoured and humbled that I have been asked to be part of this wonderful team and this historic change in our country. It is an amazing time for everyone and I think we are all very aware that hard work lies ahead but that does not stop it from being an awesome time. I am also very thankful to the President for giving me this opportunity to be part of this cabinet.”

Minister Marie Céline Zialor: “I am excited but I also acknowledge a huge sense of responsibility. Now the onus is on me to do what I always talk about.”

Minister Devika Vidot: “I am very happy with my appointment and today is not only special for me but for the generation of young professionals in Seychelles. I look forward to include them all in the future development of Seychelles. As soon as I take note of what have been done so far, we will start to implement new ideas for our younger generation.”

Minister Flavien Joubert: “First of all, it has been a surprise for me. After discussing about my upcoming work, it is a good challenge that I will be able to cope with. I will give my very best and try to make a difference. I have to make sure that by the time I leave the office, I should be able to see something I have done differently.”

Minister Justin Valentin: “I feel excited and I am determined to help my country in a different capacity. As a minister you have the opportunity to help bring the change in the system as well as in the community. We can also influence the country to come together and bring the new energy from the new cabinet to the people.”

Minister Patricia Francourt: “I feel absolutely great. It was a very moving ceremony. I think when the moment came, you come to realise that you have a lot to do but you are also ready to deliver. I feel very blessed as well to have got this opportunity.” 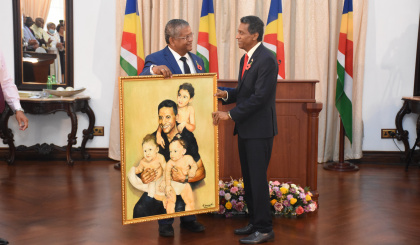 A departing gift to former President Faure from President Ramkalawan 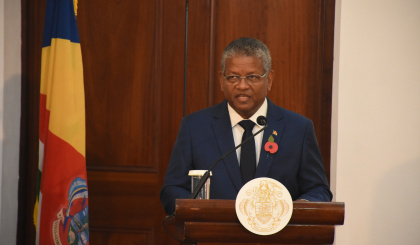 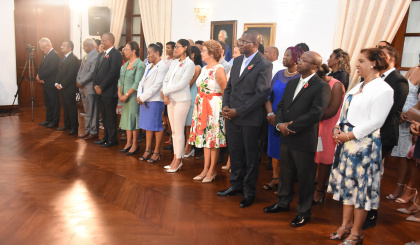 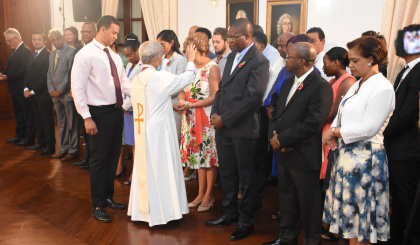