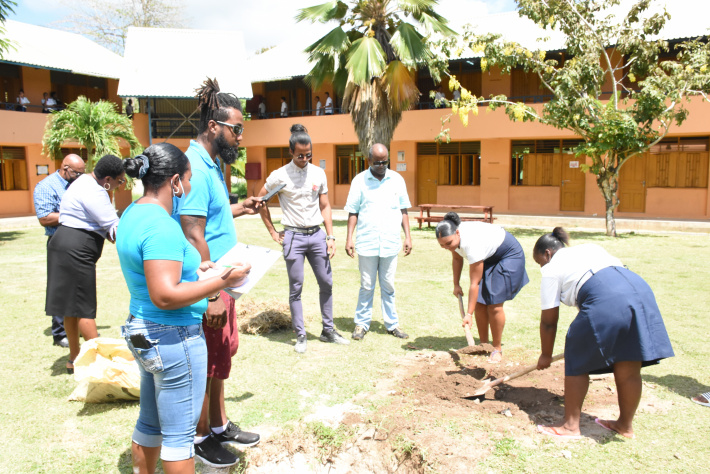 A coco de mer nut has been planted in the Anse Royale secondary school compound as a symbol for aspiring students to take up teaching as a profession.

The nut was planted yesterday morning, in the centre of the school’s compound, by the school’s head teacher Bergitta Labonté and council chairperson Nigel Henrie, in the presence of staff from the Seychelles Islands Foundation (SIF), teachers, students including two primary six students from the Anse Royale primary school and other management staff.

During Teachers’ Week, from October 4-10, the then Ministry of Education and Human Resource Development launched the ‘Aspiring Teachers Club’ in all secondary schools in an effort to attract more young people to the teaching profession. So to spread the message further, a tree-planting activity was organised in all secondary schools as a symbolic gesture towards supporting the nationwide campaign to attract and recruit the best students as teachers for the ongoing development of the country.

Anse Royale secondary school had opted to plant a coco de mer tree on the occasion but had to plant a palm tree instead as it had not acquired the nut in time. The coco de mer nut is expected to take around 25 years to bear fruit.

It was Mr Henrie who initiated the idea and sponsored the nut. He said he wanted to do something special for the school in terms of planting a valued tree, like the coco de mer, which will symbolise the importance of a strong education accompanied by values to help develop the students moving forward.

“We hope that in the next 25 years when the tree flourishes, Anse Royale school will also be in the flourishing momentum, providing good students thanks to the good guidance of the teachers,” he said, noting that results always come in at the end, referring to the time it takes for the coco de mer tree to bear fruit.

Without any possibility of knowing its sex, Mr Henrie said that, without having any problem with gender, he hopes in this circumstance, the nut is a female that will grow to bear fruit.

Head teacher Labonté said the school is probably the first in the country to have a coco de mer tree planted in its compound. She further added that they felt proud and honoured to have such a tree and are looking forward for its continued growth and well-being until it bears fruit.

She noted that the tree will symbolise the amount of investment needed to get students to become good citizens and for them to help in the development of the country.

“Our school’s mission is for us to groom our students to be responsible citizens and we know it takes years to mould them into becoming good citizens. So having the nut signifies all the investment we have to put in before we can reap the fruits,” said head teacher Labonté.

Mr Henrie and Mrs Labonté were joined by students and teachers who shoveled the earth and watered the nut. They also fenced off the nut with a fence constructed by the students. The nut from the Vallée De Mai Unesco reserve on Praslin and purchased from SIF, has been mapped on the global positioning system (GPS) by SIF staff for tracking procedures in case it is tempered with or moved. Also, in case it does not germinate after six months, it will be replaced with another.

The students said they were very proud to have a coco de mer planted at their school and they will take care of it and do their utmost to prevent it from dying. They noted that they want to see it bear fruit even though they will not be students at that time.

“I think it will be the duty of all of us here to see that the nut is well taken care of. As for myself I want to see it grow and bear fruit even though I will not be a student at that time,” said 14-year-old S3 student Abira Louange.

“I have never touched a coco de mer nut before. It is my first experience touching one. I am very eager to see how it germinates,” said 11-year-old P6 student Shane Thérésine.

He further said he will be among those who will get involved in caring for the nut when he moves to S1 in 2021.

The accompanying photos show some highlights of the tree-planting ceremony yesterday. 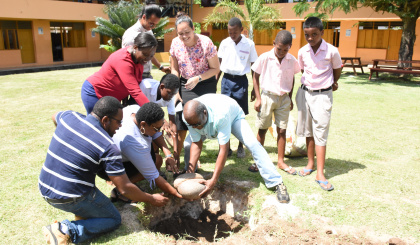 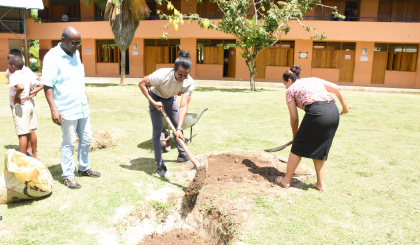 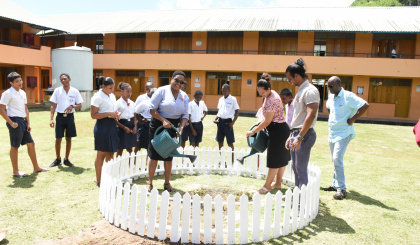