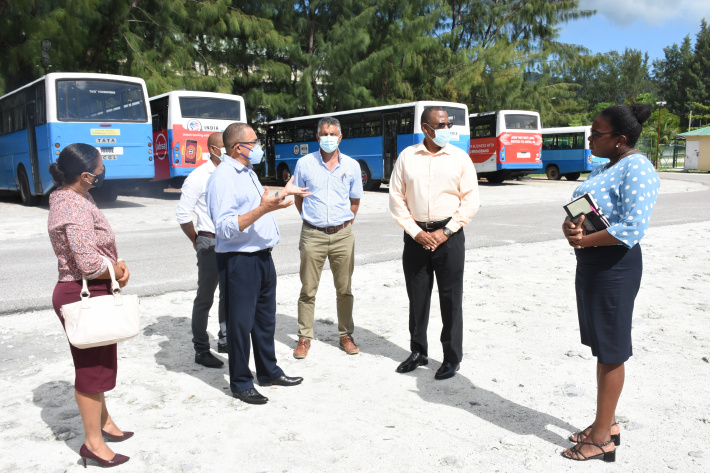 At the Ile du Port depot

In his endeavour to familiarise himself with each agency and authority under his ministerial portfolio, the newly appointed Minister for Transport, Antony Derjacques, yesterday visited the Seychelles Public Transport Corporation (SPTC).

He has previously visited Port Victoria and the International Airport as part of these familiarisation visits.

During the tour which began at the Victoria Bus Terminal, Minister Derjacques was accompanied by the SPTC board chairperson Andy Moncherry and chief executive Patrick Vel.
The ministerial delegation visited the Ile du Port Depot and also the New Port offices, along with the different mechanical workshops, before having a meeting with the corporation’s senior staff members.

Minister Derjacques explained that the main aim of yesterday’s visit was to see and study whether the SPTC’s policies are being met and also to see if the corporation has a five-year plan.

He said he has been briefed that the five-year plan covering structure and finance, as well as professionalism and competency is presently being worked on and will be submitted to him by the end of December 2020.

He also explained that studies do show that the SPTC cannot meet its cost with the present price of bus fare which is R7 and it is necessary to see whether it needs to be increased.

If this is done, he said, it will have to be carried out in conjunction with the government and other agencies, since it will be too much of a shock to simply raise the price of tickets.

Minister Derjacques further explained that according to studies, a R10 ticket would help the corporation, while a R12.50 fare will only cover the costs.

The transport minister further added that during the tours, he noticed that most of the resources, including infrastructure and vehicles, were old, while the SPTC is finding it difficult to maintain them due to its low income.

He explained that the corporation, along with the government, will have to work on new policies on how the latter can assist in improving the quality of services given.

He also pledged full support for the SPTC on behalf of the government, since the corporation had been neglected in the past.

The SPTC was established in December 1977 to cater for the commuting needs of the people.

Since then, the corporation has grown to offer an expansive range of services to cater for daily needs of the Seychellois people, including special hires, private jobs and advertising opportunities.

At present, SPTC is the only public transportation service provider in Seychelles, and its services operate on the islands of Mahé and Praslin.

Bus services operate throughout the day, from 0530hrs to 2030hrs.

Special night circular services at 2030hrs operate from Monday to Saturday, tracing the Northern and Southern parts of Mahé, at the cost of R10.

All day fare trips cost R7, while the air-conditioned services are at R15. 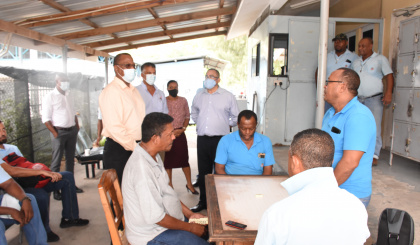 Interacting with some members of staff during their break 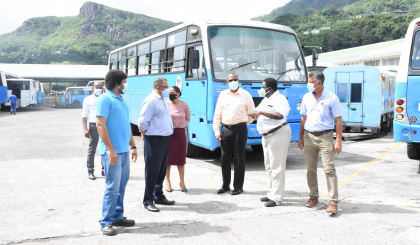 At the New Port depot