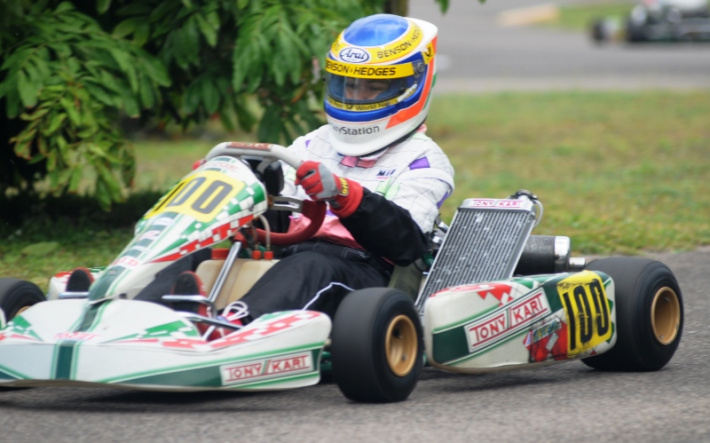 The final of the seven-round 2020 SF1 karting championship was held last Sunday with Liza Rene-Cosgrow (OTK Kosmic) winning the title, piping her father Dave (OTK Tony Kart) by a mere 0.352 seconds and three points at this last race.

On a cool Sunday morning where most of the competitors were preparing for a rainy day, the weather proved perfect for racing at the Champions Park Raceway, Roche Caïman.

In the 10-lap pre-final, Liza made a good start and held off Dave for the entire race, while behind them drama ruled. Steven Rosalie while on the warm-up lap, stalled his kart just at the green light and could not get it started, a similar issue to his last round. As for Rennick he ran well for three laps, but noticed that his tyre was wearing rapidly and decided to pull up in to the pit to save it for the final, while Roland slowed towards the final few laps after feeling a loss of power though he eventually finished third.

In the 10-lap final, Liza again got off the marks better with Dave alongside her, but Roland tried to split them into the first corner but was cut up by Dave. Liza held off Dave’s challenge for the first four laps until he eased off to conserve his tyre in order to make another attack towards the end which was well read by her daughter as she created a good gap in that time to stay ahead. Still behind them there were problems arising, first with Rennick who was determined to beat Steven in the championship with a good finish, but lady luck was not on his side again when he flooded his engine, and with the delay by his pit crew getting to him, there were just two laps to go and he would not be classified as a finisher. Roland, who was lying third, lost a chain on the final lap and rolled to a stop letting Steven who was not far behind to claim third place. Roland was classified fourth, however as he had completed the required distance.

At the finish line, Liza had just piped Dave by a mere 0.352 seconds which made the big difference in winning the championship.

The final championship table is as follows:

The 2020 SF1 season will close with their Super Final Grand Prix on Sunday November 29.