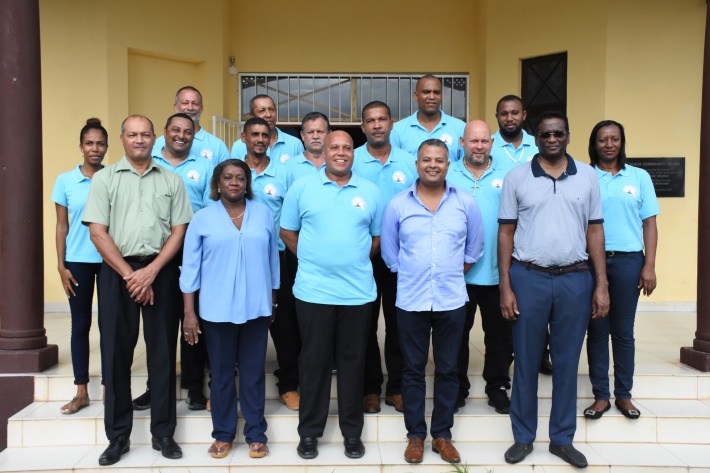 Members of the association in a souvenir photo with guests

The fishermen community of Glacis will now be in better position to make their voices heard in relation to the development of the fishing industry in Seychelles and especially in regards to sustainable fishing now that they have teamed up into an association.

The Glacis Fishermen Association, along with its logo, was launched on Saturday afternoon by the Minister for Agriculture and Fisheries, Charles Bastienne, the elected member for Glacis in the National Assembly, Regina Alcindor, and the chair of the association Darney Barbe, in a small ceremony held at the district community centre under the theme ‘Fishing Sustainably for the Future’.

The idea is to group the fishermen together so that they get to speak as one when it comes to dealing with government, stakeholders and partners on issues related to fishing. The objective is to promote, protect and defend the interests of the Glacis fishing community.

Also present at the launch were the Speaker of the National Assembly Nicolas Prea, United Seychelles’ proportionally elected member of the National Assembly Sebastien Pillay, the principal secretary for Fishing Jude Talma, members of the Northern Regional Council, partners, the Glacis fishing community and other association members of the fishing community from other districts.

During the ceremony the proposed concept plan for the start of the long awaited construction of fishing facilities for the benefit of fishermen in the district was unveiled by the Seychelles Fishing Authority (SFA).

The facilities include a fish market, ice plant, gear store and mooring area among others.

SFA’s Andre Bristol who was doing the presentation on the project said the plan is not final as the authority will seek further inputs from the fishermen in the community before tabling it for final approval.

If the plan is approved, construction work will start by the end of the year.

Addressing the gathering, Minister Bastienne said that government always supports initiatives that bring people together for the same common objective.

“An association for fishermen in the district is very important especially with the new approach government will be undertaking with regard to fishing. Our comprehensive fishing strategic plan that we are still working on will certainly value fishing associations,” Minister Bastienne said, noting that although with varying opinions, a fishermen association should not only be there to put pressure on government but also to create an atmosphere of unity among its members, with fellow associations from other districts and also with other partners and stakeholders.

Minister Bastienne further said that now it will be easier for government to identify who to call in as representatives of the fishermen for discussions.

Taking the stand, MNA Alcindor said the association has brought together fishermen of all ages and gender with diverse fields of experiences, interests and opinions.

“This association will bring together fishermen and other people with great interest in fishing be it artisanal or semi artisanal and my wish is for the association to remain active and to live up to the spirit of unity and to work for the interest of the fishing community of Glacis,” Hon. Alcindor said, noting that many families depend on revenue derived from fishing.

Hon. Alcindor urged the association to always bear in mind the concept of sustainable fishing in all of its activities.

The chairman of the Northern Regional Council, Brian Julie, also had words of encouragement to the Glacis Fishermen Association noting that it can count on the support of the council.

Most of the fishermen who talked to Seychelles NATION said that having an association as a legal voice will help sort out long awaited issues especially with regard to promises made by the authority.

“Fishermen from Glacis have been working in all kinds of difficulties for a long time and we have been promised many things that have never been delivered and now I think things will move,” said Andre Barbier.

Mr Barbier also expressed his happiness that soon Glacis fishermen will have their own fishing facilities with a plan that has been put forward as they are tired of transporting fishing gear up and down, crossing the road or having to go to Bel Ombre to get ice.

The idea for the association was initiated in 2017 and the executive members on the committee were elected by the fishermen in a meeting held in February this year. It was registered as a legal association in April.

There are at least ten fishermen associations in the districts on Mahé, Praslin and La Digue. 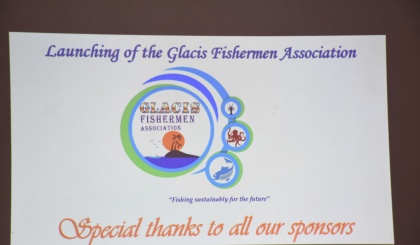