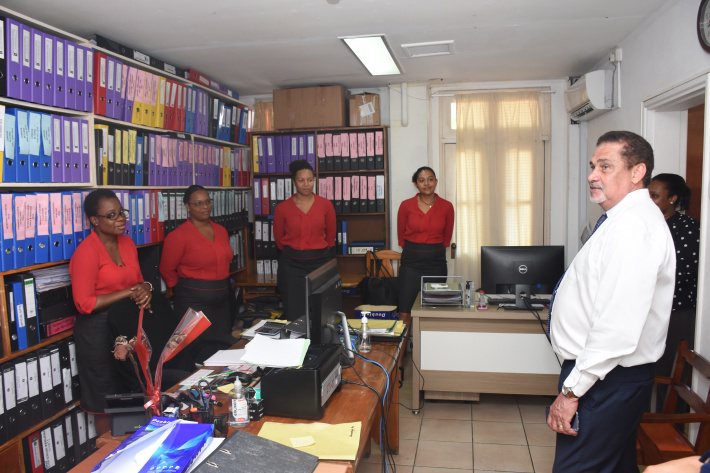 ‘Promoting Seychelles abroad should be a joint effort led by embassies’

The department of foreign affairs through its embassies along with the department of tourism and the Seychelles Tourism Board should work as a unit in promoting Seychelles as a destination, newly sworn-in Minister Sylvestre Radegonde has said.

Being given the responsibility of Foreign Affairs and Tourism, Minister Radegonde, who sworn in yesterday morning at State House in front of President Wavel Ramkalawan, said diplomatic work is not solely about attending cocktails, but is equally about promoting the country, especially in the tourism area.

He was speaking after a brief courtesy visit at the Maison Quéau de Quinssy, headquarters of the foreign affairs department and the Botanical House where the tourism department is based.

He pointed out the issue of space and better working conditions for the staff.

At the Botanical House, Minister Radegonde was accompanied by principal secretary for tourism Anne Lafortune, and Seychelles Tourism Board (STB) chief executive Sherin Francis. He visited the various offices and divisions of the two entities.

Speaking about how to combine the two departments under his portfolio, Minister Radegonde said from now on, promoting tourism will be one of the main activities of the embassies.

This, he said, is part of the new strategies brought up by President Ramkalawan to set things straight.

He further explained that especially with economic difficulties due to the coronavirus (Covid-19) pandemic we need to combine all the resources and all embassies should make it a priority to promote Seychelles.

Minister Radegonde added that in countries where Seychelles has embassies and STB offices, it will be more feasible to combine the two under the roof of the embassies.

The new Minister for Foreign Affairs and Tourism, who has accumulated over 30 years of diplomatic work, will be based at the Maison Quéau de Quinssy.

Among various positions held over the years, Minister Radegonde has been the Ambassador extraordinary and plenipotentiary to France, permanent delegate to the United Nations Educational, Scientific and Cultural Organisation (Unesco), the President's personal representative to the International Organisation of La Francophonie, the chairman and chief executive of the Seychelles Tourism Board, principal secretary in the Ministry of Foreign Affairs, Resident High Commissioner to Malaysia with concurrent accreditation as High Commissioner to India, Australia, New Zealand and Ambassador to Japan, South Korea, Indonesia, China, resident Ambassador to Belgium and the European Union with concurrent accreditation as non-resident Ambassador to Germany, the Netherlands and Luxembourg.

Our selection of photos show Minister Radegonde interacting with staff during his visits yesterday to the departments of Foreign Affairs and Tourism.