The series kick-started with an interactive presentation by the principal secretary of the department of Industry and Entrepreneurship Development (DOIED), Angelique Antat,with the SBSA Year 3 Business Management and Administration students on the importance of Entrepreneurship to any economy and to the students themselves.

PS Antat explained why students, whether employed or running their own business, should anchor within themselves, entrepreneurial values, that will surely guarantee progression in their lives.

“Entrepreneurship are values that humans foster while growing up. Each and every one of you has the option to be entrepreneurial and once you are there’s nothing stopping you from becoming a champ,” said Ms Antat.

PS Antat’s presentation was followed by four mini lectures by four SBSA teachers currently undergoing a ‘Train the Trainer’ course in Start and Improve Your Business (SIYB) with the International Labour Organisation (ILO). The lectures were titled ‘Are you ready to be an entrepreneur?’, ‘What makes a business idea?’, ‘How to create a business idea list?’ and ‘Choosing which business idea is best to pursue’ respectively.

Each soon-to-be-trainers delivered their lecture within a period of 15 minutes where they had to capture students’ attention on their respective subjects. These mini lectures were filmed and will later be submitted to the ILO to determine the ability of those teachers to become trainers themselves.

The most notable segment of the activity was the guest appearances of five Seychellois entrepreneurs – Keshra V. Bhudia, founder and CEO of the Shreeji Group; Gopi Dubasia, the director of the Shreeji Group; James Payet, co-owner of the Heritage and Cultural Education Services (HCES); Ronny Julius, owner of SeyLingo and Omegan Jean-Marie Ciseau, a young florist and event organiser. Both Mr Julius and Ms Ciseau are SBSA alumni.

Mr Bhudia recounted his life as a young child having a huge thirst for knowledge. He began his journey by accepting to work for free and gradually climbing his way up to his own accomplishment. He emphasized that if it were not for the love and support of his family, he would not have got this far in life.

Mrs Dubasia recalled the times when her father, Mr Bhudia, would encourage and direct her to join the family business at a time when she was unsure of her ambition.

She stated that if it were not for her family, she would not have had the drive she has now.

She advocated that Seychelles has countless opportunities and that SBSA is a valuable instrument for start-up development.

Mr Payet gave an account of how he and his wife’s humble lifestyle, now turned into a business, have left its mark in the tourism arena.

He remarked that although their services have been heavily impacted by the pandemic, they have been able to take this quiet time to reflect on various opportunities brought about by Covid-19 and prepare themselves on how to exploit them.

Mr Julius started his testimony from the time he was in employment straight after leaving SBSA. He was cautious as he made a life changing decision to leave his stable job to enter into his own business.

As a firm believer in specialisation, he explained that the key to the progression of his business is to have the right people and their skills. This creates opportunities for other businesses, as he taps into their skills and talents that he does not possess himself.

Last to make her presentation was Ms Ciseau who emphasised on outsourcing locally rather than importing products as it is undoubtedly more beneficial for our economy.

In her presentation, she also addressed the importance of customer service within a business and how to deal with competition.

In order to cater to different target markets and to differentiate her business, she highlighted how she is now being more innovative by introducing new products such as biodegradable flowers among others.

The series ended with a closing remark from the director of SBSA, Josianne Bristol, where she expressed her contentment and extended her gratitude to the department of Industry and Entrepreneurship Development, the guest speakers, the lecturers as well as her students.

Having participated in the department’s entrepreneurship related competition twice since last year, Mrs Bristol indicated that she was honoured that her school was part of an impactful worldwide event that is the Global Entrepreneurship Week (GEW).

“Although it was not the actual entrepreneurship week and since the students would be in their exam period during the said week, SBSA could not miss out on the opportunity of being part of GEW, and we look forward to more entrepreneurship related events and activities in the future,” Mrs Bristol said.

GEW is the largest and most visible one-week campaign affiliated with entrepreneurship, which occurs annually every November. It is celebrated among more than 170 countries with approximately 10 million people across the globe. It is a celebration of the innovators and job creators, who launch their start-ups by bringing ideas to life in order to drive economic growth and increase human welfare. During this one week, GEW inspires people everywhere through dedicated activities designed to help them explore their potential as self-starters and innovators.

Last year, the department of Industry and Entrepreneurship Development celebrated GEW on a much smaller scale. This year, Seychelles is hosting the GEW and have so far secured a number of participants and partners. Their activities have been visible as of Monday this week.

The accompanying photos show highlights of the presentations. 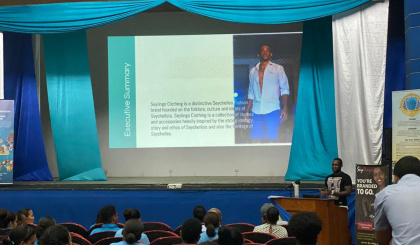 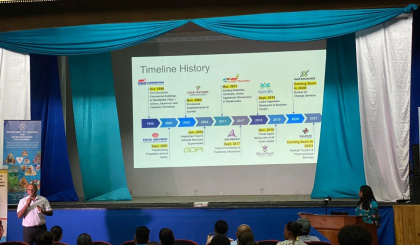