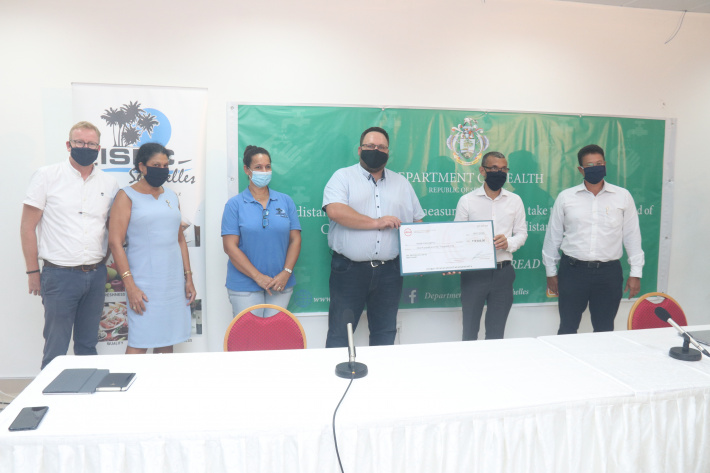 The handover of the donation (Photo: Anel Robert)

ISPC Seychelles yesterday gifted the sum of R110,000 to the Ministry of Health to fund the setting up of a new testing station in Victoria.

The cheque was presented to the chief executive of the Health Care Agency, Dr Danny Louange, during a brief ceremony at the Sheikh Khalifa diagnostic centre by ISPC’s franchise manager, Warren Fairal.

The R110,000 was raised during an auction organised at the recent ISPC annual masters golf tournament at Constance Lemuria Resort, on Praslin.

According to Dr Louange, the money will be used to furnish the new testing station soon to be operational near the music stadium in town.

“We will use it to purchase the furniture that our staff will use and this will make it more comfortable for our staff and the people we serve. This donation will go towards what is important to us right now, which is controlling and breaking the chain of Covid-19, and testing is one of those important tools,” said Dr Louange while thanking the company.

On behalf of ISPC, Mr Fairal explained how they got about organising the auction: “We decided to have a charity auction because the golfing community and ISPC were both willing to try and do something to help raise money to show that ‘the new normal’ is normal. We all have to work together now.”

Some of what were auctioned off includes nights stay in hotels that partnered with ISPC such as Lemuria and Carana Beach Hotel, gifts from businesses and ISPC itself donated some of its limited edition wines, among other items.

Although auctioned items went for much more than their original price, Mr Fairal noted that “it was not about what the people were bidding on; it was more about the community spirit of trying to raise money for what is important to all of us”.

Heavily reliant on the hospitality and tourism industry, ISPC has not been spared from the economic downfall. The company has recorded over 60% drop in revenue so far with overhead expenses that have remained the same. However Mr Fairal noted that this does not mean the company cannot do its part in assisting the Covid-19 relief.

“We knew that the money was going towards the fight of Covid-19 and the frontline workers. We know that they are working long days and long nights, and wanted to support them,” he concluded.