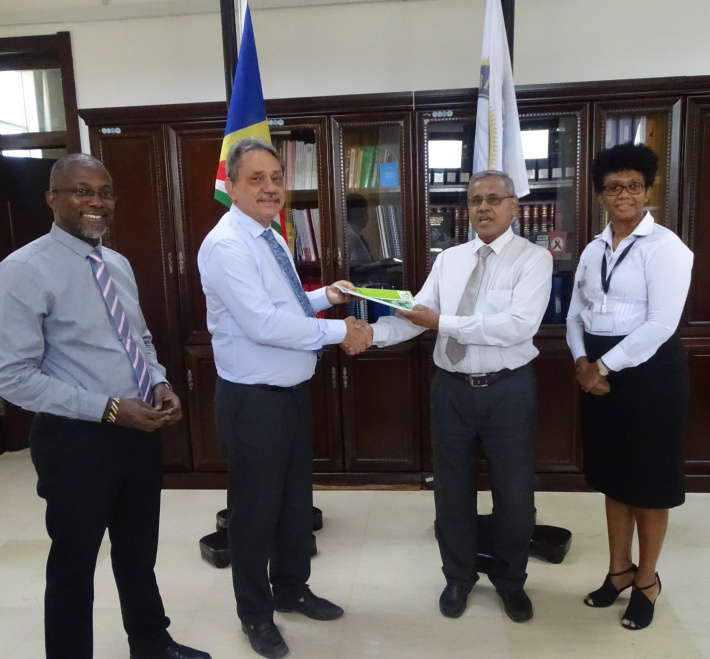 Mr Herath hands over the report to Speaker Mancienne in the presence of Hon. Henrie and Mrs Isaac (Photo source: Office of the Auditor General)

Auditor General Gamini Herath has submitted his annual report for 2019 to the Speaker of the National Assembly, Hon. Roger Mancienne, as required under Article 158 of the Constitution.

The report brings out the findings arising from the audit of government accounts for 2019 and various ministries, departments and agencies (MDAs) undertaken during the previous audit cycle.

This is the fourth consecutive year for which the report has been submitted before the end of December statutory deadline.

However, the Auditor General feels that the report could have been submitted a little earlier had it not been for the impact of Covid-19 situation.

The activity report and audited financial statements of Office of the Auditor General (OAG) for 2019 was also submitted to the Speaker under Section 26 of the Auditor General Act. This report was due by the end of June but was also delayed on account of the Covid-19 situation which impacted not only the operations of OAG but also the external auditing of the OAG.

Also present on the occasion were the deputy Speaker, Hon. Gervais Henrie and the Clerk of the National Assembly, Tania Isaac.

The Auditor General wishes to thank all stakeholders who have facilitated the realisation of the reports and looking forward to continued support in the future.

Office of the Auditor General