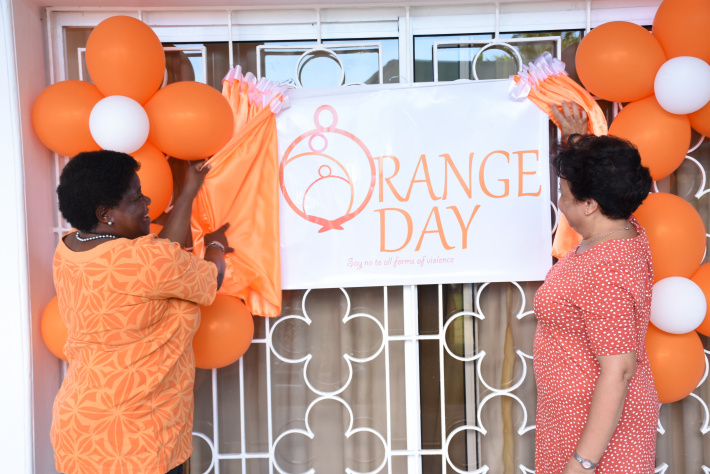 The 16 days of Activism against gender-based violence is an annual international campaign that kicks off on November 25, the international day for the Elimination of Violence against Women, and runs until December 10, Human Rights Day. The theme chosen by the United Nations this year is ‘Orange the world: Fund, respond, prevent, collect!’

The official launch of the programme here was held yesterday at the Family House, Bel Eau in the presence of First Lady Linda Ramkalawan, Ambassador Mary-Pierre Lloyd and principal secretaries from the Ministry of Youth, Sports and Family and from the Ministry of Education.

In the absence of Minister Marie-Celine Zialor as she was held up in Cabinet meeting, principal secretary for family affairs Marie-Josée Bonne conveyed the greetings of the minister to the audience and also encouraged them to help bring more awareness in the community and participate fully in the campaign.

During the celebration, copies of the ‘Gender-Based Violence’ handbook were distributed to the Ministry of Education and the Seychelles Police Force. This handbook has been produced by the family affairs department and consists of seven lessons.

Linda William-Melanie, PS for social affairs, writes in the introduction of the book that “this handbook is a vital component in the national response to gender-based violence (GBV). It is hoped that the programme will lead to the following outcomes in these institutions; the integration of GBV modules into civic education, personal and social education programmes in these institutions; the promotion of peaceful and GBV-free relationships among the students and their peers; familiarising students with cultural attitudes, personal issues and gender roles that may impact violence and crime, and GBV in close relationships.”

Tessie Victor, principal research officer within the gender secretariat, explained that “the lessons in the handbook are supplementary materials for the students to learn more about this subject through debates, discussions, group work, simulations, role plays and other methods that involve the students on fun engaging activities”.

“We want to work with the Ministry of Education to include this in their curriculum and we are working to make it a reality,” she added.

Also yesterday, young people who took part in the Orange day logo competition were acknowledged and rewarded. This competition was launched in September for students from the Seychelles Institute of Art and Design and 13 entries were received from 10 students. The logos were judged based on their design and the message the students wanted to convey.

Ms Chetty noted that her logo represents a mum, dad and the child all united in a circle and bonded with two hands. The message on the logo is ‘Say NO to all forms of violence’.

“Every day we are seeing violence against men, women and children. Not many people are aware of it, so for the design of my logo, I chose to put all three of them. I also encourage people who are going through violence to come forward as there are people willing to help,” noted Ms Chetty.

This year, due to the ongoing pandemic, the Ministry of Youth, Sports and Family is using the media to educate the population about what it is.

Ms Victor noted that this event is mainly to bring more awareness about violence in the community and for those going through trauma, there is help for them.

“In terms of abuse regarding children, we are seeing a greater awareness among the community and people are coming forward to report cases. For adults we still see a reluctance,” she noted.

At the end of the ceremony, First Lady Linda Ramkalawan stated that “for me Orange Day is not only a day for women but also for men where we all need to reflect on our behaviour and how to deal with these problems. Violence is not a way to solve any conflict. We need to reflect on the consequences and see how we can have control on ourselves and find alternative methods to solve our problems. Most of the time, violence comes out of a conflict and we must learn to sort conflicts without resorting to violence. We have to respect and be more loving towards each other.”

The first lady and PS Bonne had the privilege to unveil the new logo that will from now on will be used for Orange Day.

To recall, Orange Day was started by activists at the inaugural Women’s Global Leadership Institute in 1991 and continues to be coordinated each year by the Centre for Women’s Global Leadership. It is used as an organising strategy by individuals and organisations around the world to call for the prevention and elimination of violence against women and girls.

Until the reality of equality between man and woman is fully established and attained, the highest social development of mankind is not possible.

The accompanying photographs show some highlights of the launch ceremony yesterday. 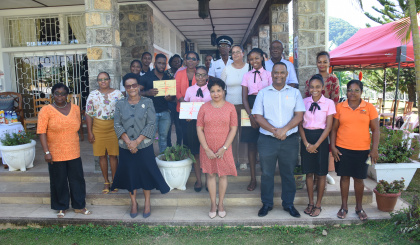 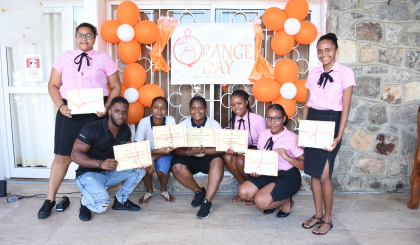 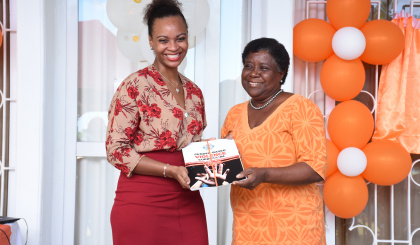