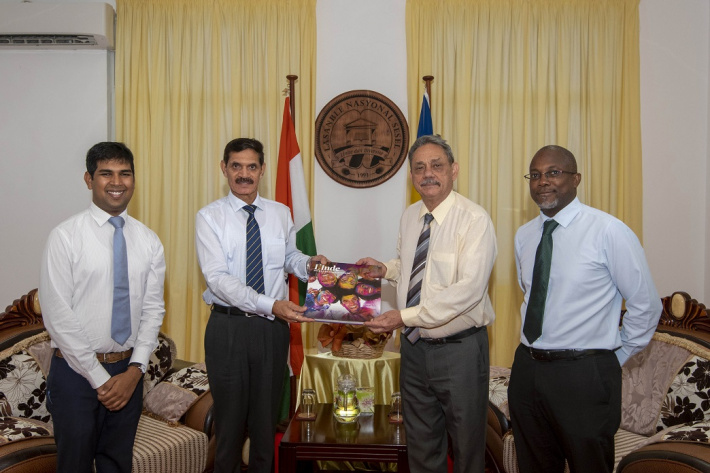 Exchange of mementoes between HC Suhag and Speaker Mancienne in the presence of Hon. Henrie and Mr Chirania

The Speaker was accompanied by the deputy Speaker, Hon. Gervais Henrie.

This is the first visit of HC Suhag to the National Assembly since the swearing in of the 7th cohort.

The meeting was an opportune time for HC Suhag to congratulate the Speaker personally on his election as the 5th Speaker of the National Assembly of Seychelles and presented him with a book called ‘L’Inde pour un Milliard de Raisons’.

During their discussions, HC Suhag expressed his great admiration for the peaceful transition of power after the election process and claims that Seychelles is surely an example to the world.

Speaker Mancienne and HC Suhag also spoke of the longstanding cooperation between India and Seychelles. The latter gave the Speaker a brief of the various small impact community projects across Mahé and other inner islands, which are ongoing and those that have been successfully completed.

Both parties discussed the possibilities of strengthening the existing cooperation by assisting the National Assembly with certain projects to enhance the work of committees.

Speaker Mancienne thanked India for its countless assistance to Seychelles, especially towards building infrastructure and contributing to national development.