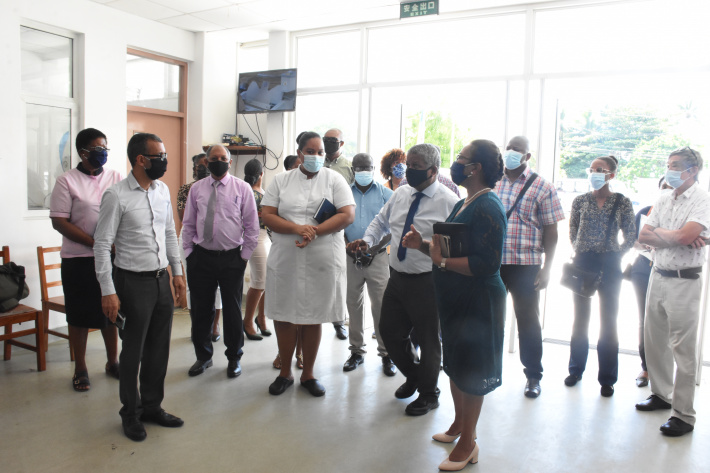 Health ministry to cut costs by more than R100m

Government has identified three areas where the health ministry can cut its expenses and those include stopping the rental of tents, moving to new quarantine facilities at Avani hotel and resuming regular service at the Anse Royale Hospital as from this coming Monday.

President Wavel Ramkalawan announced these measures yesterday morning after visiting the Anse Royale Hospital which had been turned into a quarantine facility.

The visit centred on the Anse Royale Hospital which has been converted into a Covid-19 quarantine centre since March.

The president was given a tour of the different facilities within the hospital and was shown areas where renovation works are needed.

After his visit the head of state sat down with the press and announced that they have identified three areas where the Ministry of Health can cut expenses.

Firstly, it involves replacing the tents at all health centres used for screening purposes around the country.

“We are paying R129,000 per day for the tents that we are using and through donations we have been able to get 5 x 5-metre tents from Dubai which will be in the country next week. Structures for these tents have already started going up and by mid-December we will start using tents which will cost the government nothing,” said the president.

Secondly, the ministry plans to stop spending millions by moving the quarantine centre out of Berjaya Beau Vallon Bay hotel to Avani Resort & Spa. The government is currently paying R800 per day per room which includes all utilities including food and Wi-Fi and these total R4.4 million per month.

“Starting Monday (November 30, 2020) the quarantine centre will move to Avani Resort & Spa. The facility has been given to us by the United Arab Emirates (UAE) government and they will bear the cost of the hotel and utilities,” explained President Ramkalawan.

Thirdly, the Anse Royale Hospital is another facility which is bleeding the ministry’s pockets. At the start of the Covid-19 pandemic, the hospital was closed down and turned into a quarantine centre. All services that were previously being offered by the hospital were moved to another building which the government was renting for R400,000 per month

After much deliberation with his advisors the president announced yesterday that starting December 2020 the hospital will resume regular services.

After the issue was brought to the attention of the president, he announced that starting in December all services will resume.

“With these initiatives being taken the ministry will be able to save more money which will allow the government to allocate funds for other projects which will benefit the community,” added President Ramkalawan.

The president continued by saying that there are many donors that have shown interest in helping the Ministry of Health, adding that two technicians from South Africa will be flying into the country today to replace the three elevators at the Victoria Hospital.

In December, the ministry will also be getting 10 new state-of-the-art ambulances which will be distributed around the country. The president called on all ambulance drivers to get proper training to avoid accidents which have become somewhat common.

The hospitals will also be receiving new X-ray and mammogram machines based on the recommendations of the Ministry of Health.

“We have many projects that we are working on which include the isolation centre and the construction of the La Digue hospital which is being built through a donation given to the government,” said President Ramkalawan.

The La Digue hospital will be fully equipped with private rooms, a dialysis centre, and a hospice.

The president added that as La Digue is a tourist attraction, the hospital will serve as a good marketing tool.

“We would like that the services the ministry offers are of high standards not only for patients but staff as well,” he noted.

The president also said that private investors have shown an interest in the medical field and he has brought to their attention that Seychelles is in need of a cardiovascular and oncology centre.

He added that the Land Marine company is in talks to build a private hospital.

“We welcome investors from the private sector who wish to build a specialised hospital,” said President Ramkalawan who also called on students to consider the medical field as the current number of nurses is too low.

MNA Lemiel also brought to the president’s attention the need for an outpatient clinic as many residents have to go all the way to the Victoria Hospital for dialysis.

The president reassured the MNA that he will liaise with the health ministry to address this issue and implement it in the 2021 budget which is expected to cost between R3 and R4 million.

MNA for Au cap, Kelly Samynadin, also brought to the attention of the Minister of Health Peggy Vidot the lack of home visits for elderly residents at Au Cap. The minister responded by saying that the ministry will be putting more emphasis on home visits. 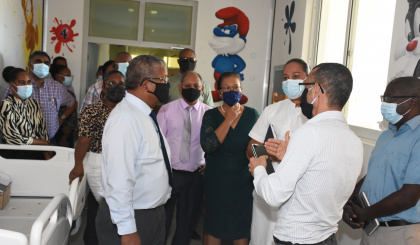 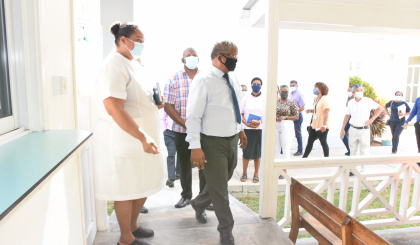