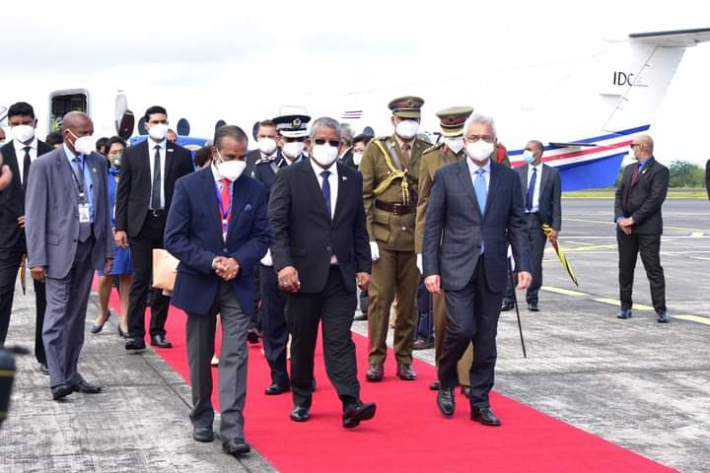 President Wavel Ramkalawan started a three-day state visit to Mauritius when his aircraft, an IDC Beachcraft plane, landed at 3.15pm at the Sir Seewoosagur Ramgoolam International Airport in Plaisance.

He was warmly welcomed by Mauritian Prime Minister Pravind Jugnauth upon his arrival in Mauritius and the highest dignitaries of the host country.

This is the first official travel of the newly elected President Ramkalawan since he took office following his win in the October 22-24, 2020 general elections.

At the airport, the President received a state salute from the Mauritian Special Mobile Force and inspected the guard of honour. He was then presented to the numerous dignitaries present at the arrival ceremony. The presidential delegation then proceeded to the State House at Le Réduit where President Ramkalawan paid a courtesy visit to the Mauritian President, Prithvirajsing Roopun.

During the conversation, the Mauritian President congratulated President Ramkalawan for his election as head of state and expressed the special bond of friendship that exists between Mauritius and Seychelles. Mr Ramkalawan stressed on the brotherly relations which he said should always be nurtured.

Today, a one-to-one meeting is scheduled between Prime Minister Jugnauth and President Ramkalawan at the Prime Minister’s Office in Port Louis. He will then have a working session with a Mauritian ministerial delegation at the National Assembly before signing two memoranda of understanding (MoUs) with the Mauritian Prime Minister. The first relates to a closer cooperation between the police forces of the two countries to combat crime and the second will reinforce the joint actions in the field of telecommunications and information technology. After the signature ceremony, President Ramkalawan will visit the Aapravasi Ghat, a world heritage site in Port Louis where the modern indentured labour diaspora in Mauritius began. After this visit, President Ramkalawan will have lunch with the President of the Republic of Mauritius at the State House. In the afternoon, he will receive the visit of the chief judge, the speaker of the National Assembly, and the leader of the opposition. A state dinner will then be hosted by the Mauritian Prime Minister at the Sugar Beach Hotel in Flic en Flac on the west coast of the country.

On Tuesday morning he will pay a visit to the Morne Cultural Landscape world heritage site, a rugged mountain that juts into the Indian Ocean in the southwest of Mauritius and which was used as a shelter by runaway slaves, maroons, through the 18th and early years of the 19th centuries. From Le Morne, President Ramkalawan will pay a visit to the Indian Ocean Commission headquarters at Ebene where he will have a working session with the officials of the commission.

The President and his delegation will then proceed to the airport where they will take the flight back to Seychelles in the afternoon.

The relations between Seychelles and Mauritius are more than a mere diplomatic bilateral exchange because the two countries drill their friendship very deep in history, culture, and economy. It is therefore no surprise that newly elected President Ramkalawan has opted to visit the brother island for his first trip outside the country. This is indeed a warm and natural diplomatic move on the part of the President. And very bold too in these times of sanitary crisis!

Mauritius and Seychelles have so much in common that it eases the bonding. There is practically not a Seychellois who does not know a Mauritian and who entertains a long-term friendship with exchanges of visits and gifts. It is so profoundly anchored that the vibrancy of these relations has triggered so much work in common in different spheres over the decades. This has not been imposed on either side, it is just a matter of instinct. The number of mixed marriages between Seychellois and Mauritians is but a minute part of this desire to be closer and closer. The investment of the Mauritian corporate bodies in the economy of Seychelles, more visibly in the tourism industry is another testimony of this mutual sharing. The cultural affinities are always warming to witness with the common language, music, and arts. The degree of similarities on the way both countries must strive in times of crisis, be it natural, economic, or sanitary issues, underlines this proximity. The mutual support in terms of human resource development, public health improvement, educational cooperation, environmental common fronts, financial sector progress and judicial collaboration are but a limited list of already successful avenues.

Now poses the question on what both countries can charter to consolidate the existing structures and more importantly on how they can exploit some new routes until now neglected, overseen, or unevenly exploited. How can the two countries improve of their latest memorandum of understanding of cooperation to put fishing at another level on the agenda? How can the new Seychellois administration pool in together with Mauritius in their common struggle to eradicate the drug problem? How can the two countries look at each other as partners and not as brothers only? How can the two governments muster all the capacities of each nation to complement each other? The two-and-a half-hour trip between the two international airports must not deter any strong will to syndicate the efforts for a more prosperous outlook…

In as much as the exchanges between the peoples and the governments are rooted in history, it is high time for corporate bodies, professional institutions and organisations, parastatal companies, non-governmental organisations and other associations to reflect on successful plans for even warmest and result-oriented relations.

President Ramkalawan has surely pondered upon these perspectives when making his mind to have this first symbolic overseas mission of his mandate. We must have this well-wishing thought that his groundwork will be followed by the setting up of a better Mauritius-Seychelles cooperation. It is a win-win enterprise, then we better take the ‘flood that leads to fortune’ during these dynamic times. 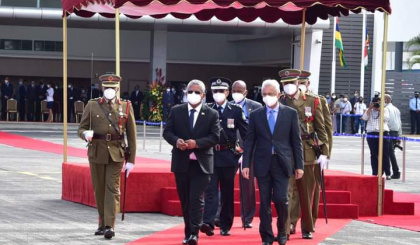 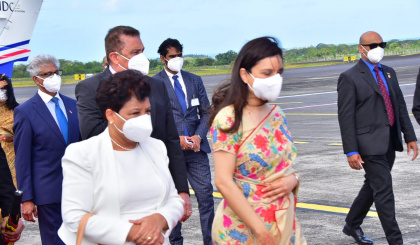