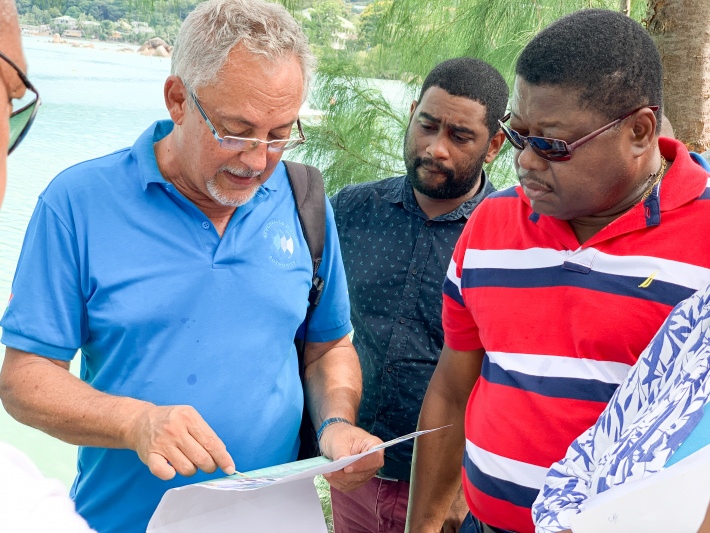 Fishing industry players urged to work together towards the same goal

“The fishermen’s associations have a fundamental role to play in managing their own industry.”

Designated Minister Jean-François Ferrari, who is also the Minister for Fisheries, said this recently on his first visit to Praslin since assuming the portfolio.

The Designated Minister visited both districts on Praslin as part of his series of familiarisation visits. He was accompanied by the principal secretary for fisheries, Jude Talma; chairman of the Seychelles Fishing Authority (SFA) board, Cyril Bonnelame; chief executive of the SFA, Nichol Elizabeth and fisheries advisor Roy Clarisse.

The visit started on Friday morning last week at Grand Anse Praslin port, which used to be the island’s main port, used for exchange of goods between Praslin and Mahé. Next to the port, the delegation viewed the fish market and proposed area for an ice plant.

The member of National Assembly for the district, Wavel Woodcock, district administrator Moses Barbe and representatives of the Praslin Fishermen and Boat Owner’s Association (PFBOA) also joined the visit and shared their views on the latest development plan of the area and agreed on what would be the most urgent requirement of the local fishermen.

The delegation then visited the district’s unused fish and vegetable market which currently falls under the responsibility of the Seychelles Agricultural Agency. It is understood that the agency has plans to revamp this facility.

The proposal to set up a five-tonne ice plant and pontoons which will provide easy loading access to relatively small fishing boats was made by the Designated Minister.

“The current economic constraints brought about by Covid-19 do not allow us to make large investments right now. So the focus should be on your most immediate needs for the first phase of development.”

Minister Ferrari gave his commitment that this first phase will be completed within six months. These will help alleviate the issue of lack of ice for Praslinois fishermen, transportation costs of procuring ice from the Baie Ste Anne ice plant and boat loading constraints.

He also intends to renegotiate the lease agreement for a building owned by SFA which currently houses a mini supermarket since he feels that such shop should not be on the SFA premises and the building should be used for a fishing related activity or business.

The visit then continued at the ‘Fish Bazaar’ organised by the SFA, which was being held on the premises of the district administration’s office. A variety of fish products processed by the SFA were on sale and a good turnout of Praslinois could be observed.

In the afternoon, the delegation moved to Baie Ste Anne where they toured the SFA premises and ice plant. They had the opportunity to interact with several of the authority’s six staff currently in employment on the island. The proposed area for the redevelopment of the Baie Ste Anne fishing port was also toured.

Minister Ferrari gave his commitment for extra mooring buoys within the fishing port area and pontoons for easier boat loading facilities to be installed within the next eight months next to a privately owned reclaimed area, opposite the Kannus Supermarket.

Meanwhile, negotiations are ongoing with the land owner and other stakeholders to move the SFA premises on the reclaimed land. This will be ideal in bringing the ice plant closer to shore and will include fuel distribution facilities, all of which will facilitate local fishermen, including those from Grand Anse with bigger boats that are unable to make use of the Grand Anse jetty. However, if the negotiations are not successful, this development will come at a later stage.

In both districts, the delegation could interact with local fishermen in the area.

On Saturday, Designated Minister Ferrari joined the Minister for Transport, Anthony Derjacques, for a joint meeting with Praslinois fisheries stakeholders. Minister Ferrari shared his ministry’s development plans for the island, especially those for immediate development and could hear the views of those present. Both fishermen associations of the island welcomed the proposals and gave their commitment to support the ministry in improving the industry.

Darrell Green, chairman of the PFA, said: “We cannot have two groups of individuals with the same aim but working against each other. The association brings together fishermen and we have the traditional knowledge which the SFA technicians might not have. When we join our ‘know how’ to the technicians’ qualifications we will definitely reap much benefit as the fisheries community and this has been one of our association’s objectives from the start.”

Richard Bossy, chairman of PFBOA, commented: “The idea of working together is a good one which we welcome. However, we hope for better support, especially financially. We cannot sustain ourselves but if we can have better cooperation from the government, then we can definitely collaborate in a more effective manner for the betterment of the industry.”

This was also an opportunity to bring forth other concerns. These included the alarming rise in illegal fishing by foreign vessels in our Exclusive Economic Zone (EEZ) and how this is currently being dealt with; the proposal for a plot of land on Eve Island to construct a slipway and repair yard which can be managed by the fishermen’s associations of the island; better demarcation of the marine national park areas and better marketing facilities for fisheries products.

The issue of the relationship between different fisheries stakeholders was also raised and Minister Ferrari called on all stakeholders to have better collaboration. “I wish for us to move in a different direction. The different agencies and stakeholders should not be working against each other. On the contrary, there should be a synchronisation between us so that we can work collectively towards a common goal.”

Minister Derjacques shared that the Seychelles Maritime Safety Agency (SMSA) will assist the fishermen in identifying the boundaries of the marine national parks which was an issue expressed.

“We shall also be working on a ‘Fishermen’s Registry’, and this will not only give more value to the fishing profession and our hardworking fishermen, but also facilitate the SFA, (for example in fuel allocation) and other stakeholders in general maritime safety.”

In relation to illegal fishing, Minister Derjacques shared the need to discuss with the attorney general the hazard caused by the apprehended boats which causes space limitation for port extension and management. These boats often become wrecks over time and causes safety issues for the port and its environment.

“In general, there is a lot of work to be done and it is clear that all the mentioned issues today are related. So we need a good coordination network between our ministry and the SFA to solve these pertaining matters.” 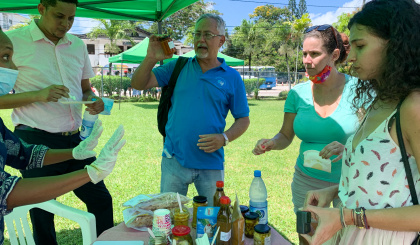 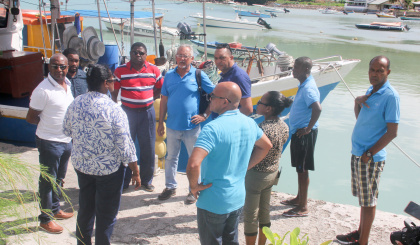 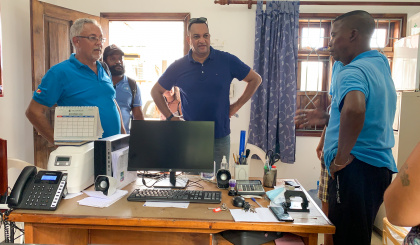