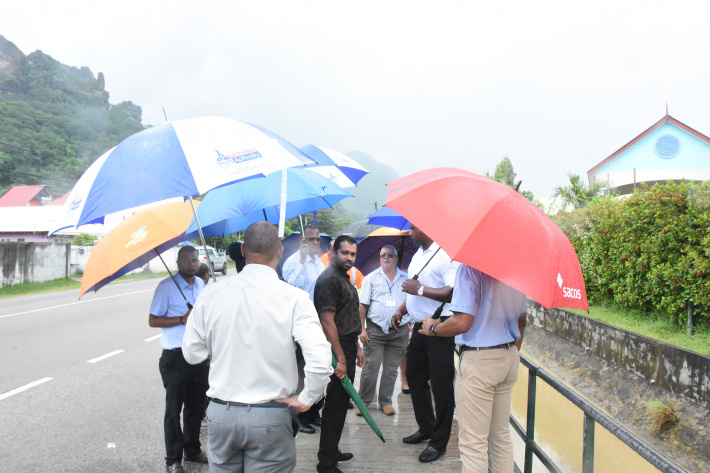 The proposed project to add a third lane to the Pointe Larue road, precisely from the Ros Torti roundabout up to the Seychelles Police Academy has been delayed due to some wayleave issues which are still being discussed with landowners.

Chief executive of the Seychelles Land Transport Agency (SLTA), Parinda Herath, gave the latest details regarding the project yesterday after leading Minister for Transport Antony Derjacques and his delegation on the site of the project which will be carried out in three phases.

During the tour, engineers and technicians of the SLTA briefed the ministerial delegation on the different aspects of the project, including the advantages, as well as other issues which have been causing delays.

The first phase which, other than the third lane, will also include better drainage and pavement, will go up to the Amalgamated Tobacco cigarette factory.

Present during yesterday’s visit were principal secretary for transport Patrick André, chief executive of the Seychelles Civil Aviation Authority (SCAA) Garry Albert, as well as members of the National Assembly (MNA) for the three districts – Cascade (Philip Monthy), Pointe Larue (Conrad Gabriel) and Anse Aux Pins (Clifford André) – which will be directly involved in the project.

Mr Herath explained that the authority is still in discussion with landowners to reach an exchange agreement regarding the wayleave.

A wayleave is normally the right of way granted by a landowner, generally in exchange for payment and typically for purposes such as laying of pipes, or in the specific case, the permission to use part of their property for road extension.

He also explained that with the new project comes better drainage which will mitigate the flooding problem which has been affecting the Pointe Larue district over the years.

Mr Herath further explained that the plan for the project has been finalised and with the support of the minister and the MNAs regarding the wayleave issue, early next year they will set the ball rolling.

He also added that the encroachment – to gradually move or go into an area that is beyond the usual or desired limits – will benefit everyone in the region, especially in terms of traffic flow which is also one of the main reasons behind the project.

Mr Herath noted that in terms of traffic flow, their main target is to mitigate the morning peak congestion going towards town, while they will also consider a contra-flow system – a temporary arrangement where traffic flows in the opposite direction to how it should normally flow and is most commonly used on motorways – to adjust to the afternoon peak hours.

He added that for now, the estimated cost for the first phase of the project which is being funded by the Seychelles government is around R7 million, but with the actual fluctuation, they will only come with a specific figure when the job is tendered.

Elected MNA for Pointe Larue Conrad Gabriel and proportional MNA Rosie Bistoquet who is also a resident of Pointe Larue both noted that the project is very vital for their district, especially regarding the issue of flooding which they both described as a nightmare, especially when it comes to people movement, including both school and work.

They both pointed out that other than affecting businesses which are along the coast, the flooding also brings health and sanitary issues as the sewage system also gets affected during those times.

They also pointed out the traffic issue which they said is another major constraint.

Both MNAs pledged their commitment to convince the landowners in seeing the positive side of the project, all in the spirit of consultation and right of expression.

As for the MNA for Cascade Philip Monthy, he said the new project will be useful in terms of movement for the inhabitants of Cascade who are most of the time caught by the traffic, preventing them from going to the eastern part of the island, or accessing the highway.

The accompanying photos show some highlights of Minister Derjacque’s visit. 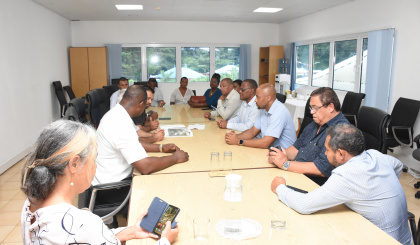 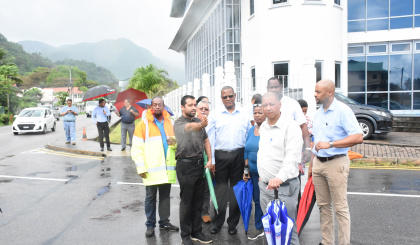