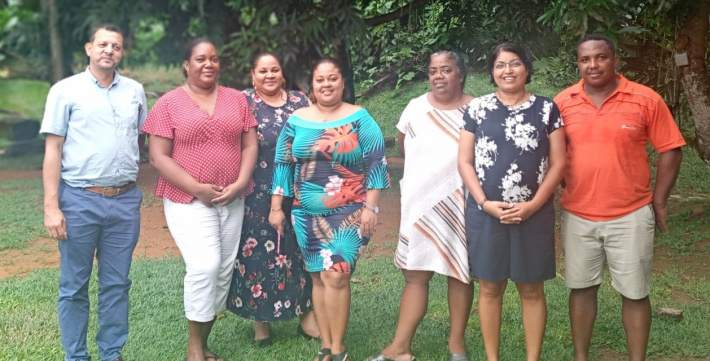 The Association of Media Practioners Seychelles (AMPS) elected its new executive committee last Saturday during its annual general meeting at the Exiles Club.

Rassin Vannier (Seychelles News Agency) was re-elected for a two-year mandate at the helm of the media association. Joanna Nicette (freelance) is the new vice-chairperson. She replaces Sharon Uranie.

This election is the fourth AMPS executive committee since its creation in 2014. During the past two years, AMPS organised and took part in various activities both locally and internationally and extended its networking to the region.

The association is also represented on four national boards namely: National Information Services Agency (NISA) – Marie-Anne Ernesta for a period of 5 years since December 21, 2017; Seychelles Broadcasting Corporation (SBC) – Mary-Annette Ernesta for a period of 5 years since April 2017; Seychelles Media Commission – (since December 21, 2017 for a period of 5yrs). Initially, AMPS was represented by Tessa Henderson, who had to be replaced in 2018, after she joined SMC as a full-time staff. She was replaced by Sharon Uranie, who still sits on the committee and Agency for the Prevention of Drug Abuse and Rehabilitation (Apdar) – Barbara Coopoosamy since September 2017.

During the past two years various activities have been organised such as debates by the National Assembly - 'Restricting freedom of mainstream media and social media through filtering measures. How acceptable is it and what impact will it have?'; trainings; social gatherings; regional HIV/Aids colloquium in Mauritius and Reunion; partnering with the American embassy to organise a three-day basic journalism writing skills training: 'Journalism 101- Back to Basics Training' - where eleven journalists from local media houses benefitted from the training, which was conducted by Franco-American digital media developer and trainer, Nicolas Pinault.

AMPS also commemorated its fifth year anniversary with a social event at Seychelles Breweries and four members from AMPS (Rassin, Patsy, Barbara and Rita) formed part of a ten-member delegation from Seychelles who travelled to India for a week-long familiarisation visit sponsored by the Indian high commission.

The trip to Bangalore and Delhi included talks/meetings with various government and private agencies as well as visits to historical sites.

AMPS also participated in the elections training in partnership with the US embassy for all media houses in the country. The lecturer was Linda Bryant.

AMPS joined the newly created Congress of African Journalists (CAJ), a grouping of journalists unions and associates in Africa, which will address issues affecting journalists and their organisations.

Following the first AGM, AMPS was asked to appoint a member of the Governing Council. The committee nominated freelance journalist, Patsy Athanase.

As part of its mandate, AMPS also represented its members and voiced its concerns on several issues which it felt were not in the best interest of the journalists and their work. For example when one of its members were ill-treated at the funeral of former President France Albert Rene; Talks with the Ministry of Health – Covid-19 press conferences; Electoral Commission on pertinent issues which were raised by the journalists; Condemned President Danny Faure’s March 2019 visit to Saudi Arabia – following the assassination of journalist Jamal Khashoggi at the Saudi consulate in Istanbul Turkey, in October 2018.