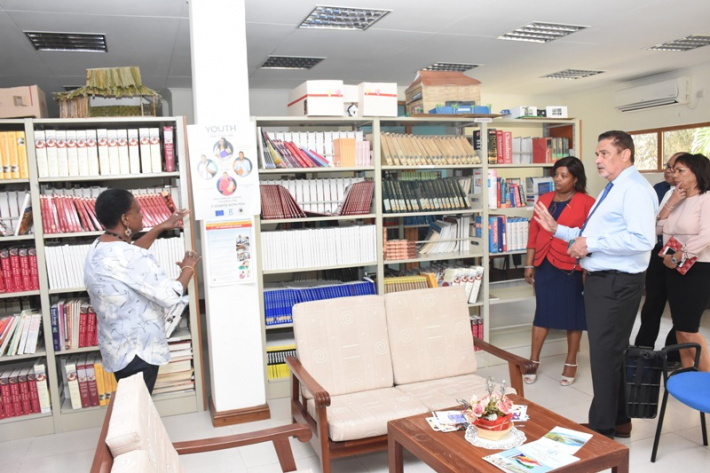 The minister started his visit at the laundry room of the school, followed by their test kitchen where he got a chance to see some students in action as they were in the middle of a practical exam in the restaurant.

He also visited the library, staffrooms and classes where he interacted with students on the SETS programme.

“Since I was appointed as minister I wanted to visit the institutions that fall under my ministry, and STA was one of my priorities. I wanted to see the setup of the school and the programmes on offer as it is very important that we get qualified and devoted workers which is the only way for the industry to succeed,” said the minister.

He noted that the academy has surpassed his expectations as he saw a very competent team and good facilities for students.

“Some of the weaknesses that I observed was out of date buildings but we will work towards giving the STA the facilities it needs to function on a higher level not only in terms of infrastructure but of teaching,” he said.

Minister Radegonde added that we need to sensitise the public about the tourism industry for them to understand its importance.

“We need to ensure that at a young age students are able to join tourism clubs to understand the role tourism plays in our economy as well as understand that STA should not be a last resort for them. A career in tourism should be considered on par with any other career,” the minister said.

As tourism is still in a downward spiral, the minister also addressed the possibility of STA students being unemployed once they graduate next year. He noted that the government is committed in its effort to reshape the economy starting with tourism.

“We are seeing positive signs in the increase of the number of tourists we are getting but we must also address the issues it comes with it such as its impact on airlines,” Minister Radegonde said.

He remarked that Emirates is the only airline that Seychelles is depending on and it is possible that if it cannot fill its seats it will stop flying to Seychelles.

The accompanying photos by our photographer Anel Robert show highlights of Minister Radegonde’s visit at the STA yesterday.