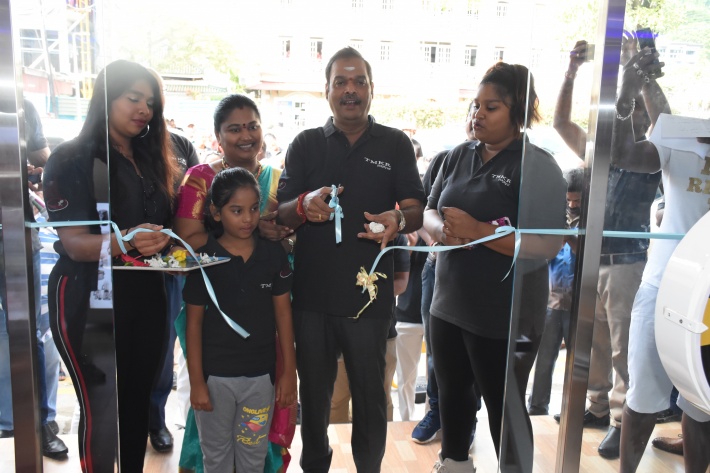 “We are back” (Nou’n retournen) were the words echoed by Ramu Pillay, owner or Pillay R Group, at the opening of his new outlet ‘TMKR’ on Market Street, yesterday morning.

The new home and electronic shop was officially opened by Mr Pillay in the presence of families, friends, staff and customers. It was part of celebrations to mark the over one hundred years since TMKR was opened as a provisional store. Mr Pillay had the honour to unveil the commemorative plaque and cut the ribbon to open the shop.

The outlet is the first of its kind for Pillay R Group which combines electronics and IT products under one roof. Some of the popular brands in electronic are Panasonic, Sharp, Samsung, LG, Hisense, Sony, Aftron, Hardee, Elekta, JBL, JVC among others and with Acer and Lenovo as IT brands. Such items include fridges, deep freezers, cookers, television sets, music appliances, travelling bags, rice cookers, kettles, air conditioners, mobile phones and laptops and accessories among others.

Mr Pillay said that he was happy to be contributing to the development of Market Street while at the same time preserving its cultural aspect.

“I could have invested somewhere else but I decided to invest in Market Street so as to bring its standard to a higher level, for the benefit of our customers,” Mr Pillay said noting that he wanted to honour the legacy of his family who had lived and been doing business in Seychelles to serve the Seychellois people for over one hundred years.

He said that as a small child he was raised and also worked in the shop in the early 1980s.

Mr Ramu said that TMKR in the old days was very well known for giving credit to almost 300 of its clients which was entered in the famous ‘Karnen’ (log book) imported from China. He noted that this gesture was a sign of trust between TMKR and its clients which worked very well. The types of items sold during that time were textiles (Latwal Endyen), blankets, sugar, milk, salt, lentils, onion, garlic, oil and rice including the famous basmati rice (diri Bengal) among other household items.

He said what is striking is the replacement of the old by the new, which comes just in time for the upcoming commemoration of the first settlement in Seychelles some 250 years ago which included people of Indian origins such as Chary, Moutou and Domainge.

Mr Pillay further said that the letters TMKR which stand for family names of forefathers, including his from the fourth generations, also represents trustworthiness (T), motivation (M), kindness (K) and reliability (R), all geared towards the kind of service customers can expect.

“The opening of TMKR shows that Seychelles is evolving to an even higher standard in terms of availability of products on the market and is comparable to other places in the world. You don’t have to travel to Dubai or elsewhere to buy any IT or electronic products as we have it here and at competitive prices,” Mr Pillay said, noting that the new version of TMKR will keep on valuing the trustworthy working relationship with clients, inherited from so many years ago.

Most of the customers who visited the outlet after the opening said it sure enhances the appearance of Market Street.

“It’s very nice and spacious and there are lots of interesting products. It’s very good for Market Street to have a shop like this,” said 67-year-old Simone Marie from Takamaka.

She further said she remembers how the place was before as she used to patrol the street as a police officer in the old days.

The TMKR provisional shop which stood in ‘Lari Bazar’ (Market Street) during and after the colonial era was said to be as old as the Clock Tower.

Several artists in the likes of Philip Toussaint, Sandra, Katty Melanie, Ruben, Jahkim, Extra Big, Mia and François Larue graced the opening of TMKR with performances at intervals from the morning until late in the evening.

The accompanying photographs show some highlights of the opening ceremony. 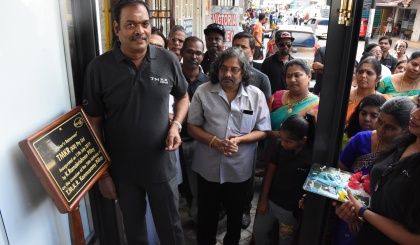 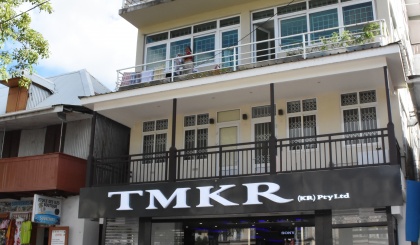 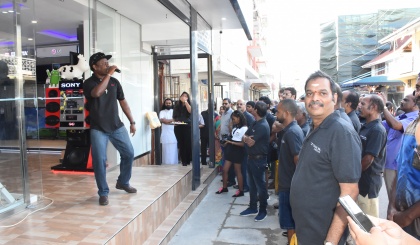 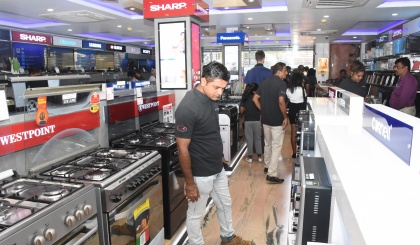