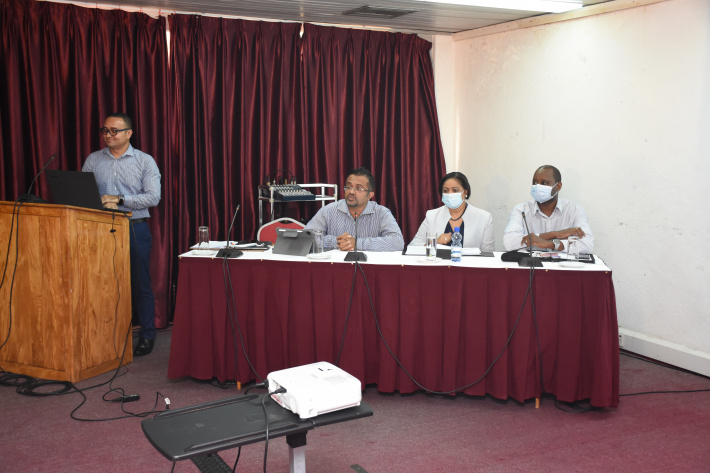 Stakeholders from the private sector yesterday had an opportunity to voice their concerns in relation to the Financial Assistance for Job Retention (FA4JR) financial scheme, which government intends to gradually phase down in 2021 due to budgetary constraints.

Minister for Finance, Economic Planning and Trade, Naadir Hassan, stated during the first consultation meet the total budget implications for the scheme for 2020, amounting to R1.27 billion, a figure which cannot be sustained through next year as the country faces its first serious recession in over a decade.

“As has been mentioned in the media in the past few weeks, our budgetary situation is not in good condition. If we consider the projections that we will end the year on, we will have a deficit of around R4 billion. And when you have a deficit of R4 billion, you need to borrow, and by borrowing you inject liquidity into the system which results in pressure on exchange rate,” the minister said.

“How does this impact on decisions relating to next year? Definitely, the government does not have financial resources to support FA4JR as it is presently. If we continue with it as it is, next year it will cost government R1.5 billion, so definitely, this is not a sum that government can afford within next year’s budget, given that revenue is still low, and if you intervene in this way, our budget will not be sustainable, our debt will not be sustainable and it will place more pressure on the exchange rate,” Minister Hassan explained.

As such, the ministry commenced work with relevant stakeholders from the Ministry of Employment and Social Affairs and the Central Bank of Seychelles (CBS) among others, to review the present FA4JR framework, weigh up the availability of resources and formulate a proposal for the restructuring of the scheme, which was laid out by secretary of state for finance Patrick Payet.

In order to phase down the scheme, an Affirmative list is being proposed detailing classes of applicants and sectors which qualify to be assisted in 2021. The proposed list is as follows;

Form 1 applicants of businesses on the affirmative list will receive 100 percent of the employee assistance for January to February 2021, and 75 percent assistance as of March onwards, on condition that the establishment should have received the new license as per public health requirement from March 1, 2020, no Seychellois employees should receive a reduction in wages even if the establishments are receiving only 75% salary assistance, and any redundancy that will be done should be for non-Seychellois first.

Businesses not on the affirmative list will receive 75 percent of the assistance for the first two months, and no assistance as of March onwards. A reduction in the capping of R30,000 was also proposed.

As for Form 2 applicants who are benefitting from self-employed income assistance, businesses on the affirmative list will receive 100 percent in January to February and from March onwards will receive R5804 monthly. Individuals engaged in business activities not on the affirmative list will in January and February receive R5804, and no assistance as from March onwards.

“Based on the policy proposal, it will in January and February still cost us around R86 million for Form 1 applicants, as compared to R88 million which we are spending presently, which is staying more or less the same, because as I said, Form 1 are mainly in the tourism sector and they will remain on the affirmative list. This will be cut back in March and on average we will spend R655.3 million in 2021,” he said.

“Form 2, we are estimating around R24 million from R30 million (January and February) and as from March R6.9 million. And on average for Form 2 applicants for 2021, we will spend R117.5 million and the total budget for the FA4JR proposition is R772.8 million, as compared to if we continue with business as usual at R1.5 billion,” SS Payet said, noting that additional redundancies are expected next year.

On account of redundancies being foreseeable, efforts are being channeled towards ensuring synergy in government policies relating to employment and social affairs, such as welfare assistance and safety net policies. A phase out of the Seychelles Employment Transition Scheme (Sets) is also in the pipeline, SS Payet noted, and the department of employment will take over its functions for a more coordinated approach.

Stakeholders were particularly concerned with whether the local labour force can be as productive or skilled as expatriate workers in some sectors such as construction. There was also particular concern about the phasing out of Sets to be absorbed by the department of employment, who presently oversees a number of employment programmes aimed at different groups, including the My First Job Programme, the Internship programme and the Unemployment Relief Scheme (URS) which again, places burden on government to provide financial salary assistance for such groups.

Participants also had concerns about the availability of employment opportunities presently, especially as more graduates and youths will enter the labour market.

The FA4JR scheme was introduced in April to support businesses to maintain their workforce during the economic recession caused by the Covid-19 pandemic. Since its introduction, the highest number of applications were received in May, when the scheme still applied to non-Seychellois employees. In July, the scheme was revised to only apply to Seychellois employees and self-employed individuals.

On average, R125 million was forecasted monthly for the financial scheme, a figure which was exceeded from April to July but which has since gone down from August. The majority is disbursed to applicants qualifying under Form 1, for which R88.2 million is being disbursed as payroll support to 1,068 businesses, covering 8,610 Seychellois employees. As for Form 2 which applies to self-employed individuals, government is paying out R30 million as income assistance to 2,806 self-employed business owners.

As per records held by the Ministry of Finance, of the R88.2 million spent for Form 1 applicants, the majority, R42.3 million, is disbursed to accommodation and food service related activities, hotels, guest houses and restaurants, representing 47 percent of the total amount. Business providing administrative and other support services to the tourism industry, namely, tour guides, tour operators, airlines and care hires also cash in a significant proportion of the assistance, at R14.5 million, representing 16.5 percent of the total amount.

Similarly, the majority of spending in relation to Form 2 applicants are linked to the tourism industry. Individuals engaged in transportation services such as taxis and omnibus operators make up 17.2 percent, R5.2 million of the total R30 million, followed by the wholesale and retail trade which has been assisted with R4.05 million. 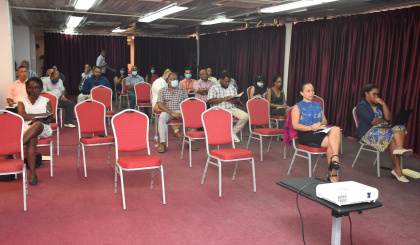