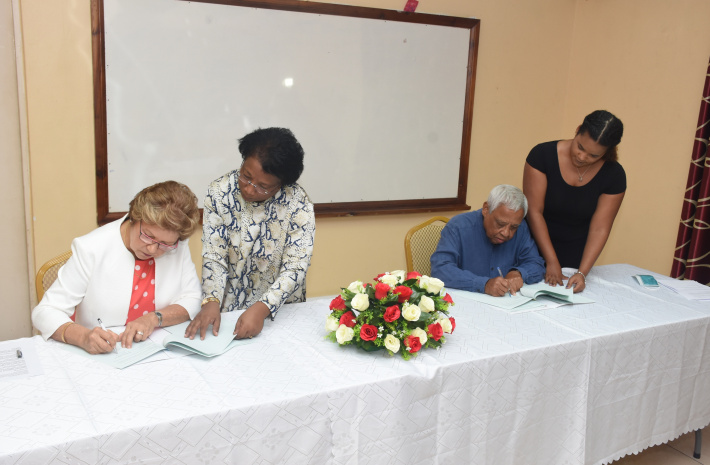 The Independent School, a private institution, has been given the green light to build new sports facilities – namely a swimming pool and an indoor gymnasium – on state land next to its Ile du Port campus.

After a year-long negotiating process, a memorandum of understanding formalising this outcome was signed on Tuesday by the Ministry of Local Government & Community Affairs and the Independent School.

As part of this agreement, pupils from Perseverance primary school will be allowed to make use of these facilities.

It was the Minister for Local Government & Community Affairs, Rose-Marie Hoareau, and the director of the Independent School, Zotique Pragassen, who signed the MoU in a ceremony at Oceangate House.

Although the project will be fully funded by Independent School, an agreement was reached so that students of Perseverance primary school may also benefit from the new facilities.

Mr Pragassen noted that with access to the facility comes responsibility in terms of respect with which it is used, reminding the public that the Independent School has the right to refuse access to those misusing the facilities.

Other aspects of the project the school hopes to work on includes the building of a parking for accessibility and some new classes to cater for the demand for space the Independent School is facing.

Mr Pragassen thanked the minister and her staff for bringing this longstanding negotiation to a close and thanked the previous government for the work done on this project.

“I hope that through the signing of the MoU, a collaborative partnership can evolve for the benefit of all the parties involved. I thank you minister for bringing us closer to having these facilities,” he said.

Speaking to the press, Minister Hoareau expressed her optimistic views on the collaboration between private and public organisations and explained briefly the main conditions of the agreement.

“I sincerely believe that the collaboration between private and public entities should be encouraged because it shows that there is a correlation among us. Both sides have what is best for the nation at heart.”

“It is safe to say that if we want this partnership to work, everyone needs to take their responsibilities, the facilities should be used with respect to ensure they are well-kept and available for a long period of time. It is unfortunate to see so many private businesses investing in the community for the benefit of children, but these equipment are vandalised by adults,” noted the minister.

Minister Hoareau, on behalf of the government of Seychelles, thanked the Independent School for coming up with this initiative, while expressing her gratitude to all those involved in making it happen.