This match saw three players sent off near the end of seven long minutes with Warren Mellie being red carded for violent conduct while St Louis’ substitute striker Hubert Jean was also harshly expulsed by referee Emile Fred to see his team down to nine after Urri Bibi was rightly given his marching orders in the 90th minute for dangerous play towards Malagasy Jean Tigana minutes after coming on.

St Louis made a bright start in this match which they were desperate to win to kickstart their season and they should have gone ahead in the 7th minute from Headley Havelock’s short corner to Gervais Waye-Hive whose pinpoint cross found Juninho Mathiot unmarked but the defender glanced his header narrowly wide.

St Louis’ Travis Jerome gave away a stupid free kick on the edge of the penalty area as he climbed all over Nigerian Kazeem Adeyeri’s back but the former St Louis striker’s low free kick was pushed into corner by Malagasy goalkeeper Michel.

The same Jerome almost scored an own goal just past the half hour mark from Foresters’ goalkeeper Danny Larue’s long goal kick and the St Louis right back headed the ball back to his goalkeeper who was coming out to collect the ball and fortunately the ball sailed agonisingly out of play.

St Louis were still the more offensive side and in the 40th minute, Waye-Hive’s corner was cleared as far as Roddy Melanie who left fly a cracking left footer which crashed against the post.

St Louis then gifted their opponents a goal on the stroke of half-time when Karl Hall played a misjudged back pass to defender Danny Madeleine who was dispossessed by Brandon Labrosse who bore forward and rifled a fierce low shot which was spilled by goalkeeper Michel and there was Kenner Nourrice on hand to punish him as he stabbed the ball into the net for a 1-0 lead at half-time.

St Louis continued to probe in the second period and in the 50th minute, Melanie played a delightful pass over the defence to Waye-Hive who was in a good scoring position but he miserably miscued his shot to fluff a gilt-edge opportunity.

St Louis pressed but it was Foresters who almost scored again in the 76th minute when substitute Jean-Yves Ernesta picked up a loose ball to find fellow substitute Leeroy Corallie whose stooping header was saved at the second attempt by goalkeeper Michel.

At the other end, St Louis went close in the 80th minute from substitute Hubert Jean’s floated corner which was met by another substitute Urri Bibi’s header but he guided it inches wide.

Controversy loomed in the 89th minute when Jean went down in the Foresters penalty area, after being challenged by Mellie, appealing for a penalty backed by his teammates and supporters but referee Fred turned down his request judging it to be simulation but he failed to book Jean.

Foresters then broke forward as Tigana darted into St Louis’ half and Urri Bibi chased him and brought him down with a dangerous foul and was rightly issued with a straight red card as his team were reduced to 10 men.

There were further problems for the officials to deal with in the 95th minute when Mellie and Jean clashed on the bye-line and the Foresters defender was penalised for a foul and then he made a menacing gesture towards the St Louis player.

The St Louis bench protested and referee Fred, who appeared not to have seen this incident, had to hold play while he consulted with his fourth official Egbert Havelock and then amazingly red carded Mellie. It was, in fact, the correct call for his violent conduct but the official wrongly sent off Jean also though he was the innocent party in this incident, a decision which did not go down well with the St Louis camp.

Therefore this fiercely contested match ended on a sour note as the St Louis supporters threw bottles on the pitch which is a major concern and shows the lack of proper checks and security at the gates which has been a problem for a long time but has not been addressed by the Seychelles Football Federation and the National Sports Council (NSC).

As for the two coaches they were unison that the officials got it wrong with his decisions though Foresters coach Harold Hoareau was just pleased his team had won this tough match.

“We had expected it to be a difficult match as our opponents are very experienced, but we defended well and could even have scored more goals and punish our opponents. But the important thing was to win and I’m happy we managed to collect all three points,” Foresters coach Hoareau told Sports NATION.

As for St Louis coach Michel Renaud, he was adamant his team should have won this match where they were better than their rivals.

“We started well and had a good first half where we should have scored to put pressure on our opponents but we then gifted them a goal and this made our life difficult as we had to chase this match in the second period,” reflected the St Louis trainer whose team are yet to win a match this season after two draws and a loss.

After a goalless first half, Malagasy Charles Rakoto opened the scoring for the President’s Cup winners to make it 1-0 and Dave Brioche made it 2-0 minutes later.

Fabio Lemiel cut the deficit for the players of coach Ted Esther scoring from a direct corner to reduce the score at 1-2, but Rakoto bagged his brace for a final 3-1 scoreline.

Red Star Defence Forces had to come from 1-2 down to see off the challenge of St John Bosco in an interesting 3-2 victory at Stad Linite on Saturday afternoon.

Red Star Defence Forces broke the deadlock in the 14th minute from the penalty spot after Laurent Hoareau scythed down their former player Graham Cafrine on his debut for the army team.

Malagasy Jocelyn Fenosoa stepped up to drill the ball straight in the middle past St John Bosco goalkeeper and captain Duane Romain who got a foot to the ball but could not stop it hitting the net for a 1-0 lead as the Malagasy striker got his fourth goal this season.

St John Bosco though levelled the score in the 33rd minute when Red Star Defence Forces failed to clear properly Kelvin Cupidon’s free kick which dropped to Malagasy Jules Rapiera in the penalty area and his sweetly struck left foot volley flew in the net for a 1-1 score.

Four minutes later, the players of coach Gavin Jeanne got caught out at the back as their defenders had gone forward for a corner and Cupidon cleared the ball way forward to Thierry Camille who outsped the defenders to shoot the ball past goalkeeper Raphael Moustache to make it 2-1 at half-time.

Red Star Defence Forces showed more purpose in the second period but were lucky to survive in the 70th minute as substitute Aubrey Farabeau lost the ball to Randolph Elizabeth who played a glorious through ball to Camille who was clean through but goalkeeper Moustache did well to race out to thwart the danger.

The army team drew level somewhat fortuitously in the 77th minute as Jocelyn sneaked in behind the St John Bosco defence to pounce on a hanging ball which had ricocheted off a defender and he headed past goalkeeper Romain for a 2-2 scoreline.

Red Star Defence Forces regained the lead in the 87th minute from a stunning strike by substitute Ernesto Doway. After being teed up by Jocelyn, Doway rifled a superb shot which had goal written all over it and the ball flew past goalkeeper Romain for a 3-2 score.

A minute later, St John Bosco almost equalised as Dean Balette exchanged passes with Camille before firing at goal but goalkeeper Moustache was at full stretch to push the ball into corner to secure his team’s first victory of the season.

St John Bosco coach Vivian Bothe felt his team grew tired and had a lapse of concentration which cost them at least a point in this match where they had matched their opponents but conceded two late goals to bring them back to earth after their shock win over St Michel the previous Friday.

La Passe maintained their solid start to the 2020-2021 season with a convincing 3-1 victory over Revengers on Saturday afternoon at Stad Amitié in the Inner Islands Premier League.

Don Fanchette gave La Passe the lead with a strike from a free kick in the first half for a 1-0 lead at the interval.

Malagasy Florent added a second and his countryman Marthelin scored against his former team for a 3-0 advantage before Leroy Jupiter reduced the deficit for a final 3-1 result. 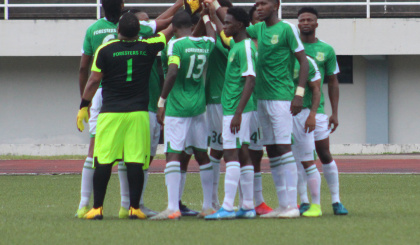