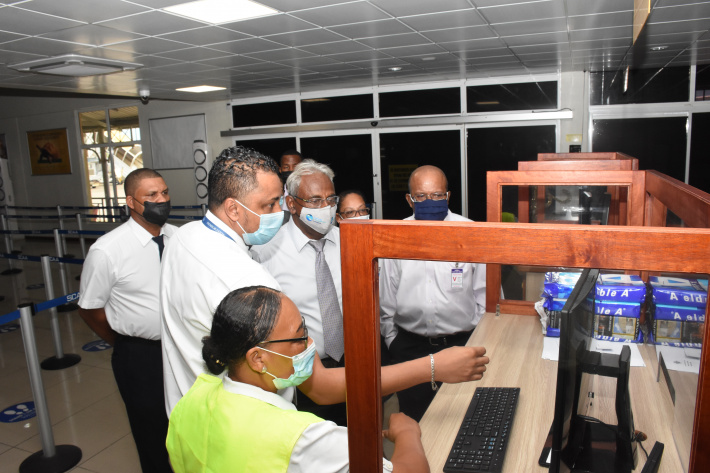 The Minister for Internal Affairs, Errol Fonseka, yesterday conducted his second visit at the Immigration section at the Seychelles International Airport, to meet, interact and discuss with staff on their working conditions and other pertinent issues.

Minister Fonseka, who was accompanied on the visit by the principal secretary for Immigration and Civil Status, Alain Volcère, chief of Immigration, Michel Elizabeth, and other senior officers, was firstly given a tour of the workplace of the immigration officers in the arrival lounge, including in their office, by the officer in charge of the airport immigration service, Francis Vadivello.

During the visit, Minister Fonseka also witnessed a demonstration on the use of Travizory, an advance passenger information system for border security, being used by the health and customs officers. It was in connection with that system that the immigration officers had, during their discussion with the minister, conveyed their wish to fast track their immigration procedures with passengers coming in the country.

Also during the discussion, they called for the passport biometric system to be put in place to facilitate their work and as front line workers they are allocated with the Covid-19 allowance as promised.

In an interview with the press, Minister Fonseka said that a proper assessment is taking place for a more coordinated use of the advance passenger information and for the implementation of the passport biometric system among the stakeholders including for use by the immigration.

As for the Covid-19 allowance scheme, Minister Fonseka said that in view of the economic situation, the matter is in the hands of the Ministry of Finance in collaboration with other ministries, like health, for consideration.

“By all means they quite rightly put their case forward which we will listen to but I will not make a commitment today,” Minister Fonseka said.

Minister Fonseka also called on the immigration workers that while being always welcoming to visitors, they should also always remember to stay vigilant to prevent the entering of those who are not supposed to enter the country.

Mr Vadivello said that apart from the staff who have had the chance to meet and voice their concerns to the minister for the first time, the visit also had given them the opportunity to reiterate their concerns from his last visit with regard to upgrading the IT systems for occurrence of incoming and departing passengers, the Covid-19 allowance and transportation which is also an issue as a result of unpredictable work schedules.

“There is the new system Travizory that is a must for us immigration officers at the airport to have to ease our work,” Mr Vadivello said.

The immigration section at the airport has 50 staff working three-hour shifts.

The accompanying photos show Minister Fonseka and his delegation during the visit at the airport yesterday. 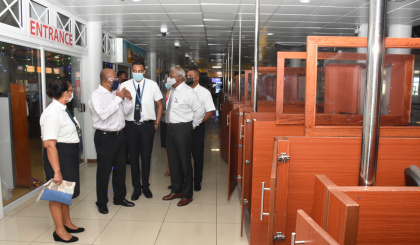