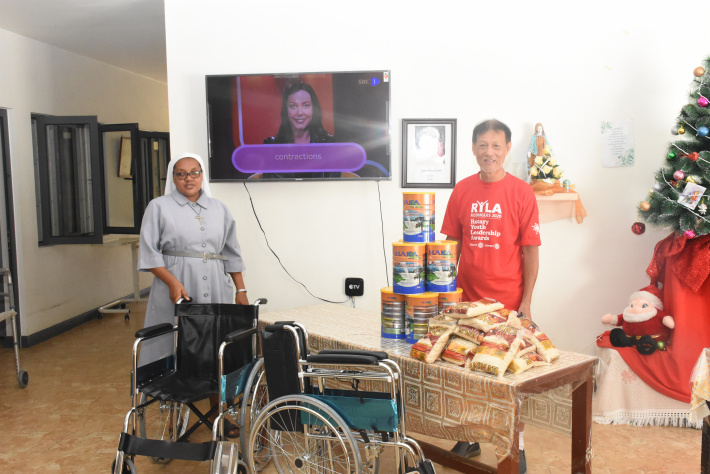 Traditionally, almost every December, the Rotary Club of Victoria (RCV) embarks on a series of activities helping the less fortunate in society through donations, special events, among other means.

As per yearly tradition, the elderly residents of Foyer Maurice Roh and the orphans of Foyer de la Providence and Foyer de Nazareth had the opportunity to be equally treated to some wonderful gifts. They were gifted two brand new wheelchairs and large packets of rice and milk by the president of RCV Charlie Ng.

The handover of the donations took place yesterday morning in a small ceremony at the Foyer Maurice Roh based at the St Elizabeth’s Convent in the presence of the staff and residents, including other members of RCV.

The sister in charge of the foyer, Marie Tahitienne, accepted the donations on behalf of the residents.

She expressed her utmost gratitude to Mr Ng and the sponsors who have allowed all of this to happen.

She stated that the seventeen residents of Foyer Maurice Roh will make good use of the gifts.

She noted that she was very grateful for the wheel chairs, since some of the residents themselves are too weak to walk on their own.

“So the wheelchairs are most welcome as they will replace the older models,” Sister Tahitienne said.

Sister Tahitienne presented a photo of the residents to Mr Ng as a sign of appreciation to RCV’s generous donation.

Apart from the donation to the residents at Foyer Maurice Roh, RCV also treated two groups of ten lucky children to a picnic on Moyenne Island (see story on page 1).

The two events would not have been possible without the sponsorships of Uniset Store, Teddy’s Glass Bottom Boat, Rotarian Nandu from Sahajanand builders and Charlie Ng.

Mr Ng said that RCV will continue to provide its aid to the less fortunate in the country.