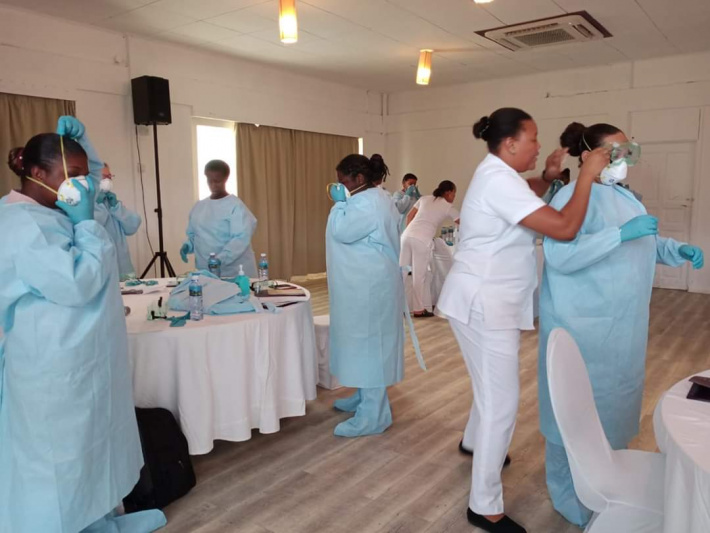 Facing the massive thunderclap that shook the nation

Covid-19 struck the Ministry of Health and the country like a thunderbolt on March 14 this year. Two Seychellois patients flying-in from Italy, three days earlier, tested PCR positive on that grim day. The whole country went berserk in a split second and nothing was ever the same thereafter.

“Every professional directly involved with the nation’s emergency preparedness and response remembers exactly at what time the fateful news struck and what he or she was doing at the strike of that nasty thunderclap,” recalls a leading member of the public health emergency operation committee.

Changes at the top

Less than two months earlier, at the end of January 2020, the ubiquitous Minister Jean Paul Adam had resigned as minister for health and President Danny Faure had assumed the role of health minister. With the President at the helm of the department and an overwhelming pandemic looming, all health workers were continuously on edge or on tenterhooks.

In October, President Danny Faure ceded the realm of the Ministry to Minister Peggy Vidot after the new government led by President Wavel Ramkalawan took over. To sum it all, 2020 was an aberrant year for the Ministry of Health ‒ not only because of the Covid-19 pandemic but also because the ministry changed ministers three times in barely 10 months.

Nurses and midwives hold the year

Slated to be the international year of the nurse and the midwife by the World Health Organisation and its partners, 2020 became a much different international year for the nurses and midwives than was envisaged. However, nurses did indeed propel themselves to the centre of health care. At Seychelles Hospital and the health centres, they vigorously led infection prevention and control and led the triage points before quickly finding a new leadership role at the quarantine facilities. A large group of fifty additional nurse-colleagues came in from neighbouring Kenya in May to join the fray. The initial passive resistance characteristic of the Seychellois, when something new occurs, eventually gave way to active acceptance.

Breaking the chain of transmission

At the height of the pandemic, huge tents sprung up like mushrooms for screening at the health facilities. The “revolver-like” infrared thermometers began to appear in the hands of every Tom, Dick and Harry who stood at any entry point.

How can one blame them, though? Every Tom, Dick and Harry was utterly concerned about the pandemic and doing his or her level best to keep the nation safe.

“Never, in my life would I have imagined that one day I would see a security guard taking the temperature of a doctor and telling him its normal, before allowing him or her into a bank!” commented someone on social media.

Masks appeared on people’s faces in a frenzy early on. Then, they came off completely because public health experts, following international guidance, deemed the masks useless to prevent Covid infection. Later, the masks came on again, that time by law; because new evidence was then showing that the masks were, indeed, useful to break the chain of transmission… Reverse education and sensitisation began in earnest.

Meanwhile, hand-sanitisers at entry points to every indoor facility slowly dropped from a copious volume that really soaked hands to just a drop that did nothing for infection control but a lot for the “feel good factor” and morale of the facility in question.

Massive public assembly in public or in private remained a total no-no for much of the year.

Relaying news to the public

Every day for several months, everybody was glued to their television screens as Dr Jude Gedeon, Public Health Commissioner and Dr Danny Louange, CEO of the Health Care Agency, reported fiduciarily on the triumphs and the tribulations of the nation vis-à-vis its fiercest health challenge ever.

Social media was rife with all manner of experts who knew more than anyone else on every matter.

By the 11th positive case and with the fear of community transmission looming, Seychelles unwillingly went into over a month of restricted movements.

To lock down or not to?

A fierce debate as to whether the country should or should not go into lock down broke up in April and involved all manner of self-professed experts. Each had his or her own opinion but most were pushing for a total lockdown. The table turned when the nation declared a public health emergency and movement was finally restricted in April, among several other legally binding measures.

“Suddenly, everybody wanted to be classified as an emergency or essential worker, just to be able to move around,” recalls an employee of the department of disaster preparedness and response.

Were it not for DRDM (department of risk and disaster management), the Ministry of Health would have had a much harder time putting the different pieces of the national Covid-19 response plan together.

“DRDM has been a real gem alongside the ministry and for the country,” says the principal secretary for health, Dr Bernard Valentin.

“They helped with every part of the effort to keep the nation safe and organised.”

There was a lull of over two months from April to June without any sniff of the Covi-19 in the country.

There was excitement as many touted the new normal where everything would be different but possible. The department of tourism envisioned a new industry where tourists could come to enjoy Seychelles because we would be Covid-free. We really began to believe in our invincibility.

The greatest shock of the nation came in July when 20, then over 100 other seafarers from West Africa pulled the rug from under our feet, and with their positive PCR tests, shook us to the reality of our precarious situation. Despite our best efforts, as a country we could not remain Covid-free.

“As long as Covid exists in the world and our borders are open, we can never consider ourselves Covid-free,” remarked another self-professed expert on social media.

The mother of all pandemics, as is now the nickname of Covid-19, pushed aside at least one other pandemic and a few other smaller epidemics the country was already dealing with. The measles vaccination campaign, for instance, was in full swing on the grim day of reckoning. It suffered a major setback and it had to stop abruptly before resuming much later. The three-year on-going dengue epidemic retreated to the back burner and so was the management of HIV pandemic. On World Aids Day this year, staff working in the area of HIV reported that testing for HIV, uptake of condom and new patients on antiretroviral treatment dropped significantly during 2020.

This is just the tip of the iceberg. The pandemic marked and marred everything on its path. For several weeks, the specialist outpatient department (SOPD) did not do its normal clinics and patients suffered from the pullback. Patients could not leave for their treatment overseas when airports closed everywhere. Others could not return home after their treatment and consequently remained overseas for weeks on end. Some had their elective operations postponed here. Others still had to receive their chronic medication in dribs and drabs for a while because of delays in arrival of medications from overseas due to lock downs in several countries.

The greatest damage to our common national psyche came from a Dutch couple who had tested positive for Covid-19. They received treatment for over two months with the best of care Seychelles could offer but ended up very disgruntled and ungrateful for the care they received ‒ care that even prevented one of them from dying. Seychelles was outraged. The nation supported the health professionals and ferociously attacked the lack of gratitude of the visitors.

Solidarity, change of course and return to the cradle

Meanwhile, as the ultimate act of charity and solidarity, more than R60 million worth of donations fell into the support basket to save the nation. All manner of national and international partners chipped in to help the country, as lives and livelihoods were threatened.

In December, the new government considered some of expenses too high to sustain. The renting of tents from third parties stopped. The payment to Berjaya Beau Vallon Bay Hotel as a quarantine facility stopped when a free quarantine facility came on offer. The policy to rent Arc Royal at Anse Royale as the health centre when a state-owned hospital stood idle just a few hundred metres gave way to a new policy of returning health services at Anse Royale back to its own cradle. The public felt good that the state would no longer be spending as much of its funds.

With many borders closed and most airplanes grounded, "Zoom" became the Ministry of Health’s only window to international dialogue. Every international organisation who wanted to be relevant had to organise a Zoom meeting of its own. There was one such meeting every day. Sometimes there were three in a day with not enough staff to spare to attend them meaningfully, while also fighting the pandemic. Rumours have it that Zoom will continue to rule international meeting scenery even after the pandemic is over.

When the country reckons with all the facts, it is clear that 2020 tested the capacity of the Ministry of Health and its staff. It is no mean feat that Seychelles, with all sectors working as a team, was able, for the major part of 2020, to keep community transmission for Covid-19 away from our shores.

The task of opening up the country to start rebuilding the economy falls squarely on the shoulders of the public health and political leaders. Jointly, they continue to face the dilemma of either opening up the country more and facing the real risk of a disastrous spell of community transmission or keeping the lid on, as tight as can be, and facing the real risk of a total economic collapse. The balancing act is difficult but all conjurors are at work, all hands are on deck and Seychelles will rise again. 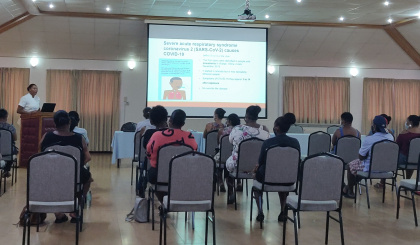 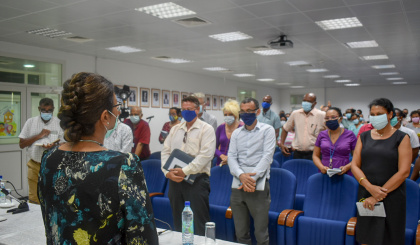 Peggy Vidot is welcomed as the new Health Minister 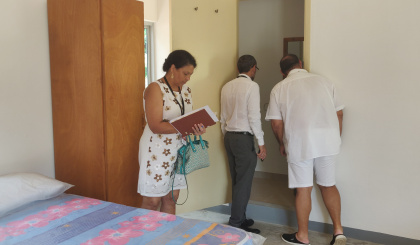 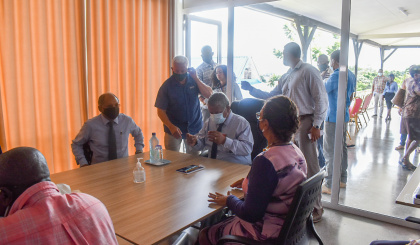