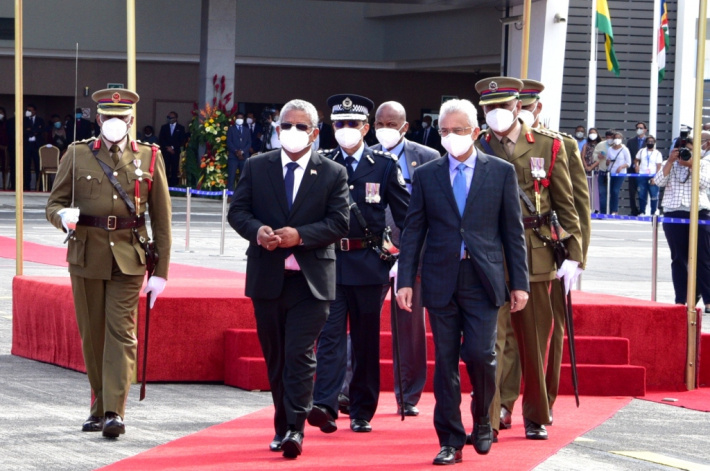 The need for national unity and the reinforcement of democracy

After being governed by one party for 43 years, Seychelles is finally being ruled by a new government under the leadership of ordained minister in the Anglican Church, Wavel John Charles Ramkalawan who won 35,562 valid votes (54.9%) during the Presidential election held from October 22-24, 2020.

President Ramkalawan took the oath of allegiance and presidential oath, before Acting Chief Justice of the Supreme Court, Justice Melchior Vidot, in the presence of the outgoing President and other distinguished guests on Monday October 26.

Addressing the people of Seychelles for the first time as President, Mr Ramkalawan called on all citizens of the country to remember that they are all Seychellois no matter which party they support and urged everyone to unite as a people to build a better future for Seychelles.

“For the five years that you have elected me in this office, I encourage every Seychellois to play their part in making a contribution for the further development of our nation. I believe no Seychellois should be left behind, so I call on everyone in whichever capacity that you are serving the country today, to remember you are not only working for yourself but also for your beloved country,” he added.

President Ramkalawan also underlined the need for national unity in Seychelles and to reinforce democracy.

He called on everyone to put aside any feelings of bitterness, vengeance and anger and also stressed on the need to create opportunities for every Seychellois and urged everyone to seize the opportunities, work hard and lend a hand in its development.

He equally thanked the outgoing President for his devotion, the love he has for his country and for working hard for the benefit of Seychelles and also for the good relations that exist between the two of them.

President Ramkalawan expressed the hope that the transition continues in peace between two leaders who respect each other and continues to set an example for all citizens in the communities.

President Wavel Ramkalawan’s first overseas assignment was a three-day state visit to Mauritius from November 29-December 2, where he was welcomed by Mauritian Prime Minister Pravind Jugnauth and the highest dignitaries of the host country.

During the visit, Seychelles and Mauritius signed two memoranda of understanding (MoU) in the fields of security and combating crime, as well as information and communication technology.

The first MoU was on security and crime combating between the two countries’ police force. It was signed by Minister for Foreign Affairs and Tourism Sylvestre Radegonde and the Commissioner of Police of Mauritius, Khemraj Servansin.The agreement will provide a broad framework and mechanisms for cooperation on matters of mutual interest in relation to security and combating crime.

The second MoU on information and communication technology was also signed by Minister Radegonde and the Mauritian Minister for Information Technology, Communication and Innovation Deepak Balgobin.

This agreement will allow for cooperation between the two countries through the sharing of information, capacity building as well as collaboration in cybercrimes among others.

During his visit in Mauritius, President Ramkalawan also visited the premises of the Indian Ocean Commission (IOC) in Ebène, where he shared his expectations with the various officials of the commission.

He said he is counting on better air connectivity between the islands of the Indian Ocean and expressed the wish to diversify the Seychelles economy which, until now, relies solely on the tourism sector.

A wish that has intensified since the Covid-19 pandemic and its economic consequences, and still according to President Ramkalawan, the confinement has shown the Seychellois people that they can no longer depend solely on the tourism sector.

Following his visit, President announced that the UAE will donate 50,000 doses of a Covid-19 vaccine to the Seychellois people,

This, President Ramkalawan said, will help us re-open our economy and will be good for our country.

“Seychelles will most probably be among one of the few island states to be vaccinating its citizens. This is really good news and we are now only awaiting for the green light from the Ministry of Health and if everything goes according to plan, Seychellois will be getting the vaccine early in January,” said the president.

In the same line, President Ramkalawan held a successful discussion with the president of Amsa Renal Care, Abdullah Ajmal.

Amsa Renal Care is based in the UAE with a branch in Seychelles through which the Ministry of Health outsources dialysis treatments, hence the meeting was an opportunity to discuss the existing contract.

President Ramkalawan successfully negotiated a reduction in the cost of treatment through the discussions from US $250 to US $175 per session per patient. This will result in savings of around R46 million for the year 2021 for the country.

“We talked about the re-negotiations of the contract between Seychelles and Amsa, and secondly ‒ which is good news for our country ‒ the current price of dialysis per session is US $250 and a patient needs three sessions each week, but we have been able to negotiate for the reduction in cost of the treatment down to US $175.

“This means an economy of R46 million in our country and this is what I want to put emphasis on. It was an important negotiation during my visit in Abu Dhabi. The president of Amsa will be travelling to Seychelles in January to look at the other aspects. The R46 million added to the R100 million we have already been able to save in the Ministry of Health means that we are on the right path,” said President Ramkalawan.

The President also announced there are no plans to close the embassy in the UAE given its strategic role in the relationship between Seychelles and the UAE and the wider region.

Locally, President Ramkalawan made two official visits to the inner islands, precisely La Digue and Praslin where he physically saw the different sites and also took decisions regarding different projects.

New measures taken and projects to be implemented

One of the bravest measures taken so far by President Ramkalawan was to suspend the 13th month salary for all employees in both the public and private sector, due to the current economic crisis.

The decision to suspend the 13th month pay was made following significant analysis of the country’s current and near-future economic outlook.

According to the President, economic experts are predicting the local economy will contract by 13.5% or more for 2020 compared to a contraction of 10.8%, forecasted earlier this year at the start of the pandemic.

Additionally the main pillar of the Seychelles economy, the tourism industry, is anticipating a reduction of 73% in visitor arrivals at the end of this year compared to 2019.

It is to be noted that, under the law, it is an offence for employers to not pay the 13th month salary which is why President Ramkalawan noted that the Attorney General was working on legislative amendments to deal with this issue.

“Given the economic situation with the continued devaluation of the rupee and reduction of dollars entering the government coffers, the government, which is already paying employees working in the private sector, finds itself in an impossible position to pay the 13th month salary,” said the president.

Cost cutting measures are also expected outside of the country with the announcements that Seychelles plans to close three of its embassies – in Sri Lanka, Cuba and Geneva (Switzerland). 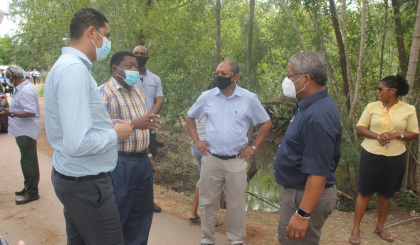 The presidential delegation during a visit to Praslin 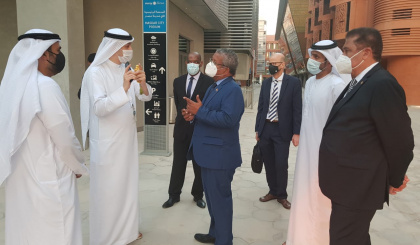