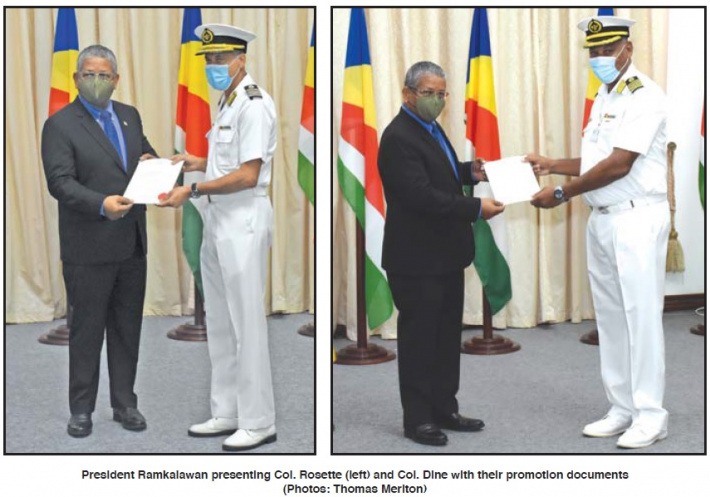 New Year’s Day was indeed a special one for the Seychelles People’s Defence Forces (SPDF) as President and Commander-in-Chief of the Armed Forces Wavel Ramkalawan officially appointed the forces’ new command, during a brief ceremony at State House.

President Ramkalawan, on behalf of the people of Seychelles, congratulated and thanked Colonel Roseline for his years of service and expressed his desires to continue collaborating with Colonel Roseline, even through his retirement.

He also congratulated Colonel Rosette and Colonel Dine for their new ranks within the forces.

“You have been tested in various ways and I have no doubt that you are competent to lead the force to another level. We are talking about professionalism so the force has a lot of young professionals on board and we have already started the work, so we will continue.”

“Colonel Dine, I wish to congratulate you too for the new responsibility. Together with Colonel Rosette, it is you who is at the Head of the military, so together with other officers who have a lot to offer, I hope that in your responsibility, you will be considerate of the welfare of our officers, so we have a force that continues to grow, and attract more youths to join us so they too can make concrete contribution, so I wish you all the best,” President Ramkalawan said, addressing the new commands.

Colonel Rosette, who was serving as Chief of Staff for the past two years, is confident that the armed forces are on the right track, although he acknowledged that yet more needs to be done to attract more youths to the force, and to better serve the people and the country.

“I think the defence forces are heading in a good direction but what is missing is in terms of human resources and resources. In the upcoming years, even though it won’t be easy, we need to look at how to reconsolidate and attract more youths so we can fulfil our role to defend our country,” he said.

“Presently, the focus is on protecting natural resources and exploiting these resources in a sustainable way. If we don’t have a force, especially Coastguards and Air Force to protect our resources, we will continue to face external threats and exploitation from foreign actors which results in the country losing out at the end of the day,” said Colonel Rosette.

He further added that he will seek to address the various challenges within the SPDF, placing emphasis specifically on better management of resources, training and development of officials and managing the force as per international best practices.

As is customary, former Chief Colonel Roseline, whose retirement took effect on December 31, was presented with the retirement plaque as a token of appreciation for his 42 years rendered in service.

“I have been marked by everything throughout my 42-year career, and I have appreciated it all. I wish the new command all the best and I am confident that they can do well to advance the forces forward. I have over the years experienced a lot of things and I am grateful that after having joined the army as a young lad, I am leaving today in good health,” said the former Chief of Defence Colonel Roseline.

The ceremony took place in the presence of First lady Linda Ramkalawan, Vice- President Ahmed Afif, members of the Defence Forces Council and other high-ranking officials. 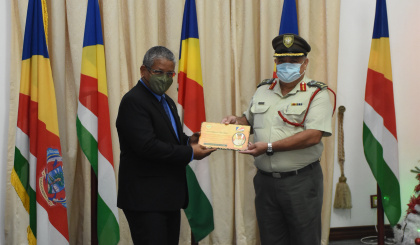 President Ramkalawan presents Col. Roseline with a retirement plaque as a token of appreciation for his 42 years of service (Photo: Thomas Meriton)