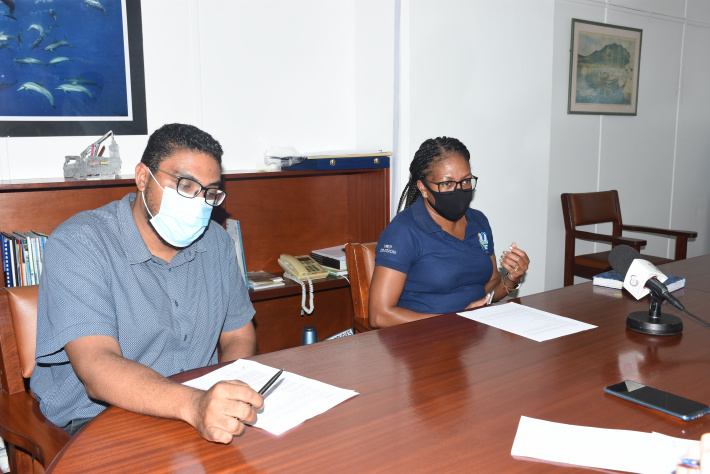 The scheme in regards to the levy on alcohol glass bottles that have been in the works for over two years is expected to be fully implemented by January 18 if everything goes according to plans, officials from the environment department have confirmed.

Also to be implemented this year is a ban on balloons which will take effect mid-year, with the first phase starting on April 1.

The director general for waste enforcement and permit, Nanette Laure, and director for waste management and standards, Fredrick Kinloch, yesterday further explained the two initiatives in a press conference.

Seychelles continues to add to its list of banned plastics, and reduce plastic waste, by prohibiting the importation of balloons from April 1, 2021. However the full ban will only be effective as from June 1, 2021 when the use, sale and manufacturing of balloons will also be banned.

In September 2016, the cabinet of ministers approved a ban on the importation of Styrofoam takeaway boxes, and plastic items such as carrier bags, plates, cups and cutlery which was enforced in 2017. In the same speed, a ban on single-use plastic straws came into effect in 2019.

The ban on balloons follows a recent announcement by President Wavel Ramkalawan to disallow the importation and use of the multi-coloured party favourites in Seychelles, much to the delight of environmental activists and the chagrin of consumers.

“One of the main issues we were faced with was balloons that were being used on the beach and which were negatively impacting on our ecosystem. Environmental clean-up initiatives have shown that this was becoming a problem but it is not just a beach-related problem – balloons are not good for our entire environment,” explained Ms Laure.

“Ban on balloons is not something we have just thought of; it is an issue that has been discussed over time but following the president’s announcement we made it a matter of priority,” explained Ms Laure.

Ms Laure explained that the Ministry of Agriculture, Climate Change and Environment are working on the necessary legislation which will also address the fines for those who contravene the ban.

The ban is imposed on plastic balloons used for decorations, foil balloons such as those people bring to hospitals as gifts, any balloons in toy products, and even biodegradable or environment-friendly ones.

It however excludes the weather balloons used by meteorologists.

Event organisers and decorators as well as individuals will simply have to find creative alternatives to balloons, Ms Laure added.

She noted that the proposed dates for implementation of the ban were discussed with the environment department’s partners and stakeholders.

“Also, Seychelles is a member state of the World Trade Organisation (WTO) and notice of this ban should be placed on WTO’s portal for a specified amount of time, three months. This is why April 1 was deemed the most appropriate date for the importation ban,” said Ms Laure.

In regards to the redeem scheme in line with the levy of R2 imposed on imported alcohol bottles, Ms Laure and Mr Kinloch explained that the ministry is hoping to implement the full scheme by January 18.

“Since 2018 there has been a levy of R2 on alcohol glass bottles entering the country. The government has encountered some delays in the implementation of the full scheme[…],” noted Ms Laure.

As from January 18, depending on the Covid-19 situation, people will be able to bring the alcohol glass bottles to the six designated redeem centres in exchange for R1 per bottle. The bottles must be intact.

Glass bottles that can be brought to these redeem centres include imported beer bottles and liquor, spirits and wine bottles of any size.

However members of the public will have to seek an appointment before bringing the bottles to the redeem centres.

“It is to be noted that the scheme does not take into account glass bottles from Seychelles Breweries or Takamaka Bay, since these companies already have their own recycle systems in place,” provided Mr Kinloch.

“The R2 levy aims to support this new redeem scheme; the consumer gets R1 while the redeem centre and the recycling facility which crushes these bottles also get a portion of the R2 levy. It works in a similar way as the redeem schemes for PETs and cans,” he added.

The end product of crushed glass bottles – which is like fine sand – have multiple use such as in construction, for laying asphalt on the road and even to cover the landfill.

The levy and accompanying scheme were introduced to discourage people from throwing these imported bottles anywhere and everywhere in the environment after use.