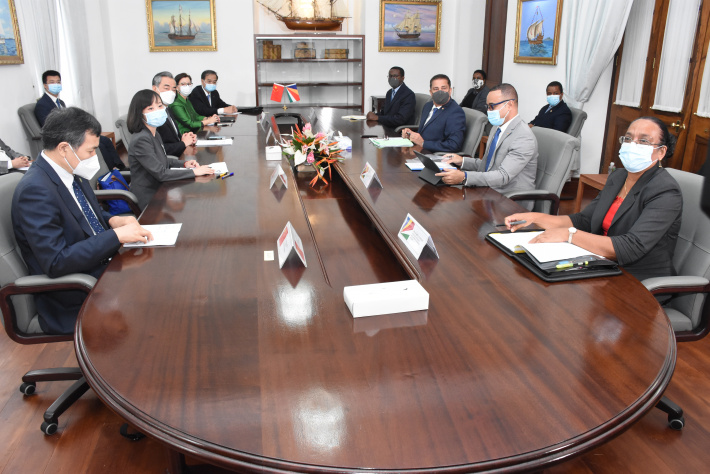 The meeting between the two delegations (Photo: Jude Morel)

China and Seychelles has signed a memorandum of understanding (MoU) which includes a grant of $4.6 million to help with various projects aimed at generating more renewable energy.

The signing of the MoU coincided with the visit to Seychelles of Chinese Foreign Minister and State Councillor Wang Yi.

The document was signed at State House by Chinese ambassador to Seychelles Guo Wei and the Minister for Agriculture, Climate Change & Environment Flavien Joubert.

“During the discussion with Minister Wang we talked about the mutual engagements that China and Seychelles have as we are oriented on similar national issues such as climate change and sustainable development and they have expressed their desire to work closely with Seychelles not only on a national level but also through corporations in the country,” said Minister Joubert.

He added that the MoU signed will help us develop the low carbon project which will help generate renewable energy and help in transportation issues.

“China has shown great interest in a greener future, they are focusing more on environment when it comes to developments. It is the same for Seychelles as we cannot go for rapid development as it will bring destruction to the environment,” said Minister Joubert.

He noted that China has re-affirmed its commitment to the Paris Climate Agreement and has assured that they will not be backing out of the deal.

“Their ambition is to become carbon neutral and this is some of the engagements that they are giving in order to stabilise climate around the world. As a superpower China has a duty to help encourage more countries to tackle climate change,” said the minister.

Minister Joubert noted that the project will have many components such as making Curieuse Island autonomous in terms of energy.

Another component of the project is to install solar panels on public buildings such as state schools, which will reduce their energy consumption.

“We are pushing the renewable energy agenda and looking for more partners as there are many benefits in renewable energy but also in terms of money that will benefit the country greatly,” said Minister Joubert. 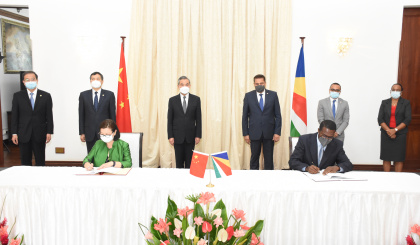 The signing of the MoU (Photo: Jude Morel)