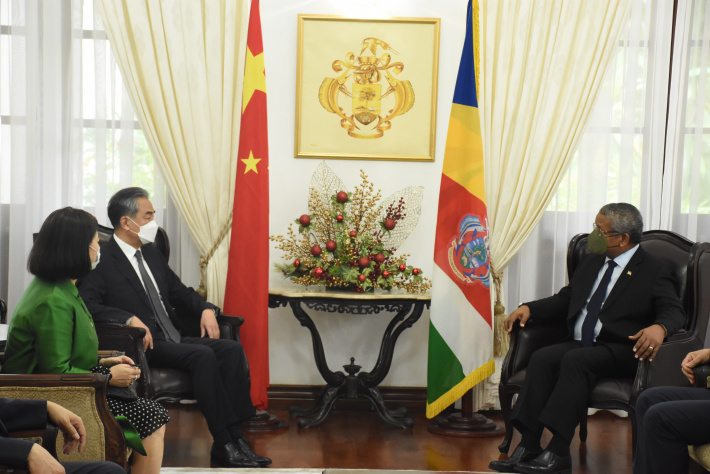 China will be financing a RMB 40 million ($11 million) fund under the Economic Cooperation Agreement (ECA) for mutually agreed upon projects in Seychelles.

Of that money $4.6 million will go towards renewable energy projects.

China has also given $155,000 in grant money to the department of foreign affairs.

All this came to light after a meeting between the State Councillor and Minister for Foreign Affairs of the People’s Republic of China, Wang Yi, and President Wavel Ramkalawan on Saturday at State House.

Minister Wang was in Seychelles on the last leg of his visit, a 30-year tradition where China's foreign ministers make Africa their first visit for the New Year.

The visit was organised a couple of weeks before the Covid-19 outbreak in the country and its aim was to discuss the bilateral relationship between the two countries as well as ongoing projects and new projects being proposed.

During the meeting at State House President Ramkalawan reconfirmed the support of Seychelles towards the One China Policy.

He underlined the excellent relations that exist between Seychelles and China where he described it as “exemplary” and how the Seychellois people are counting on China’s continued support through a win/win partnership.

Also present at the meeting was the Minister for Tourism and Foreign Affairs, Sylvestre Radegonde and the Chinese ambassador to Seychelles Guo Wei.

“During the discussion we have expressed the gratitude of the government of Seychelles for the continued support of China to Seychelles over the years for diverse projects towards the country’s socio-economic development,” said Minister Radegonde after the meeting.

The discussion on Saturday also revolved around how Seychelles and China can strengthen bilateral relations and improve friendship and cooperation in prioritised fields such as the blue economy, tourism, environment, fisheries and renewable energy.

He said President Ramkalawan also thanked Mr Wang for the annually awarded scholarships from the Chinese government for Seychellois to further their studies in China.

“The support that China is giving us will not only continue but will be reinforced,” said Minister Radegonde, who said that he is grateful for the $155,000 grant money that China has given to the department of foreign affairs.

With regard to talks about tourism Mr Radegonde noted that they discussed the possibility of a connecting flight direct from China.

“Our neighbours, the Maldives, receives around 300,000 Chinese every year. The only advantage is that Maldives has a direct flight with China,” the minister noted.

Minister Radegonde said if we got even a fraction of that number we will benefit greatly from it.

He noted that the connecting flight will also diversify our market as we cannot always depend on Europe.

Others present at the meeting were the Minister for Agriculture, Climate Change and Environment, Flavien Joubert; secretary of state for Finance, Patrick Payet; the principal secretary for Foreign Affairs, Dr Marina Confait; project coordinator, International Cooperation and Regional Integration Division, Terrence Malbrook and the director for World Affairs and Countries, Patsy Moustache. 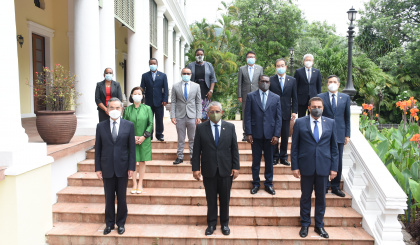 The two delegations in a souvenir photograph at State House (Photo: Jude Morel) 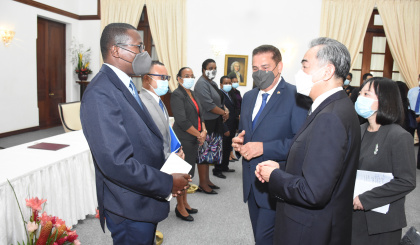