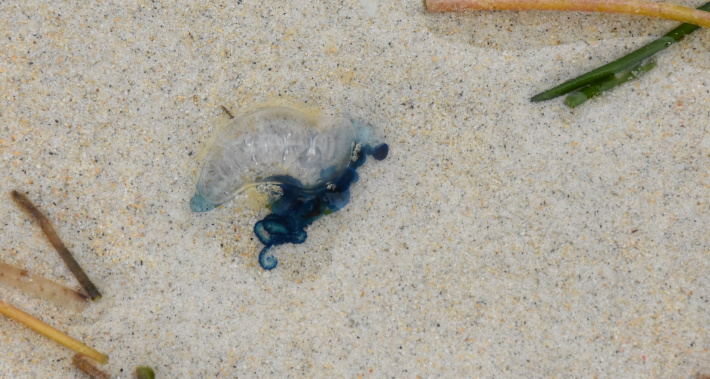 Beach-goers at the Beau Vallon beach yesterday reported several sightings of the rare venomous blue dragon sea slug on the shoreline, which have been confirmed by the Ministry of Agriculture, Climate Change and Environment.

However by the time Seychelles NATION team reached Beau Vallon, around 11am, it could only spot some blue remnants of the sea slugs and tendrils of the man o’war jellyfish that the sea slugs had fed on.

The assistance of the Land Waste Management Agency (LWMA) had been sought earlier during the day to clean the beach so as to prevent any casualties from the washed up creatures.

An advisory from the Ministry of Agriculture, Climate Change and Environment has warned people against getting too close and touching the blue dragon sea slug since it carries a painful sting.

The sting can cause symptoms such as nausea, pain, vomiting and acute allergic contact dermatitis. Researchers from other countries have also stated that aside from causing a very painful sting, this gastropod could potentially kill a person, especially those who experience severe allergic reaction to it.

Even if 3 cm long, blue dragons are expert hunters. Its preferred prey is the blue bottle jellyfish (man o’ war) also observed on the beach yesterday.

According to the director of biodiversity and conservation, Ashley Dias, the environment department is conducting further research on the blue dragon sea slug and the circumstances behind its appearances on the Beau Vallon coastline.

“The blue dragon is a rare species to find in shallow waters because it is more of an open ocean creature. It is a predatory species which releases toxins it gets from feeding off the man o’war jelly fish,” explained Ms Dias.

She noted that the blue dragon sea slug is found in the Indian Ocean but the occurrences where it has washed up on shore have been quite rare.

In relation to Seychelles in particular, Ms Dias said that it would not seem that this phenomenon has occurred prior to yesterday but also added that this can only be confirmed by environment experts later in the coming week.

The environment department has reported this event to the Seychelles Fisheries Authority (SFA) so as to ensure that fishermen are cautious of the danger of the blue dragon.

Members of the public are advised to get in touch with the ministry to report other sightings and to immediately seek medical attention if stung by the species. The ministry will continue to monitor this situation and will keep the public informed. 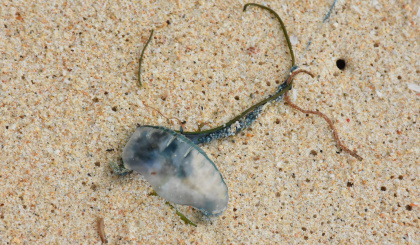 Remnants of the sea slugs with tendrils of the man o’war jellyfish they had been feeding on (Photos: Joena Meme)