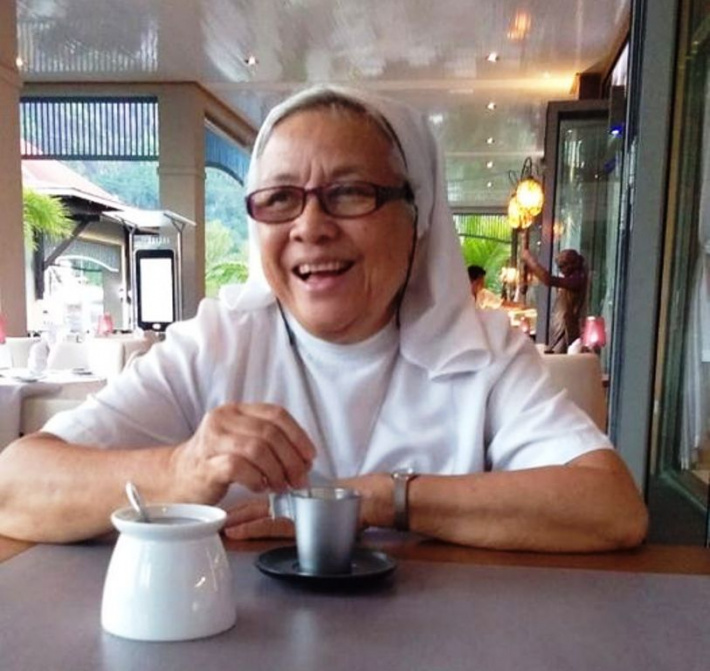 Sister Bernadette of the St Joseph of Cluny (Seychelles) Congregation, whose real name is Isa Yokowo, has passed away after a short illness.

Aged 77 years old, she died yesterday morning, Tuesday January 19, 2021 at the Seychelles Hospital. She was from the Roche Caïman community.

Born on October 13, 1943 in Kokura, an industrial city in Fukuoka Prefecture on the island of Kyushu, Japan, Sister Bernadette was the fifth offspring of a Japanese father and Buddhist, Tamotsu Yokowo, who married her mum, Raymonde Camille, a Diguois. She had three sisters and two brothers – one of them the well-known musician Jack Yokowo. Probably most revered for his skills on the Hawaiian steel guitar, a feat that not many Seychellois can lay claim to, Jack died on June 12, 2014 at the age of 65.

Sister Bernadette was born at home because of the 24-hour curfew during World War II imposed as a result of aerial bombardment in Japan.

Sister Bernadette wrote in her autobiography that Kokura, where she was born – and she was almost two years old then – was the Americans’ primary target on August 9, 1945 but the bombardier couldn’t locate it because the area was clouded, so Nagasaki became the secondary target.

“Had Kokura been bombarded, I would not be here today. The mere thought of this fills me with wonder and gratitude for God’s Providence. I like to believe that the Lord had a plan for me, otherwise I would have been blown into smithereens.

“God in his loving Providence spared me, a toddler, a speck of dust in a far-east country, a toddler out of thousands of others, the only child with a Seychellois mother, the only person of her nationality in that part of the world – the thought overwhelms me with a deep sense of wonder and gratitude. This feeling becomes a prayer; a thanksgiving,” wrote Sister Bernadette in her autobiography.

She spent the rest of her childhood years on La Digue. In contrast to Kokura where she was confined in the house for long periods of time, she spent a carefree childhood on La Digue in spite of being poor.

“I was a bit of a tomboy, loved swimming, fishing, climbing trees, tomboyish pranks and rough-and-tumble games. The sea and anything to do with it was my passion. It held a great fascination for me. I could spend hours alone by the sea, exploring every nook and cranny, fascinated by anything I found – coral, fish, sand, shells and driftwood without being bored.

“I also enjoyed school immensely. Once, a boy and I were the only ones to turn up for school in spite of torrential rain. I was disappointed to have to go back home. An experience that stands out in my memory and which boosted my self-esteem and filled me with pride was the day a group of education officers visited our school on La Digue. I was still in lower class then. The teacher had placed a chair on a long table which served as our desk and our class had to draw it. I remember our VIPs going round, inspecting our drawing of the chair. They stopped when they got to my place and taking up my small slate, they seemed to comment on my drawing admiringly and appreciatively. I understood that I had done a good drawing. Later on I realised that the visitors had singled out mine as I had shown a certain command of perspective in my drawing of the chair,” she continued.

She developed a loved for catechism at a very young age and she wrote that it was during a Corpus Christi procession when, as First Communicants they were chosen to shower the Blessed Sacrament with rose petals as it was being carried around, she felt the first stirrings of her vocation.

“I believe it was during this religious experience as a young child that the tiny seed of my vocation was born. And this, in spite of the fact that I had not met any religious except the Franciscan Parish priest. I didn’t know anything about consecrated life. I remember, however, being drawn to do something beautiful for God, to be close to him. This vague desire remained buried until I started secondary school.

“I started my secondary education at St Agnes – one could say it was Bishop Olivier Maradan’s School. Sister Hugh Darcy was then head of the school. His lordship used to come regularly to the school. One day, on the feast of Our Lady of Lourdes, he told us the story of St Bernadette Soubirous at the end of which he asked the class who would like to become a religious, a sister. Almost mechanically and very timidly I raised my hand slightly. I thought and prayed no one had noticed it. But my gesture had not gone unnoticed to Sister Hugh’s sharp eyes. Later on she asked me if I meant what I had done. My feeling was that of being caught. This is when I started my religious journey although remotely,” she wrote.

After completing her O-Levels at the Regina Mundi Convent, she taught for a few months in the Preparatory School and then left for Madagascar to begin her Postulancy. After receiving the habit she was sent to France along with all the others in the Novitiate. She did her Novitiate in Thiais and then in Paris where she made her First Profession on September 12, 1966.

It was in the late 60s that Sister Bernadette left Seychelles for Birmingham, England to pursue her studies at the Newman College of Higher Education (now Newman University) and she graduated with a Bachelor’s degree in teaching. She taught at the former Regina Mundi, former National Institute of Education (NIE) and different secondary schools before retiring in the 1990s.

Despite being a religious, Sister Bernadette never lost her love of the sea, of fishing, of music especially singing and her flair for drawing and painting. She was part of the Choral and Music Society of Seychelles choir.

“{…} I know I have touched people’s hearts and made them happy with my singing. This happened to people who never knew me. I believe this gift is the Lord touching their heart through my voice,” she continued.

In 1984, she had her obedience for an ad-extra mission in Sierra Leone, a country which she said broadened her horizon. Having become acquainted with a host of things – beautiful, fun loving and easy going people, apocalyptic thunder and lightning at the break of rainy season, acid flies, monkeys, vultures, ‘driver’ ants, snakes especially black mambas, she noted in her autobiography that “Africa is a place where one lives every experience intensely”.

In 2016, she celebrated her Golden jubilee (50 years of sister hood) and was later made in charge of the catechesis and she taught catechism at the Independent School of Seychelles.

Sister Anne, the Provincial of the St Joseph of Cluny (Seychelles) Congregation described Sister Bernadette as a “person who loved life, she was artistic, played different instruments like violin, keyboard and guitar. She also loved nature and had a great sense of humor”.

On a mission in Arusha, Tanzania, since September last year, fellow sister Maria Nita Servina wrote on her Facebook wall: “Goodbye Sister Bernadette. I am going to MISS YOU WHEN I RETURN TO Seychelles. I am sure the angels will be singing to you with the same sweet voice that you used to sing for the Sisters’ funerals: ‘Welcome Home’”. 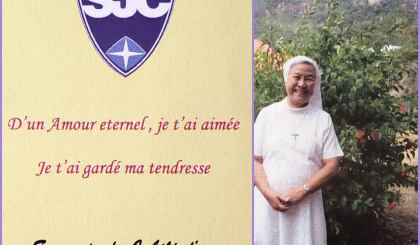