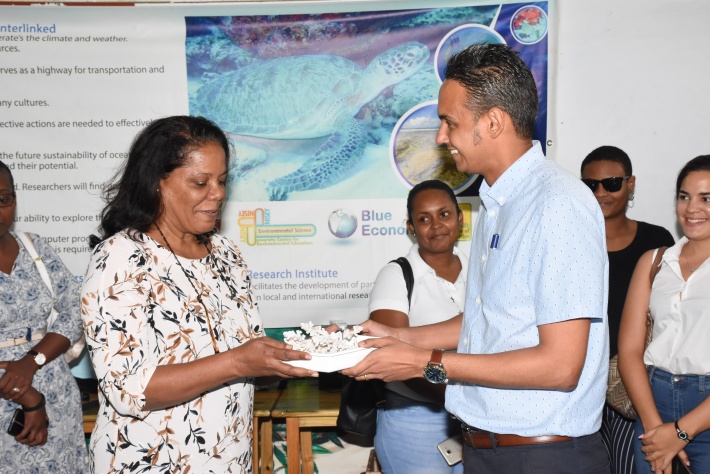 Over 50 coral samples collected from the ‘First Descent’ Nekton Mission, the first deep sea exploration of the Seychelles waters, now forms part of the University of Seychelles’ coral collection facility.

The corals were collected during Nekton’s groundbreaking 48-day mission in March and April this year, in which it explored marine life beneath 30 metres and more near the Aldabra, Amirantes and Farquhar groups.

Throughout the expedition, scientists and researchers conducted more than 300 scientific deployments wherein they collected around 1600 biological samples and 20 terabytes of marine data.

It was the principal secretary for environment Alain de Comarmond who officially handed over the coral samples to the registrar of the University of Seychelles (UniSey), Luciana Lagrenade, during a ceremony yesterday.

This also marked the inauguration of Unisey’s coral collection facility which was first initiated by the Island Conservation Society (ICS), spearheaded under the GoS-UNDP-GEF outer islands project.

Kelly Hoareau, director of the James Michel Blue Economy Research Institute at the UniSey, explained that the coral specimens are expected to be used for educational and research purposes for its students and other interested parties.

“The purpose is to create a catalogue of coral fragments to help identification for educational purposes and also to support research,” Ms Hoareau stated

She further added that the coral facility aligns with the Blue Economy Research Institute’s “efforts to support a stronger national coral monitoring network along with more research to support a healthy ocean as we advance our Blue Economy agenda”.

The corals specimens collected in the Nekton Mission are welcomed additions to the existing coral specimens stock that were gathered a few months ago for the coral collection facility.

The chief executive of ICS, Michelle Murray, highlighted the importance of promoting conservation and restoration of ecosystems, of which the coral reefs provides critical balance and equilibrium to the planet.

“It is, for me, shocking and deeply irresponsible that people seem to have regarded the loss of these rich natural systems as somehow just being the ‘price of progress’, rather than the arbiter of our vulnerability and the harbinger of our future,” Mrs Murray strongly stated.

Nonetheless, a large number of organisations in the country are contributing to the conservation of coral reefs in Seychelles which have, over the years, been the victims of destructive phenomena such as bleaching.

The event included various presentations from some of these organisations such as Global Vision International (GVI), the Seychelles National Parks Authority (SNPA) and Marine Conservation Society Seychelles (MCSS) that are actively working to preserve corals and its biodiversities.

Meanwhile Dr Jeanne Mortimer from ICS showcased the importance of sea grass to both marine life, particularly to corals, and the coastline.

Other presentations of the day were done by PS de Comarmond, who provided an overview of the Nekton-Seychelles partnership, and Clara Belmont, a technician at the Seychelles Fishing Authority (SFA), who participated in the Nekton Mission. 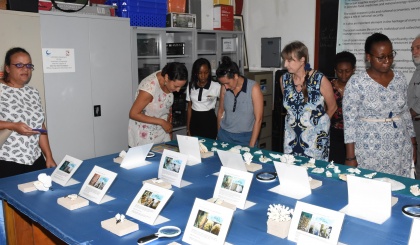 Viewing the new additions to the UniSey’s coral collection facility