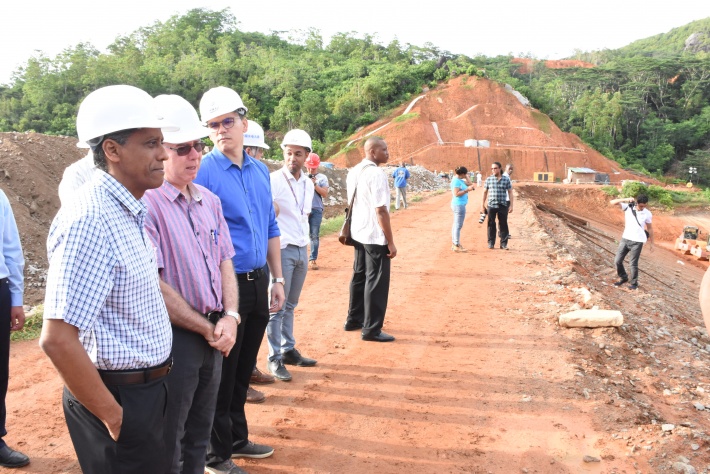 President Danny Faure yesterday conducted a visit to the La Gogue dam and is said to be impressed with the progress of work, despite minor delays and setbacks caused primarily by persistent rainfall over recent months.

Following the visit and a brief meeting with President Faure at the project site yesterday, the chief executive of the Public Utilities Corporation (PUC) Philip Morin stated that President Faure is happy with the progress made on the project to raise the dam by 6 metres, which is around 45 percent complete thus far.

“The President was quite impressed with the complex work going on and we explained the difficulties and delays that we have encountered and we are getting a lot of support from the government so we can materialise the project to the benefit of all of us, Seychellois,” Mr Morin stated.

Mr Morin explained that once the inside embankment reaches the same height as outside, both will be raised to 6 metres.

Besides the embankment, work is also underway on the spillway, a structure used to provide the controlled release of flows from the dam into a downstream area.

“Intense work is also going on the spillway where water will be discharged when there is an overflow and this is delicate work; we must ensure that we get it right because if the water is not drained as it should, it can cause some damage when it is over-flowing so this is equally important as the wall,” Mr Morin said.

“The spillway is an intense work and the weather is breaking some of the concrete. The work has to be done in more than one day and this has been a challenge to get the equipment and materials necessary, to mix the concrete during a long interval and workers are being pushed to complete the work in one block. You cannot do a portion today and continue the rest tomorrow when putting concrete on such an important part,” Mr Morin remarked.

As for the intake tower, a vertical tubular structure with one or more openings used for capturing water from the reservoir and conveying it further to a water-treatment plant, Mr Morin remarked that the pipes in the tunnel are being replaced and the intake tower itself is being repaired since it has been in service for over 40 years. Moreover, the intake tower will need to be raised to a higher point on account of the water level which will be 6 metres higher by the time the work is completed.

The project to increase the dam’s capacity was scheduled to be completed by April or early May 2020, but due to persistent rainfall over recent months, the main contractors, Sinohydro, are experiencing some delays.

“Instead of being able to complete the work in May or April, now it will go on to June 2020. This is because there’s been quite substantial rainfall in the past three or four months and consequently it has been difficult to do the earth work as it’s all got to do with earth work, moving massive amounts of soil and this is difficult with the rain,” Mr Morin remarked.

The rainy weather also makes it difficult for the heavy-machinery and vehicles to move around the site as the mud is very slippery and increases the risk of serious accidents.

Despite the possibility of the project running slightly longer than anticipated, Mr Morin concluded by noting that the delays have come at no extra cost and that the project is on budget.

“We expect that we will give the contractor more time to complete the work but we do not expect to pay more for those delays. They can get on with the work, complete it within the extra time but PUC does not expect to be paying extra for that,” Mr Morin concluded.

The accompanying photos show the Presidential delegation on their tour of the La Gogue dam site yesterday. 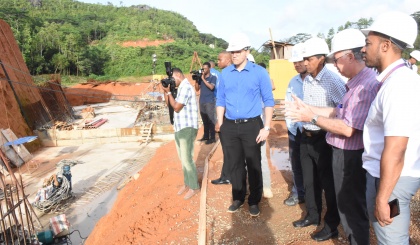 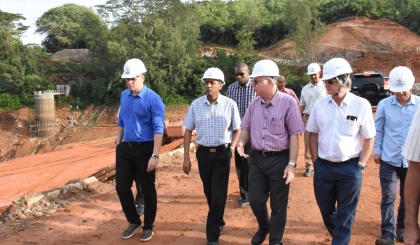