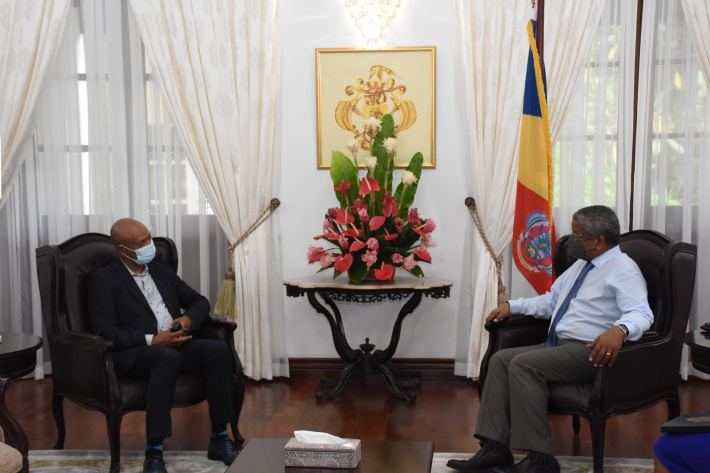 The role that science plays in the country and how to encourage more students to get into science and technology were among the topics discussed when Washington DC based Seychellois Professor Dr Ralph Etienne-Cummings met President Wavel Ramkalawan at State House yesterday.

Dr Etienne-Cummings’ visit comes in the wake of his recent election to the American Institute for Medical and Biological Engineering’s College of Fellows (AIMBE).

Speaking to journalists after the meeting with President Ramkalawan, Dr Etienne-Cummings noted that they discussed the role that science plays in the country, his upbringing, how to encourage more students to get into science and technology and the role of Seychellois who study abroad.

Dr Etienne-Cummings is an academic in electrical engineering. After receiving his doctoral degree, he taught as an assistant professor at Southern Illinois University before moving to Johns Hopkins University in 1998.

In 2002 he began teaching at the University of Maryland while founding and directing the Institute of Neuromorphic Engineering.

He returned to Johns Hopkins and in 2004 was appointed Associate Director for Education and Outreach of the Engineering Research Centre on Computer Integrated Surgical Systems and Technology.

In 2006 he was named a visiting African Fellow and Fulbright Fellowship Grantee for his sabbatical at the University of Cape Town in South Africa.

In 2008 he became a full professor of electrical and computer engineering.

He has served on numerous boards and committees, including his appointment as chairman of the IEEE Circuits and Systems (CAS) Technical Committee on Sensory Systems and on Neural Systems and Application, and has served as a consulting engineer for several technology firms including Nova Sensors and Panasonic.

In 2012 he was recognised by the National Science Foundation as a History Maker for his contributions to electrical engineering.

“I began my career in physics and when I started my post-graduate course I studied biology and engineering as I wanted to learn how our brain works and how it could be used to design computers who can mimic our brain,” he said.

Dr Etienne-Cummings noted that through lectures that he has given at secondary schools he has seen that there are a lot of students with potential, noting that we have to adapt technology in our daily lives.

“There are a couple of areas where we can improve on such as the price of internet and make it accessible to everyone. We should also start incorporating digital apps that will help us in our day to day activities,” said the professor.

He also touched on businesses who should take advantage of technology and science in order to deliver a better service.

“Unfortunately I think that the government is one of the only outlets available for returning graduates who study STEM to work. It would be better if there were other businesses who depend on technology to deliver their services and this would provide opportunities for these graduates to use the expertise that they have acquired,” he noted.

Another point the engineer talked about is establishing a lab that can focus on creating and developing new technologies instead of relying from foreign entities.

He remarked that this would be a good idea as it will give students the opportunity to work and learn in that field without having to leave the country as well as offer services to businesses.

In previous years the National Institute of Science, Technology and Innovation (Nisti) was tasked with bringing STEM into the schools and getting students interested in a career in that field. Now that the organisation is being restructured, Dr Etienne-Cummings noted that he supports the restructuring.

“What I will say is that we should never forget that science, technology and innovation plays an important role in the future of a country especially one as small as Seychelles,” he said.

He continued by adding that STEM programmes in other countries are standalone entities but since we live in a small country having Nisti incorporated within the ministry of entrepreneurship will give Nisti more visibility and allow it to carry out its work more efficiently.

In honour of the International Day for Women and Girls in Science, which incidentally falls tomorrow, Dr Etienne-Cummings said that he has been a strong advocate of women in science since the beginning of his career.

“I think it is very important that we see more women participating in science because women can do anything that a man can do so there is no reason why they should be excluded. Seeing more women who have achieved and become the best in their field will encourage other girls to take up STEM,” said Dr Etienne-Cummings.