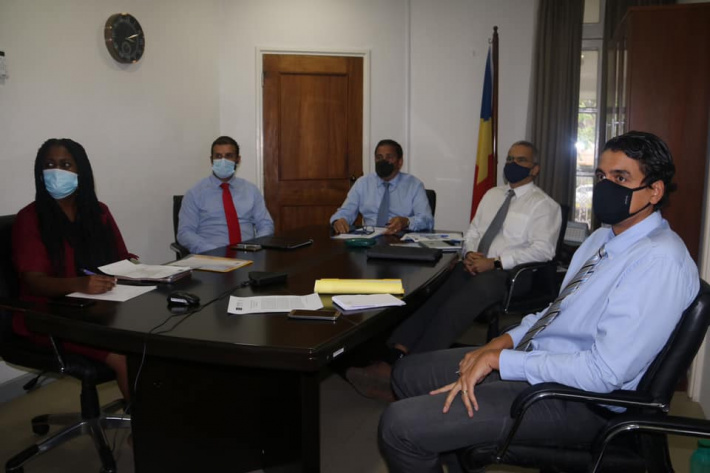 Minister Radegonde (at head of table) leading the Seychelles delegation at the virtual meeting (Photo source: department of Foreign Affairs)

Seychelles is officially Chair of the Strategic Planning Steering Group (SPSG) and Steve Lalande, director general of Regional Affairs at the Foreign Affairs department, has been appointed to chair the Group.

The announcement was made yesterday by the Minister for Foreign Affairs & Tourism Sylvestre Radegonde while delivering the opening statement at the first meeting of the SPSG which took place virtually.

The establishment of the SPSG is based on the recommendations of the 22nd Plenary Session of the Contact Group on Piracy off the Coast of Somalia (CGPCS), held in Mauritius in 2019, which acknowledged the need for the Group to adopt a new strategic direction and map out the future of CGPCS.

The SPSG is tasked with developing the draft ‘CGPCS Strategic Plan’ for consideration and approval by the Plenary Session of the CGPCS, and to maintain and update the Strategic Plan and any derivative support plans as may be directed by the CGPCS Chair or Plenary.

In his statement at the meeting yesterday, Minister Radegonde addressed various areas where the CGPCS has been successful in the suppression of piracy off the coast of Somalia and emphasising on the importance to remain alert as piracy, organised crime and other illegal activities remain a menace to our collective security and livelihoods.

Through its chairmanship of the SPSG, Seychelles hopes to revitalise the work of the CGPCS around the following key areas: