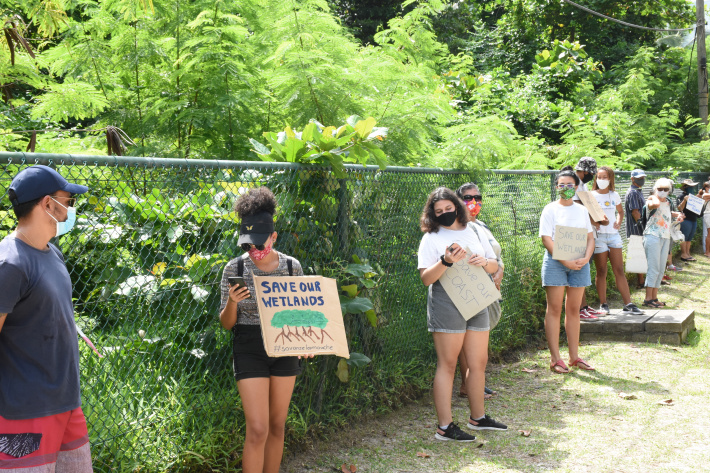 A group of concerned citizens rallied together on Saturday in front of the site of the controversial Anse à la Mouche four-star hotel project to peacefully protests against the development.

Around 50 people from Anse Boileau’s sub-district Anse à la Mouche – from non-profit organisations and environment activists from across Mahé – lined up with placards to express their dissatisfaction.

Their main points of contention with the development include its irreversible impact on the wetlands in the area, access to the beach and road diversion which will cut off the community.

Those who attended the demonstration were able to sign a petition, addressed to President Wavel Ramkalawan, urging the government to renegotiate and review the terms of the project.

In its first phase, the project intends to build a sprawling 120-room hotel in the wetland section of Parcel C7983 at Anse à la Mouche, which petitioners state goes against the spirit of the Ramsar Convention on Wetlands, to which Seychelles is a signatory.

Aside from the 120-room hotel, the development plans for the area includes facilities for entertainment, tourism and retail as well as residential spaces.

“The issue is that this project has been in the works for some time but it is only recently that machinery has been moved in after curfew. We then learnt that approval was given, some say on October 2 last year but the chairman of the planning authority last night (Friday) in an interview said October 10, but clearly it happened very quickly in the few months before the elections,” said a resident of Anse à la Mouche, Peter Purvis.

“The economic impact assessment (EIA) process was not followed correctly. There were public meetings where a lot of people came to express their concerns and nothing was done about it. Up until last week, we were under the understanding that the subject was still being considered and that a lot of things were still under consideration,” added Mr Purvis.

“You can see from our photos we shared on Facebook that it is complete, utter destruction at the development site. They are throwing rubbles into the marsh which we are asking to be protected and this is why we are activating quickly to draw attention to it.”

“We are asking for a renegotiation of the contract and we want the government to take notice, and so far they have not said anything at all which is really worrying.”

Mr Purvis noted that if the foreign investor is so adamant about building a new hotel in the Seychelles, it could look into acquiring abandoned properties such as the Mahé Beach hotel or Reef Hotel.

“At the time of the lease, they received the property at R75 per square metre which is ridiculous. The lease then said that these people can sub-divide the plots and sell them freehold to whomever they please. The government cannot hold back on giving them approval for these, which means that someone is going to be making a huge amount of money on the back of what is being passed off as a hotel development […],” continued Mr Purvis.

Member of Sustainability for Seychelles (S4S) and resident of Anse à la Mouche, Marie-Thérèse Purvis, noted that the organisation and other concerned citizens are receiving the backing and support of the Citizens Engagement Platform Seychelles (Ceps).

“Ceps also see that the development will divide the community in two, and destroy the wetland despite Seychelles being a signatory to the Ramsar Convention since 2005. There is about 10% of wetland remaining on Mahé,” said Mrs Purvis.

“The challenge we have encountered is that although we attempt to communicate with the government, we do not get information. We sent them our scoping report after the EIA meeting held in August 2019 and we did not get much feedback from them.”

“We contacted Nanette Laure from the environment ministry at different occasions and they told us that the project had gone to planning; that the only reservations that the Ministry of Environment had was the new road which would destroy too much of the wetland and had asked that it is built higher uphill.”

Unfortunately, Mrs Purvis said they learnt that the project was going ahead in October 2020 through the grapevines such as from contractors who had received tenders related to the project.

“We called the Ministry of Environment and Planning Authority again; we sent out letters and documents again so it is not true when Mr Cyril Bonnelame (chairman of Planning Authority) said that only one person appealed against the project.”

Another concerned citizen, Andrea Radegonde from Anse Royale, explained that she attended the public meeting on the project in 2019 and since then has followed this situation closely.

“We have a petition which people are signing on paper and a second petition online, which as of this morning has about 1,800 signatures, so we do have support,” said Mrs Radegonde.

She noted that a project of this magnitude does not make sense for Seychelles because the country cannot claim to champion sustainable development and yet green light such a project.

In regards to the road diversion, Mrs Radegonde stressed that a new development should always seek to fit in with the community rather than make a whole community change their lifestyle and daily routines.

One of the younger protesters, Antigone Frichot, who has been extremely vocal on the issue on social media, said that she hopes the wetland can be preserved for this generation and the generations to come.

“We are standing on part of the 10% of marshland left in Seychelles and marshes protect us from coastal erosion and have loads of endemic animals, plants and mangroves. It is a really important part of our biodiversity and culture; the children of our children won’t see our untouched natural marshes because it would have all been built on. We have already built on marshes at Port Launay, Beau Vallon and at reclaimed lands such as Eden.”

Member of the National Assembly for Anse Boileau, Philip Arrisol, was present at Saturday’s demonstration and noted that he cannot take sides on the matter.

“I represent all of the constituents of Anse Boileau, and some residents of Anse Boileau are against the project but some are in favour of it. The opinions of both sides must be taken into account and if we need to reinitiate discussions we will do so,” said Honourable Arrisol.

He added that he would bring the matter to the attention of the National Assembly, such as through a motion or question for the relevant authorities, but this will depend on what he is advised to do.

The accompanying photos show some highlights of Saturday’s protest. 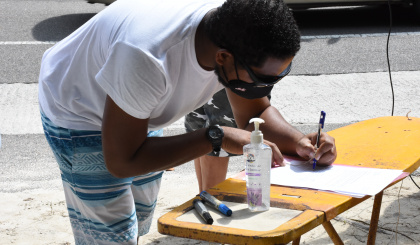 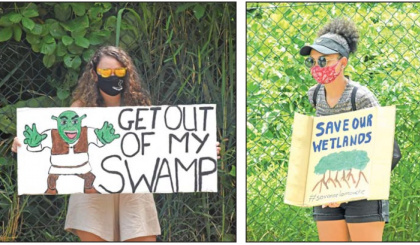