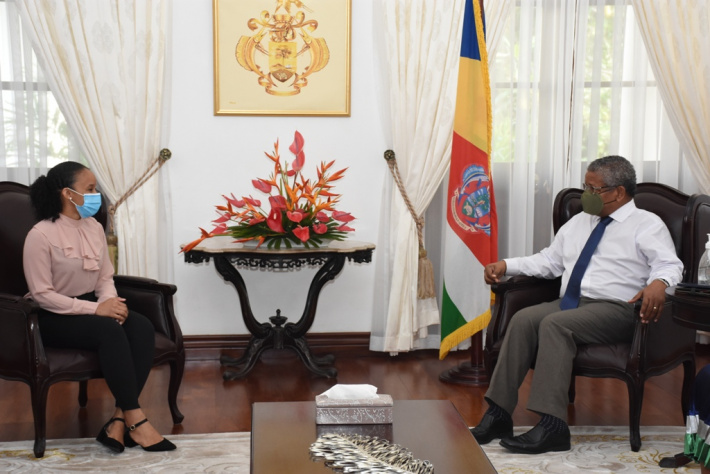 Ms Baron achieved a distinction in her Masters of Science (MSc) in Forensic Accounting course she completed in September 2020 at the Sheffield Hallam University in the United Kingdom.

Speaking to the press after her meeting with the president, Ms Baron said that apart from talking about her achievements and career path, most of her discussion with the head of State was private and confidential as it related to such sensitive subjects as tackling financial crimes.

She however said that President Ramkalawan has given her much advice in relation to combating financial crimes as well as words of encouragement to motivate her to continue her career in the financial sector.

She noted that she is still doing some research on different places of work where she could pursue her career.

She said she would like to share her acquired knowledge to others for more accountability, transparency and better governance in the financial sector.

She further noted that this will bring more benefit for the country while also help in eliminating financial criminal activities happening in the country.

She is one of the first two awardees of the Central Bank of Seychelles (CBS) scholarship programme for the 2019 academic year.

Unlike those of other universities, the programme which she followed had both theoretical and practical components which gave her exposure to notable organisations like the Association of Certified Fraud Examiners and the HM Revenue and Customs UK.

The Guy Morel High Achievement Scholarship programme, launched in September 2018, has to date awarded four scholarships for masters and undergraduate.

Apart from Ms Baron graduating with a masters, a second recipient is completing her second year of undergraduate studies. Two other 2020 recipients are still waiting to begin their studies this year which for the moment has been put on hold as a result of the Covid-19 pandemic.

The Governor of CBS, Caroline Abel, who accompanied Ms Baron to State House, said that the scholarship programme is still on offer as the training scheme is for the long-term.

She said the country lacks potential candidates with scarce skills in specific areas within the Financial Services sector and this has prompted CBS to come up with such initiative.

She noted that while CBS was concentrating on training its own people, it has seen it fit, through the training programme, to also offer people from outside the possibility to go on the training and to pursue a career in the financial sector which will help the country acquire a pool of financial professionals to fill the existing gaps within the sector.

Governor Abel also stated that the CBS scholarship programme, through its financial journalism course, also caters for training of journalists who are interested to pursue a career as financial investigators.

She called on journalists and other people from outside to seize the given opportunity to develop their career and ability while they will also be of great help to the financial sector.