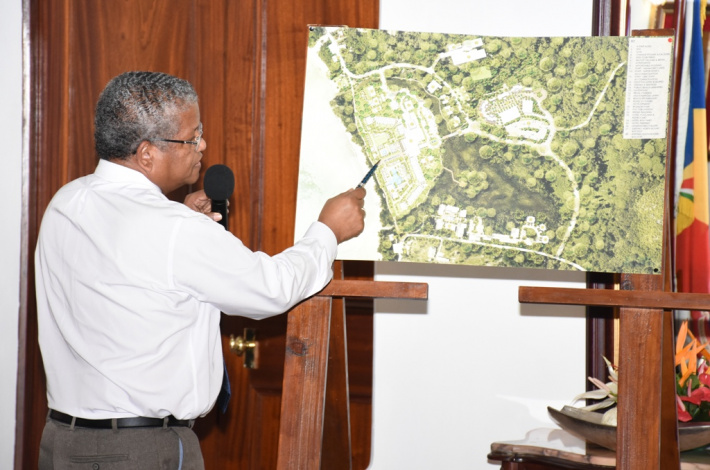 In a move that has potentially brought an end to the controversial debate on the Anse à la Mouche project, President Wavel Ramkalawan has affirmed that the government has no intention of putting a stop to the project.

Following petitions from conservationists and non-profit organisations such as Sustainability for Seychelles and a peaceful demonstration on Saturday, President Ramkalawan yesterday held a press conference to address the issue.

The president made abundantly clear that the new government would carry on with the project which was negotiated and agreed upon during the era of former President Danny Faure.

While situating the government’s position on the matter, President Ramkalawan was flanked by Vice-President Ahmed Afif, Minister for Agriculture, Climate Change and Environment Flavien Joubert and chairman of the Planning Authority board Cyril Bonnelame.

“Given that the petition was addressed to me, I felt that it was only right for me to come forward to explain the government’s position and for us to have a better aperçu on the project,” said the president.

“I would like to thank the youths of Seychelles; many young people have showed an interest in this project and I want to assure the young environment activists that they have a partner. This administration is here to protect our environment at all cost and that together we can continue to protect it,” he added.

President Ramkalawan also spoke of striking the right balance between conservation and development.

With the country faced with a health and economic crisis, the President stressed that the country needs an inflow of foreign exchange into the economy.

The project is expected to benefit local contractors, such as UCPS that has already secured a contract with the developers, consultants and other technical persons and businesses.

This point was further solidified by VP Afif who stated that the Anse à la Mouche project will directly bring in US $25 million in the next 24 months.

According to President Ramkalawan, who provided a presentation of the project – map included – the hotel project will not see the destruction of wetlands in the area. He asserted that the marshes will be preserved and will not be land-filled in, as the petitioners had believed.

In regards to the road diversion, President Ramkalawan explained that the diversion is necessary because the developers plan to turn the current Anse à la Mouche road, which runs on the coastline, into a promenade similar to Beau Vallon’s Golden Mile.

“The beach will remain accessible to the public,” he added.

Meanwhile the road from Les Canelles will be diverted around the project to the Anse Boileau ice plant, and this will amount to a 2-minute trip.

The Anse à la Mouche project includes the construction of a beachfront four-star hotel in its first phase, followed by a village with retail and entertainment facilities “open to everyone” and residential condominium projects.

Much like Ephelia Resort and Club Med, the hotel project will have its own utilities and sewerage system, and hence will not put unnecessary load on the Public Utilities Corporation (PUC).

“According to the agreement we have seen, the government leased the place for 99 years with an upfront fee of US $4.5 million and R1 every year,” said VP Afif.

According to VP Afif, this would amount to about US $5.5 per square metre, much lower than the market price of land in the country, but added that this was justified because the land was being leased rather than sold.

The upfront fee has already been paid to the government, confirmed the vice- president.

Mr Bonnelame added that the government had also in the past received a deposit payment of US $3.5 million on the property from the initial Qatari investors, but their development plans for the area never took off.

“The conditions for those acquiring the condominiums will be similar to the villa policy[…] The agreement between the government and the Anse à la Mouche Development allows them to remove the area on which the villa is located from the lease and a person can buy the villa. But the villa remains in the pool of the hotel, and continues to be managed by the hotel but with a private proprietor,” explained VP Afif.

“The benefit for the country is that the government is not the one investing in housing for Seychellois. If the developer can build houses that Seychellois can acquire then it is a good thing. We will not be involved in the pricing but the government will ensure that any residential property that is sold to a foreigner is sanctioned – this includes a 1.5% processing fee and a sanction fee of 5%. You will need to gain the approval of the government.”

The president, vice-president and officials present acknowledged that there are rooms for improvement in communication between the public, the government and developers, adding that the new government strives for clarity and transparency.

In that line, President Ramkalawan noted that the economic impact assessment (EIA) process will be revised and improved. 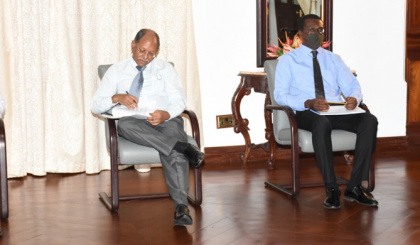