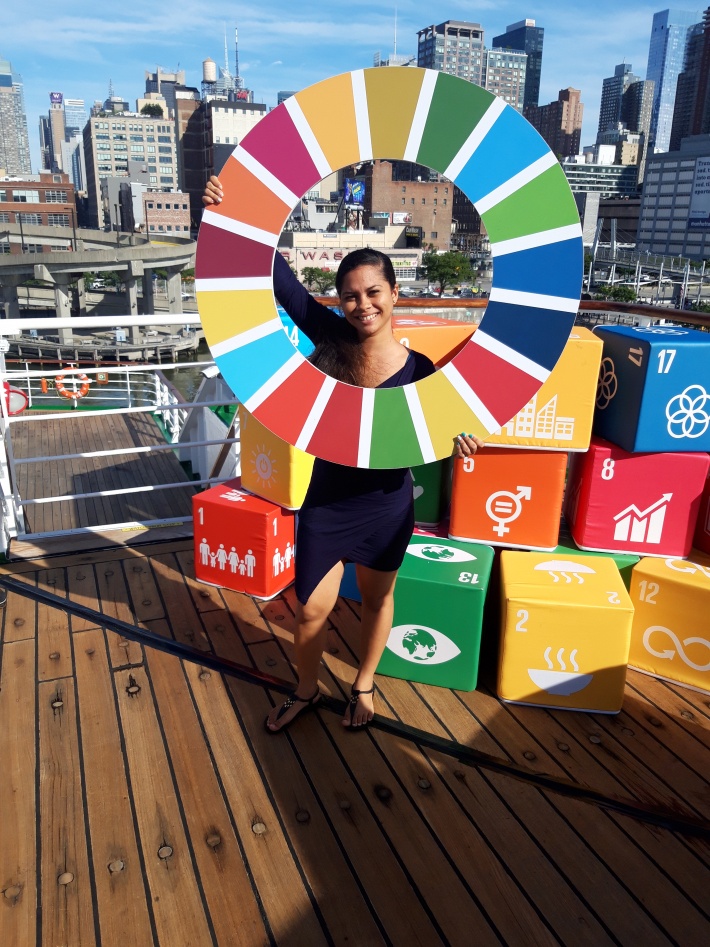 During the sea voyage which started on May 24, the first-year School of Advance Level Studies’ (Sals) student and member of the Ocean Project Seychelles (OPS) held presentations and shared ideas on ocean pollution and climate change issues with passengers onboard and also with environment stakeholders in the five countries visited, namely Malta, Spain, Morocco, Portugal and the United States of America. She also participated in cultural activities.

Nathalia’s presentations were on issues affecting Seychelles in regards to climate change and ocean degradation and that was mostly on plastic pollution, the banning of plastic bags, coral bleaching, coastal erosion and changes in Seychelles temperature and weather pattern. The days spent at sea involved close sessions with facilitators.

“I’ve learned a lot, be it ocean protection or climate change and also a bit on the culture of the different nationalities onboard and of the countries we visited. It was a great experience for me meeting so many energetic people fighting for the conservation of the environment. It’s a voyage I will never forget,” Nathalia said, noting she would have liked to repeat the trip but she can only do it once.

Nathalia said that most of the presentations were held using the ‘Talanoa’ method, a traditional method of dialogue used by ordinary people in the Pacific Ocean to informally speak to their leaders on the basis of three questions: Where are we now?, Where do we want to go? and How do we get there? She noted that all presentations were in English and had to be translated into Japanese as most of the passengers onboard were Japanese along with some Taiwanese, Singaporeans and Hong-Kong Chinese.

Her voyage started in Malta where she flew over there on May 21 and arrived on May 22 in time to catch the vessel and to meet the other youth ambassadors from small island states – Esparama Qerewaqa (Fiji), Jevanic Henry (Saint Lucia) Elsei Tellei (Palau), Tapua Passuna (Tuvalu), Ashneil Jeffers (Montserrat), Nathaniel Soon (Singapore) and Khadija Steward (Trinidad and Tobago).

“In Malta the first activity was a talk on ocean degradation and climate change at Malta University for government officials, students, lecturers, professors and researchers. We learned about the effect of the rise in sea temperatures in Malta which has resulted in an increase in poisonous jelly fish.

“We also learned about the different educational mechanisms in place to raise awareness of the places of jelly fish occurrence and also how people get to differentiate the dangerous ones. They are using an app just to analyse the type of jellyfish when they are spotted. It was something interesting to know,” she said.

The ocean and climate youth ambassadors also made presentations on the effect of climate change in their countries and Nathalia’s presentation also included marine pollution in Seychelles. They also had the opportunity to meet and held discussions with George Vella, the President of Malta, who briefed them on the effect of climate on country and also on some environment policies in place. Back on Peace Boat they met with Malta’s ministers for Education, Environment and Foreign Affairs.

Leaving Malta and after two days at sea, the Peace Boat arrived in Spain for a day visit where the team visited the University of Grenada for talks with students which Nathalia said was a bit difficult because of the language barrier. She noted that they were lucky to have had a professor who understood some English who tried to translate their presentations. The young ambassadors later visited the Federico Garcia Lorca Park, designed with many sunny alleys and palm trees, and also met with activists for the Friday For Future, an NGO that holds protest worldwide against the lack of action on the climate crisis.

“It was interesting to learn about the way they conduct their protests. If they have an issue they will go and stage a protest on Fridays at that particular place where the issue originates. They had lots of stories to tell. Then it was back onboard the Peace Boat for another two days at sea to Morocco,” Nathalia said.

The boat docked at Port Tangier (Morocco) on May 28. As the country was observing Ramadan, most of the activities were held onboard where over two hundred visitors came for talks on climate crisis and the sustainable development goals (SDGs).

“We also managed to go ashore and met a group of young people at the Technopark who are very passionate about the environment. The park is an information technology business cluster complex located at Casablanca. These young Moroccans are passionate about eliminating plastic bags in the environment and I got to share with them some knowledge of how we do beach cleaning and data collecting in Seychelles. They need to collect the data to analyse progress and it was something they were not doing,” Nathalia said.

Though Morocco was one of the first countries to ban plastic bags, Nathalia said they learned from the young Moroccans of lapses in the ban enforcement on the use of plastic bags which has resulted in large quantities of plastic bags still being sold, especially on the black market. After an educational bus tour, they were back onboard for other climate change activities.

“People really do appreciate when I talk about our country’s effort to ban plastic bags and some even said they will try to introduce the concept in their own countries,” Nathalia said, noting that the night also included for the first time a cultural evening where all participating countries wore their traditional attire for a fashion show and cultural dance.

“I got the people on board to dance the moutya and you should have seen them. It was really fun. I also had to make a presentation on our moutya dance which I told them has its roots in the slavery era, but then came a lot of questions on our Creole culture,” Nathalia said.

From Morocco the boat travelled to Portugal and docked at Sao Miguel Ponta Delgada (port) on May 31 for a one-day visit. A series of talks were organised with the local authorities onboard where Nathalia and her colleagues learned about the different methods used to combat sea level rise. This was followed by other visits and presentations especially on the Soa Miguel marine park where rising sea temperatures have caused some algal species to disappear.

Leaving Portugal the same day, the Peace Boat made her way to the United States of America, more precisely to Manhattan, New York City. The passengers and crew were up early at 5am on arrival on June 7 in the morning for a glimpse of the lighted city with the Statue of Liberty.

“I’ve never seen a place where everything is so fast. Everything in New York is fast – from walking in the streets to getting service, it’s amazing. Everybody is busy,” Nathalia said.

A visit was organised for them at the United Nations’ headquarters where they were hosted to a special event related to SDGs initiatives and where some ocean and climate change youth ambassadors for small island states also made presentations.

“I had TV guys coming to interview me on plastic pollution. They must have heard about issues related to the banning of plastics in Seychelles because I had to answer a lot of questions related to that. I was really happy also to meet a colleague of mine, Angelic Pouponneau, who was in the US for the Ocean conference. After 17 days on the boat I got the opportunity to speak some Creole. It was funny for both of us,” Nathalia said.

Nathalia was able to attend Angelic’s presentation in relation to the UN’s Theme ‘The ocean and gender’ and later to make her own presentation on the role of the youth in regards to the protection of the ocean on a smaller panel with a crowd of ocean sponsors who included famous dive explorer Fabien Cousteau and Daniella Fernandez – the founder of the Sustainable Ocean Alliance.

“I told them that it was the youth of Seychelles who initiated the ban on plastic bags to government thus showing the impact of power of the youth working together when it concerns pertinent issues such as plastic pollution,” Nathalia said, noting that other youth ambassadors also spoke on climate change issues affecting their countries.

The presentation was followed by a visit to the Explorers Club – a scientific society founded in 1905 to promote scientific exploration and study, where Nathalia and colleagues met for discussions and sharing of ideas with the Ocean Heroes, a group of young people (11-18 years old) from different schools in New York who have teamed up to undertake activities in regards to safeguarding the ocean, such as beach clean-ups.

“From the UN we went back to the Peace Boat where another UN event was hosted and we made different presentations, concluding with a performance of a combined dance from the Pacific coming from Tuvalu and ending with the moutya from the Indian Ocean. That dance really caught the attention of the guests on board judging by the way they were reacting,” Nathalia said.

For World Ocean Day on May 8, activities were held on the Peace Boat where the civil societies were invited to showcase and promote their activities related to the ocean and climate change. The ocean youth ambassadors joined with 2000 participants for a beach clean-up at Rockaway beach. In view of the fact that most of the debris had to be dug or pulled out from the sand, Nathalia believes that this is an area where rubbish had been covered up instead of picked and disposed off in appropriate landfills.

She said that nonetheless the beach is very pretty and well managed with bins, life guards and security.

“At the end I had to speak on behalf of my colleagues in front of the 2000 as I was the only one in the group with gathered knowledge on plastic pollution. Everybody loved it when I talked about the ban on plastic bags in Seychelles. They all clapped and cheered, it was very touching,” Nathalia said.

According to Nathalia, she learned about the programme when she was only sixteen years old in 2017 through a presentation by the first young Seychellois who went on the UN peace boat programme the same year, Shikira Charlette from Sids Youth AIMS Hub (SYAH). The second young lady who went on the programme in 2018 was Frances Atienza Benstrong.

Not eligible to apply for the programme then, Nathalia was accepted on the programme early this year. Apart from filling out forms she had to produce a detailed report on how to manage a 90-minute presentation and also held a video call interview. While funding was only for the programme and stay on the ship, Nathalia had to seek her own funds for the flights and other small expenses. She is very thankful to the Ministry of Environment, Energy and Climate Change for granting her assistance under the Environment Trust Fund, and also to SYAH for support. 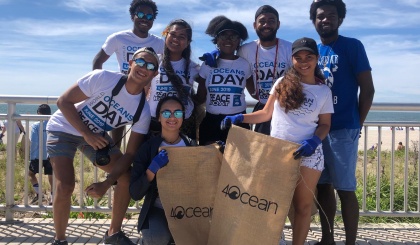 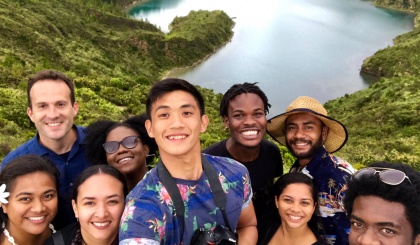 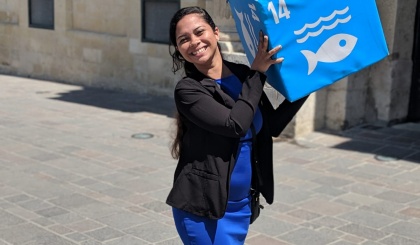 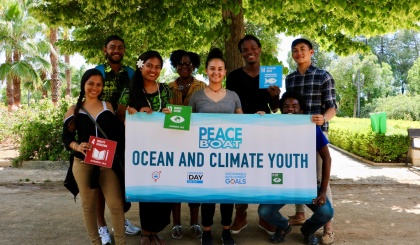 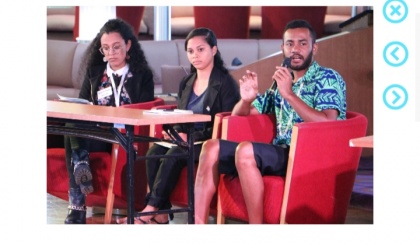 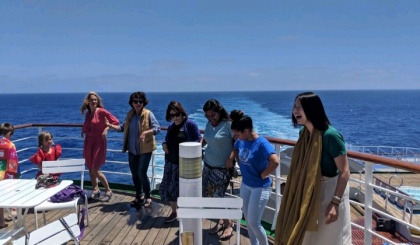 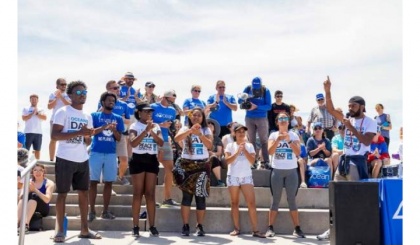 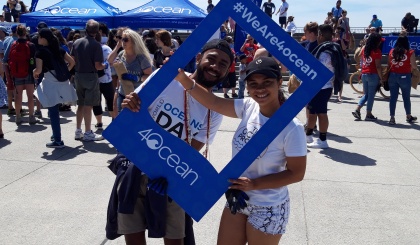 Government disappointed with EU for listing Seychelles as a non-cooperative jurisdiction on taxation | 20.02.2020