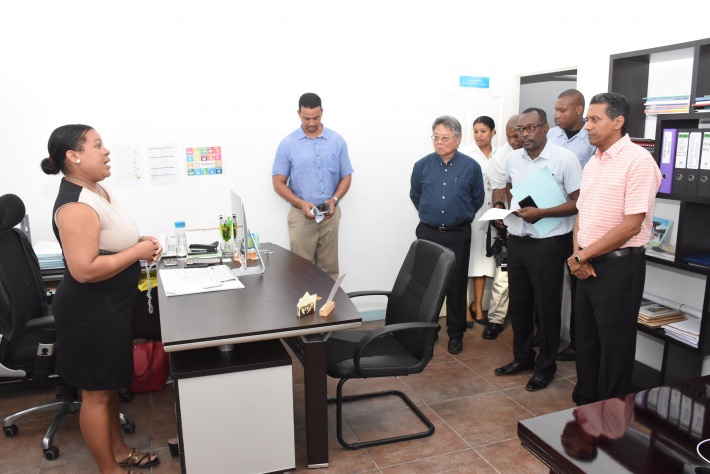 President Danny Faure yesterday conducted visits to the National Institute of Science, Technology and Innovation (Nisti) and the department of the Blue Economy, and met with the management and officials from the respective organisations for discussions regarding their daily operations, future plans and challenges faced by the entities.

The President’s visit started at Nisti, Bel Ombre, where he was welcomed by chief executive Xavier Estico who guided him on a tour of the premises and detailed the various projects on Nisti’s agenda for the near future.

Nisti is located in the building which formerly housed the Seychelles Tourism Board (STB) and currently, only part of the building has been renovated and refurbished while the other part is in a dilapidated state.

However, Mr Estico assured President Faure that renovation works on the facility are set to begin before the end of the year to house important projects including a Business Technology and Innovation incubator and a science hub for school students, projects that are important for fostering innovation in Seychelles.

“We had a discussion to brief the President on Nisti’s programme for the coming 5-10 years. We started off by showing him the important projects that will commence this year and which are of utmost importance. As per Nisti’s strategic policy 2016-2025, it is important for us to within the 10 years, make the transition into the knowledge-based economy,” he stated.

Among the projects on Nisti’s agenda is a Knowledge Management Engagement Platform, an important platform by which scientific information can be shared and accessed by everyone electronically.

Officials from Nisti also briefed President Faure on the business technology and innovation incubator, a concept developed by Nisti and an American consultant. Through this facility, business start-ups can access services and the support of national partners and collaborators to materialise their business ideas and make it commercial. The incubator will be managed through a digital platform to eliminate delays in the processes often experienced by entrepreneurs and owners of start-ups. Other projects include a science centre depicting the technological evolution in Seychelles over the years to be used by youths for educational purposes as well as during weekends and holidays.

According to Mr Estico, President Faure commended Nisti on the Science, Technology, Engineering and Mathematics (STEM) Programme offered by Nisti as an extra-curricular activity at school level and requested that they continue to reinforce STEM among youths.

“He is happy that we are making an effort to promote STEM and he asked a lot of questions about it. Our objective is to promote STEM especially now that we are talking about the fourth industrial revolution. Technology and innovation is fuelling the industries of the future and it is important that this is supported in the local context,” Mr Estico concluded.

Following his visit to Nisti, President Faure proceeded to the department of Blue Economy, located in the Oliaji Trade Centre, Victoria, where he was welcomed by the principal secretary for Blue Economy Kenneth Racombo.

President Faure toured the premises and interacted with the 15 employees within the department before a meeting with the PS and officials in which he urged them to improve sensitisation and education of the Blue economy concept at national level.

The main challenge faced by the department is people’s perception and understanding of the Blue economy which also makes it hard to bring all stakeholders together to work towards a vision.

“As you know, the Blue economy is a sector that the government is considering as a priority sector. At the same time, Seychelles being recognised in the African Union as the Champion for Blue Economy, the President discussed with us how we can improve sensitisation of the concept. Yes it is a concept, but we feel that our stakeholders do not necessarily understand what the Blue economy is and its importance,” PS Racombo said.

“When communicating a message, it is best to target it at the grassroots level since Blue economy is on the sustainability and already to explain what sustainability and how to achieve sustainability is a challenge. The President, as someone who is very experienced in this domain, and he has the champion title, gave us measures as to how we can better communicate the message,” PS Racombo noted.

Among the propositions put forward by President Faure are site visits in which officials from the department can have face-to-face discussions with fishermen and stakeholders who make use of marine resources as this is more effective than programmes disseminated through mass media.

Economist for the department Fatime Kante added that President Faure encouraged workers of the department to be confident and to venture out to form partnerships with other entities and ministries to bring the Blue economy to the forefront and ensure that all work together towards a common vision.

The accompanying photos show highlights of President Faure’s visits to Nisti and the department of the Blue Economy. 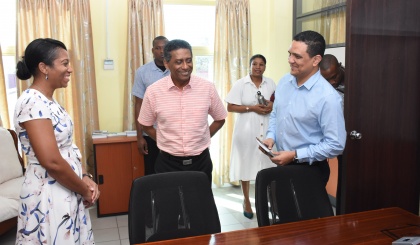 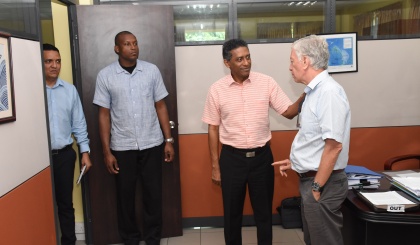 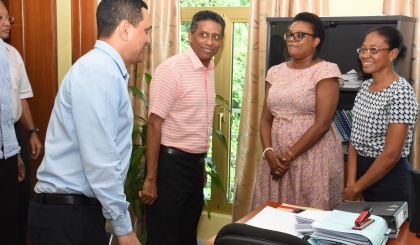 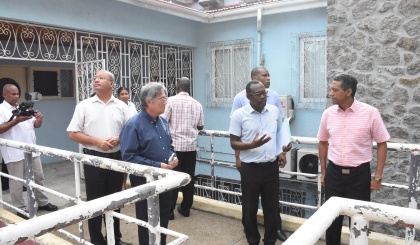 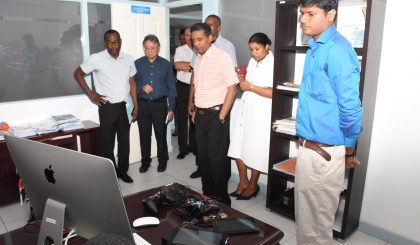