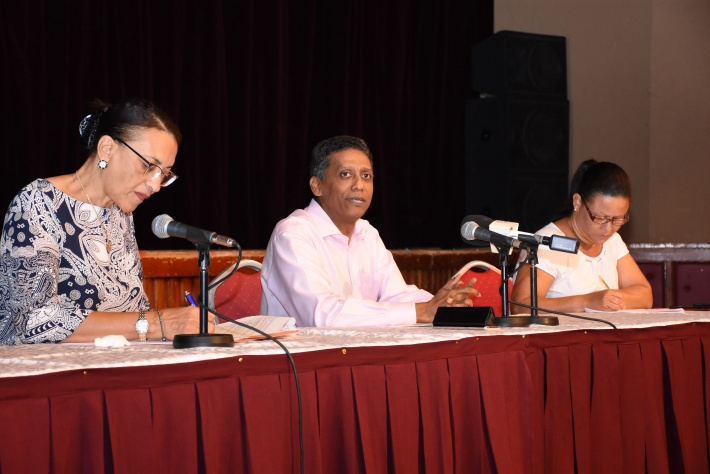 A group of director generals and directors as well as key officers of equivalent ranks from various public service ministries and departments attended a meeting chaired by President Danny Faure at the International Conference Centre Seychelles (ICCS) on Saturday morning.

The meeting forms part of the President’s routine consultation with public servants, providing a platform for them to openly discuss work in their respective departments, raise pertinent issues and challenges, as well as make suggestions of possible solutions moving forward.

President Faure flanked by chief secretary for Public Service, Jessie Esparon and the deputy cabinet secretary for Policy Affairs, Margaret Pillay, opened discussions with a review of actions and decisions from the last meeting held a year ago and reiterated the importance of consistent internal consultations and communications between ministries, departments and agencies to ensure smooth coordination in policy implementation.

During the meeting, officials also had the opportunity to make constructive contributions they felt would not only make a difference in their respective departments but for the benefit of the country in general.

Some of the key points discussed during the meeting included budget priorities, schemes of service, long service allowance, programmes to support and assist working parents with children during school holidays and a health insurance scheme for foreigners working in Seychelles.

The President also availed of the opportunity to express appreciation on behalf of government for all the good work being done by public servants and that despite challenges, they continue to work hard and remain focused in ensuring a service is delivered.

Speaking to the press at the end of the meeting, Ms Esparon said around 400 people were expected to take part and that the turnout was satisfactory.

She said the meeting had been conducted in an orderly manner where those present had expressed themselves freely and had raised some very pertinent issues which the government will consider to continue improving the public service. 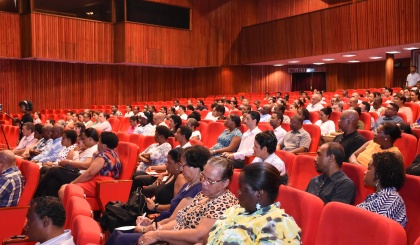