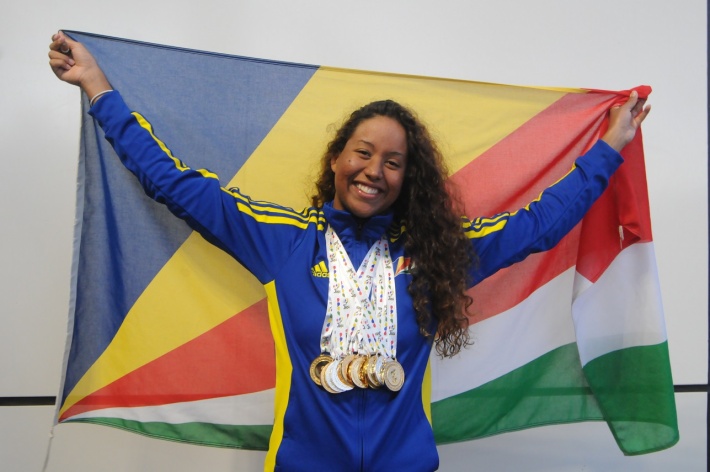 President Danny Faure has, on behalf of all Seychellois, expressed appreciation and felicitations to the country’s swimming queen, Felicity Passon, for her glittering and golden performance at the 10th Indian Ocean Islands Games (IOIG) taking place in Mauritius.

On the final day of the 10th IOIG swimming competition at Côte d’Or Swimming Pool yesterday, Passon collected her seventh gold medal which, along with her three silver and a bronze, makes her the best Seychellois swimmer ever for this competition.

The previous Seychellois swimming star of the IOIG was another female swimmer, Shrone Austin, who won seven gold, one silver and two bronze medals at the 7th Games in Madagascar in 2007 but Passon has eclipsed her feat with a better silver medals tally.

“Seychelles is very proud of you for this outstanding achievement and I am sure that I am echoing the sentiments of every one of us in expressing heartfelt congratulations to you,” President Faure says.

“A lot of courage, determination and fighting spirit is needed to win so many races, let alone break Indian Ocean Islands Games records, on a daily basis and over the very short period of time that the swimming competition lasted,” President Faure remarks.

“But it shows that seriousness, persistence, long hours of arduous training and the will to succeed pays off in the end and the result is sweet,” says the President.

President Faure adds that he hopes Passon’s passion for her sport and achievement will be used as example and springboard for other youths who want to follow the same path or excel in the sport that they do.

“In sport, like in everything else, success comes with hard work, perseverance, learning, studying, sacrifice and, most importantly, love for what you do,” President Faure says.

“I believe that as a young 20-year-old, this is only the beginning for Felicity and as a nation we all wish her the very best for the future.”

Passon won the bronze medal in the 4 x 100 metres medley relay along with teammates Palestrini, Elizabeth and Soukup with a clocking of 4:38.10.

President Faure also congratulates all other athletes who have won gold or any other medal, or who are still competing at the 10th IOIG wishing them success in their next matches or contest. He also thanks all those who have been eliminated after doing their best and trying hard.

“For those still in the competition, I am certain that there will be more victories and medals to come. Rest assured that as one nation we are all supporting you,” the President says.