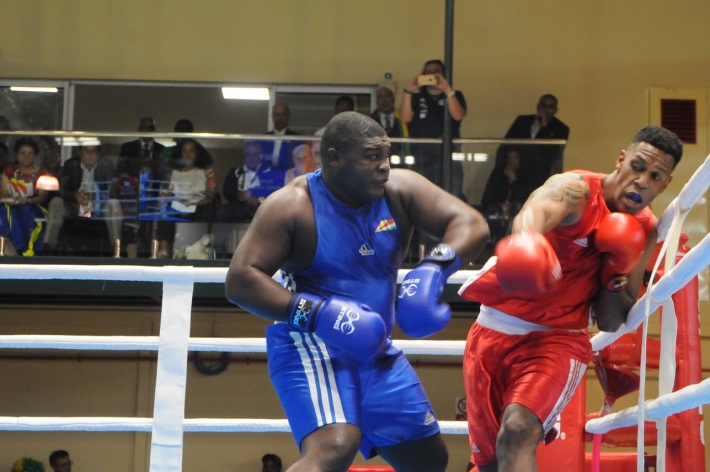 ‘KO for gold’, say our readers

On Wednesday night, people who were watching the 10th Indian Ocean Islands Games’ boxing semifinals enjoyed a real show from Seychelles’ reigning Sportsman of the Year and hard hitter Keddy Agnes who switched off the light of his Reunion opponent Romain Ticane.

Most of Keddy’s opponents are immediately intimidated by his stature and whoever was following the match live on TV in Seychelles were shouting and cheering for Keddy, Seychelles’ Tyson. And yesterday the talk of the town was his knockout win over Ticane and videos of the fight were shared on different social media platforms.

We are sure that a number of Seychellois will be at the National Boxing Centre in Vacoas, Mauritius while others will be in front of the TV sets read to watch Keddy, Jovet Jean, Shain Boniface and Andrique Allisop in action in the finals.

The following are some comments from our readers.

Hazel Shireen Jacques Mathiot: “It’s super and I think he will win the gold medal by another KO tomorrow (today). He is our local Tyson.”

Alvis Nourrice: “One can see that it was one that he definitely planned to drop. You can notice from the video that he was carefully waiting for the perfect moment. His techniques are often seen in videos of the legendary Mohamed Ali and also Roland Raforme in the past. They tease you with one hand, sacrifice themselves and let you tire yourself and throw light punches before they throw in the big ones and knock you out. Keddy is definitely a star Seychelles needs to back and help develop further this sport.”

Marie-May Jacques: “Thank you for allowing me to give you my views about the KO. WOW! That was a bomb! I was so excited and could not sit as Keddy made his way into the boxing ring ... I knew it would be a KO. As for tomorrow (today) it will be the same thing – a first round KO for Keddy. Our prayers are with you all and Seychellois will be singing victory all over the island. Ale Keddy, Ale Sesel. KO For Gold!”

Tani Charlette: “I did not watch the fight but in the office today (yesterday) everybody was talking about it. But I wish him all the best for a win in the final.”

Lenny Philoe: “Be Keddy i for. I pe pran sa meday lor.”

Lize Accouche: “I thought the KO was awesome. Wish I had that kind of power in my hands. Lol. I wish him all the best. Do not fight with strength, absorb it and it will flow, use it. Only then can you become ‘powerful beyond measure’. We want to see more of that KO in the final. You’ve got it!”

Lubina Constance: “For me the KO by Keddy was a big shot. And for the final tomorrow (today) I wish him the very best of luck and I believe he will surely win the final. Go Keddy. Ale Sesel!”