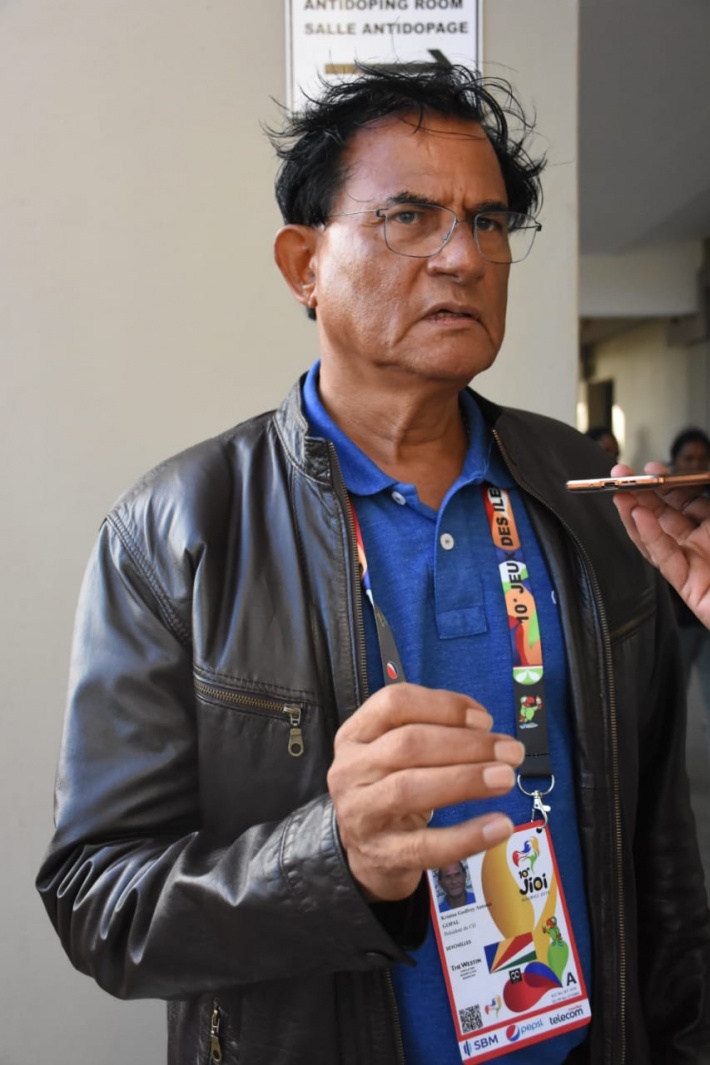 With the curtains officially down on the 10th Indian Ocean Islands Games held between July 19-28 in Mauritius, the president of the Conseil International des Jeux, Seychellois Antonio Gopal gave a rather positive feedback on the organisation of the 10th Games.

Krwar e Reisir magazine caught up with the Conseil Internationale des Jeux (Cij) president where he talked about the organisation’s vision for the next 20 years, as well as the presence and active involvement of high government officials from the countries bidding for IOIG 2023, all backing up their countries for the 11th Games flag.

Krwar e Reisir: Mr Gopal, after nine days of competition, are you satisfied with how everything went on?

Antonio Gopal: The organisation of the Games went well. My biggest appreciation goes towards the different sporting federations who have worked in a professional manner to ensure the proper running of the different events. We have also noticed that the level of the athletes has gone up considerably, notably in track and field, while some countries brought fewer athletes. But in general I am very satisfied.

Krwar e Reisir: There was an issue with the availability of tickets and access to the different sports venues, has Cij taken note of the problem?

Antonio Gopal: Yes we took note of the situation. Firstly, there were two types of tickets allocated to the delegations and the issue was resolved. It concerned tickets for members of the public and for those who are from abroad which was a problem. But then I realised the tickets were allocated to the sponsors. The people were complaining that there were a lot of empty seats, yet there were no tickets available. At the end of the day, the sponsors decided whether they wanted to come, or not.

Krwar e Reisir: Do you think it was normal for the organising committee to wait after four days to make all the competition sites free?

Antonio Gopal: No it is not normal, but it all depends on the host country whether access to some venues should be free, or not. If a venue is small, it is normal to have a limited number of tickets, but if a site is big, you can always give out free tickets. I do not really understand the logic, but in the end they decided to give free entrance at the venues.

Krwar e Reisir: As a Seychellois, are you satisfied with our country’s performance?

Antonio Gopal: As you could see, we have been performing quite well. We have a number of new talents that need to be nurtured. On the other hand, I noticed that we were missing in certain elements in certain areas, for example in athletics. On the other hand we have excelled in swimming where there has been considerable development. But, I can also say that we have not been performing well in certain sports disciplines where we used to excel in the past.

Krwar e Reisir: What is the reason behind that, according to you?

Antonio Gopal: It is just a question of planning. Most of them intensified their preparations a year prior to the IOIG. You do not normally intensify your programme within a year ahead of the Games. You just put in the final touches.

Krwar e Reisir: There is a strong feeling the Comoros are disliked by Cij …

Antonio Gopal: Let us get one thing clear, the Cij is made up of representatives from all the countries taking part in the IOIG. Therefore, a country cannot say that it is being disliked. It is not normal. On the other hand, it is also a question of behaviour. We cannot force love and friendship. These should come naturally. We should not seek to offend anyone, even if we all have different opinions. We should learn to compromise.

Krwar e Reisir: We have noted the influences of heads of States who are battling for their countries to host the next Games. Does that influence the Cij?

Antonio Gopal: I will not deny it. But a government can always back its National Olympic Committee.

Krwar e Reisir: So, how would you interpret the presence of the heads of States at the Games then?

Antonio Gopal: It is a pleasure to see their interests. In the past, the Olympic committees were alone. But nowadays, the governments have realised that sports can help and play a major role in the development of the countries.

Krwar e Reisir: As a founding member of the Cij, how do see the evolution of the organisation?

Antonio Gopal: It is a huge development. Compared to 1979 when there were only four sports federations, now there are over 30. It is true that they are not all Olympic disciplines, but they all have a role to play in the development of sports.

Krwar e Reisir: Where do you see the Cij in 30 years?

Antonio Gopal: Our vision is clear. We will be on the same level as many other countries in the world. We already have members with Olympic, Commonwealth and All Africa Games medals.