‘Marek Trajter was deported as an illegal resident’ |21 September 2013 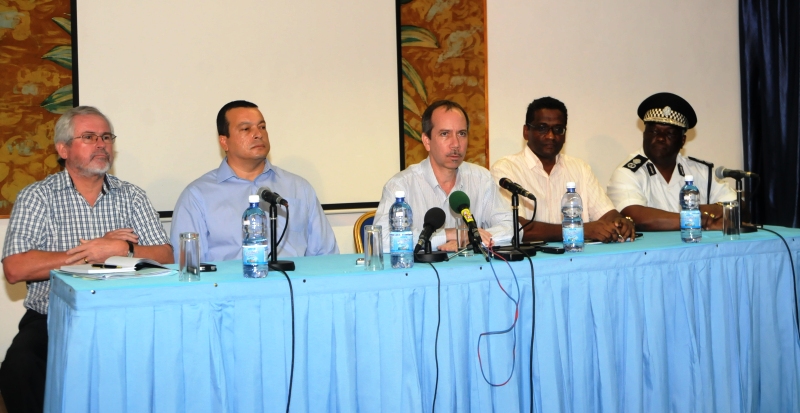 Marek Trajter was deported as an illegal resident whose Seychelles’ nationality had been revoked and thus had no legal status to support his stay in Seychelles.

This was revealed by the Minister for Home Affairs and Transport Joël Morgan when he explained the circumstances and raisons-d’être of the deportation of the Slovak fugitive by a chartered flight early Wednesday morning.

The minister was speaking to the local press yesterday in the presence of the principal secretaries for Foreign Affairs and Immigration, respectively Maurice Loustau-Lalanne and Charles Bastienne, the Commissioner of Police Ernest Quatre and the Attorney General Rony Govinden.

Minister Morgan explained that the deportation decision was taken after Mr Trajter had lost his Seychellois citizenship gained in April of this year based on proof that he had lied on the year of his first entry in Seychelles – stating 2007 instead of 2012 – and was wanted by the Interpol, Europol and the Slovak authorities. Two consecutive attempts to fly him out of the country had also consequently failed.

Reports had since suggested that either he had himself refused boarding or commercial aircraft pilots had not permitted him on board.

Reviewing the legal procedures which had preceded the deportation, Mr Bastienne said Mr Trajter was served with a Prohibited Immigrant Notice (PIN) on May 2 this year. He added that as the latter refused to sign the PIN meaning that he refused to comply with it, he was consequently arrested by the police. However, when presented to the courts, it was ruled that his arrest and detention were illegal as procedures had not been properly followed.

The principal secretary for immigration went on to explain that as his department insisted that it had taken the right decision, a commission of inquiry headed by Judge Anthony Fernando was appointed with Mr Trajter’s consent. As the commission ruled against him, he was again deprived of his citizenship and given 30 days to leave the country.

Again not satisfied with the decision, Mr Trajter filed for a judicial review of his case and this was subsequently crushed as this time Supreme Court Judge Karunakaran ruled that the interior ministry’s decision was right. As the ruling was later confirmed by the Court of appeal, the immigration authorities issued a third PIN, which for the third time the defendant refused to sign. Mr Bastienne explained that, had Mr Trajter signed the notice, he would have been given 48 hours to appeal against it. He rather filed a fresh case for illegal detention which was rejected by Judge Bernardin Renaud who ruled that the Court of Appeal’s decision should stand.

On September 7, 2013, it was arranged for Mr Trajter to fly out of the country by a Condor flight, but according to Police Commissioner Quatre, he refused to get off the police vehicle in which he had been transported to the airport. The police took him back in custody where he stayed for one more week before another attempt to board him on the same flight again failed. This time the pilot refused to take him on board although the police claimed that all necessary travel arrangements had been made with the only airline currently flying directly to Europe.

After the second failed attempt, the Seychelles’ authorities felt that as Mr Trajter is considered as a very dangerous individual wanted back in his native country for the 1999 murder of his business partner, and as he had defied a court order by refusing to board a regular flight, they had no other choice but to charter a flight for his deportation.

Answering to suggestions that this final deportation was also illegal as a writ of Habeas Corpus filed by the deportee’s lawyer, Anthony Derjacques, was due to be heard on Wednesday, the Attorney General explained that judgment in the case had already been delivered and that the Judge had not asked for Mr Trajter to return to court.

Claims of Mr Trajter’s alleged statelessness which could have spared him of deportation were also turned down as it was established that he was not stateless, given that he had never lost his Slovak nationality. Mr Govinden concluded that he was satisfied that all actions taken by the Republic of Seychelles against Mr Trajter were legal and constitutional and that the latter had exhausted all legal avenues available locally.

Reports that Mr Trajter’s presence was not signaled when the plane transited in Abu Dhabi, suggesting a form of human smuggling and trafficking, were also refuted by Minister Morgan. He rather ensured that the United Arab Emirates’ authorities as well as Interpol were made aware of the passengers’ list.

Minister Morgan also joined Commissioner Quatre in denying that Mr Trajter was mistreated or even physically abused while in police custody.

He said that the latter tried to hurt himself by hitting his head against the police vehicle’s window when being transported to the airport. Mr Quatre informed the press that in spite of the accusations, Mr Trajter never asked to be seen by a doctor, and one requested by the police reported that the detainee was physically fit and his body showed no sign of physical abuse.
To this, the minister added that he will never tolerate human rights abuses in the police force or in prison.

On allegations of corruption involved in the naturalisation procedure, Minister Morgan said that he had reason to believe that the legislators who had certified to Mr Trajter’s good character and facilitated his citizenship request were acting in good faith and that they had at that time ignored the applicant’s criminal history.

The Attorney General added that the situation does not exclude the eventual prosecution of the sponsors based on a complaint made to the police accompanied by credible evidence to support it, although the immigration principal secretary admits that his department made a mistake in failing to determine Mr Trajter’s formal entry date in Seychelles.
Mr Bastienne, however, added that it was the onus of the applicant to refrain from false representation.

Minister Morgan concluded the press conference by stating that Seychelles will not tolerate mafia and international crime. On this note, he announced that in line with what President James Michel announced in this year’s State of the Nation address, the government is currently reviewing the Immigration Act with the introduction of new parameters in view of making it more modern and more transparent, with clear requirements and criteria for citizenship eligibility.