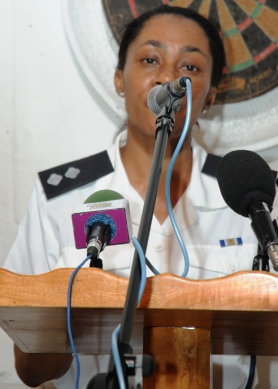 at the police headquarters.

The activity was organised in conjunction with the Ministry of Health to commemorate the ABC Safer Sex Week celebrated from March 25-29, 2014.

In his opening remarks, Superintendent Ted Barbé told the audience that the activity showed that the police do not just make arrests but are working partners in the community.

During a short address to introduce the programme, inspector Nancy Henry said on behalf of the organisation, the community policing has decided to do something different this year, something which it believes will have a great impact on those present that day which also consists of students from secondary schools and representatives of the Wellness Centre.

“As members of the police, our main objective as you know is to protect the community, prevent and detect crimes. But we have to keep in mind that in the community policing there are much that are needed to be done like educating the whole community about various issues,” said inspector Henry.

She said since last year they have come with new initiatives and they have started organising health talks at organisation level in conjunction with the Ministry of Health to show the officers that they do care and are concerned about their health.

Inspector Nancy described community policing as “the heart of the police force”. She said as the president and ministers always say that the police should go to the community, go to the public and not wait for the community to come to them that’s why they go to people’s houses, see what is happening there and how they are living in their community.

“And if there are problems we can deal with on the spot we do. We also go to schools and do presentations at various levels like with teachers and parents,” said the inspector.

In a charitable gesture to the health ministry, inspector Barbé presented R3,000 to Sheryn Raoul, the health promotion officer for HIV/Aids in the Ministry of Health as the community policing contribution towards the ministry’s Aids awareness activities.

The money was collected on World’s Aids Day last December 1, 2013 when they organised a sponsored walk and also made ribbons for officers to wear and these same officers made a financial contribution.

On behalf of the Ministry of Health, Mrs Raoul said she really appreciated the gesture and hailed the community police for the good working relationship, noting that the police officers always give their support to all activities organised by the ministry.

The activity also saw testimonies from three young people who are undergoing treatment at the Wellness Centre. They explained the sufferings one goes through when being a drug addict and appealed to the students present never to start doing drugs.

In tears, the young addicts expressed their will to get out and noted that with God’s help and that of the Wellness Centre they know they will succeed.

Perseverance MNA and Airtel bring more cleanliness to the district   |27.09.2021

‘It is impossible to give up educating without renouncing education’ |27.09.2021